Ever wanted to live in the world of Joss Whedon's Firefly but in bright colors and the lording government replaced by a loan shark? Well RokSoft has you covered in their new, Android game, Space Trading Profiteer. A turn-based strategy game of trading and hauling cargo, you'll get the vague feeling that you're playing Pocket Planes in space. With a single goal of rising to domination over the eight other traders, who will be the first to garner 1 million Chings and corner the transportation of black market goods? Or the less exciting legal stuffs, if you don't like the excitement of running from the cops. 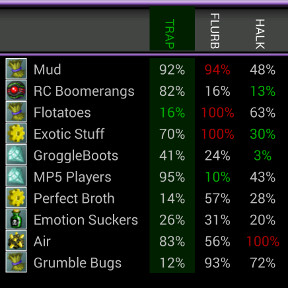 A beat-up cargo ship and a debt of 60,000 Chings: who could ask for a better way to start a transportation business? Now you just have to choose the right cargo and the right destination to make the most profit. To make this game of supply-and-demand more complicated, there is so much more to worry about, such as the cost of fuel, loan interest, pirates, asteroids, the other traders buying up all the goods before you, and, worst of all, the menacing police on the look out for black market goods (indicated on the market screen with just the cutest little green bottle with a skull and crossbones). But, really, with all the random events and the slightly different experiences while on each of the nine planets, it's hard to describe all the possibilities without just shoving the game into your hands. It is all about balancing the marketplace, upgrading your ships and keeping the moneyman off your back.

RokSoft has done a good job of creating an addicting and easy to play mobile game. Really, those two qualities make the best combination for a title that you can play for five minutes while in line at the bank or for the full hour you're always kept in the waiting room at the dentist. Space Trading Profiteer has three difficulty settings to choose from, allowing you to adjust your fun depending on whether you like a game to be more or less casual. On the downside, there are still some features left to be desired such as being able to pick exact amounts when exchanging goods or money rather than just a sliding scale or the fact that there isn't an end game beyond 'first to 1 million'. But considering the fact that the developer has openly asked for recommendations on future updates, any aspect of this game found lacking could potentially be changed. There's nothing more that I appreciate than an updating developer who listens! So if you're up for it, give this science fiction mobile game with a unique sense of humor and fun, jazzy tunes, ten in-game weeks of your time to try it out.

Thank you for choosing to review our game. Taking up on the point about our asking for suggestions for future updates, we have been asked for, and are currently working to implement, cloud save, online multiplayer modes and various new gameplay features. Updates will be getting released to Google Play over the course of this month.