Just because you're a hero doesn't mean your heroics always pay off. In fact, you fell in the final battle against a dark sorceror, and though he was struck down as well, centuries later he's decided death is for suckers and he's risen again... and that means you need to do so, too. In Iconic Games' action RPG Specter Knight, your old bones have been animated once more, and you'll need to hack and slash your way through randomly generated dungeon floors, leveling up and upgrading your equipment along the way. Use [WASD] or the [arrow] keys to move, hold the [spacebar] to defend, and click to interact, though you'll automatically attack any enemy within range. Just watch your health bar, since while enemies not only drop experience for leveling up and gems to spend on upgrades, they can pack a mean punch. You can activate any spells or special abilities by clicking their icons at the top of the screen, too. Since the dungeon layout is random, you'll find lots of secrets, treasure, and even the odd boss fight or three, though many doors will require you to find keys to unlock them. Die, and you'll reanimate back on the first floor, with your equipment, levels, and gems intact. All of which sounds like very legitimate hero-ing business, but I have to question the authenticity of any so-called hero who doesn't speak entirely in HYAAs and HUTs. Just sayin'. 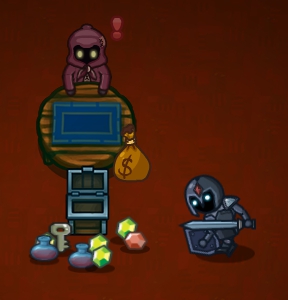 Specter Knight is one seriously cute little dungeon-crawler, though on the whole it's also a little slow-moving. Trudging through the floors feels like it takes just a little too long, though the combat does tend to favour a more careful approach with its focus on blocking (which costs a shield, which in turn regenerates slowly), dodging, and use of spells, so maybe when you play it the way it's intended, it's exactly as fast as it needs to be. The game tends to favour strategy and hit-and-run tactics rather than mad stabbing, and boss battles are a lot of fun with their varied attacks and tactics. While the dungeons could use a little more visual variety to spruce things up as you stab your way through eyeballs and bandits, especially since dying kicks you back so far, but the game's presentation is on the whole bright, colourful, and well done. If you like your games with a bit of grind, Specter Knight is a well put together action-RPG that feels like it hearkens back to old-school console play with more modern trappings.

does anyone know if there's another ending past

beating the 4 bosses? the end text kind of suggests there's a bonus boss but it takes so long to walk through levels that I don't want to keep going infinitely if there isn't.

anyway, pretty fun and addictive .. spells are completely OP and after the first few levels I never used my shield at all. Maybe nerfing the spells a bit would increase the challenge, it got sort of dull towards the end.

I built a melee character with maxed-out speed, minimal defenses, no spells, and no charged attacks, just dashing in and rushing back. After I figured out what I was doing and beat the first boss, I made it to floor 11 without any further deaths, even taking out enemies like Dwellers that the game specifically recommends against meleeing. Then I ran into my first Haunted (which can freeze you in place for a few seconds), died almost instantly, and quit playing. It was fun while it lasted.

I think it's a lead to the next game. I played the 16th floor again and I just fought the last boss.