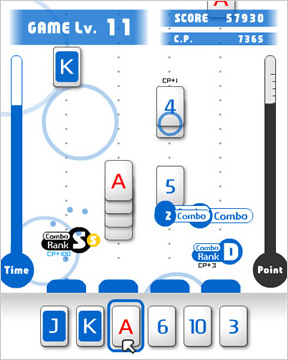 Over the years I have often said that it's either feast or famine when trying to find quality games to review. We are currently in one of those feasting periods, so roll-up your sleeves, it's time to eat. I sure hope you're hungry.

SpeedCluster, by Game-Pure, is an arcade Flash game that is remarkably easy to play: just drag cards from along the bottom row onto one of the four blue markers at the base of each column where random cards will fall. The cards you drag must be either one higher or one lower in value than the one that is falling. This forms a combo, and you earn points for additional cards that you add to a combo before it disappears out of play. You also earn time for creating combos; precious time with which to continue playing. The game ends when you run out of time.

What's not so simple to understand is the scoring structure the developer has created for the game, which seems to be based upon earning "C.P.". All of the points you earn during a game, along with any bonuses for maximum combos, number of cards, etc, are converted into C.P. which is automatically accumulated and saved for you each time you play. You level-up each time your C.P. reaches the next goal visible in the lower right corner of the title screen. What effect, if any, those levels have on gameplay is still unknown to me.

Analysis: SpeedCluster is a beautifully designed Flash game: simple and elegant, and with impeccable presentation. The visuals are very appealing, the soundtrack equally so, and the gameplay is highly addictive. This game succeeds on many levels.

What I'm finding hard to swallow is the choice of drag and drop for the core mechanic. Yes, it probably seems to be the obvious choice to make here, but when actually playing the game the rapid and repetitive motion becomes quite tiresome. And, on slower computers with performance issues, the drag-drop mechanic may even be too sluggish for the game to be playable. Part of the reason for this is the use of a custom cursor, which always seems to cause performance issues in the Flash games I've seen them used in, and I'm not convinced the larger cursor is really necessary for this game. Ideally, the game would benefit from a touch-screen interface, such as on the Nintendo DS.

Minor gripes aside, if your computer can handle it, this is definitely an addictive little game that will find you coming back to it again and again.

This game could benefit from some really irritating music, because currently I can't seem to tear myself away.

got to lvl 28 and now i think i have carpal tunnel syndrome. OWWWW!!!

I love playing Speed, especially against people who are really good at it. This game is awesome. Great find, jay!

If there are any multiplayer games of Speed out there, I'd be happy to play any of you.

There is a multiplayer version of Speed available for the Nintendo DS within the casual games collection: Clubhouse Games, which is just the basic card game. It lacks the combos and excitement that Speed Cluster offers.

Wow, that puts my scores to shame. I can't live long enough to get past level 40. The cards they give me push me in the direction of a long chain, but they don't give me the next card I need to start the chain.

And yeah, I already own Clubhouse Games. Fun stuff, it is. There's also a version of Speed on New Super Mario Bros. for DS, but it isn't online.

I'd like it better if there wasn't any lag with my cursor. (old PC)

ah, my days of childhood card games are coming back to me. i used to play a couple of two-player variants of this game. this game is almost exactly set up to mirror them. with cards randomly falling and stacks disappearing, it's almost like having a second player playing on the piles you are.

as for scoring or timing, heck if i know. i barely even looked at the timer bar until the game was over. (happy ol' ex-post-facto.) i'd really like to know what the scoring was behind this... at the beginning of the game, i got lucky and hit a string of about 14-15 cards. so with that, i somehow reached level seven in less than thirty seconds. i even paused to let the points meter fill, but it just kept going.

those technical things aside, this is a fun game. i raise a fork to you jay, and may the feast continue!

Oh man.
Just...man.
At level 126, the cards literally FLY down your screen.
They're like rain in a massive hurricane.
It gets so fast, you have a better chance of getting points if you randomly shove cards everywhere than if you wait.

Extremely fun, fast-paced game.
I'd compare it to a circular game of speed, with you in the center, with random people throwing cards at you.

Well, I thought I might as well figure scores.

Hope I got the spoiler thing right.
And could someone translate the "Lv."'s that you get on the title screen?

I LOVE THIS GAME! It's so much fun to play. My one complaint is that it stole musical focus from Pandora, but that's about Flash Player, not the game. :-P

Very fun game!
I got very lucky with the cards I was given and so I managed to make a 39-card combo at the very start. Then without having to do anything else I managed to get up to level 27 and score over 100000 points. I then promptly died. :)

(Just realised that there's someone else here called Albert, this might get a bit confusing)

Got tired after level 19... I don't have much patience... maybe if the game changed more as you go on?

I like how the game picks up the pace for you, making the levels gradually more and more difficult. I probably could have gotten further, if not for the sluggish cursor action.

Ouch... it DOES hurt... my wrist i mean. It is an excellent game btw. But i think it could benefit from better input, perhaps with a keyboard?? Example:

So if i wanna send a static card (extreme left, which is now Q) to the 3rd row, (now 3) it could be done. Don't you guys think so? I suppose we'd get better scores...HAHHAHA

I adore this game. Favourited it instantly! First effort got me to level 24. And I can assure you that there will be many, MANY more efforts.

I have a slightly older pc as well, and I found this game unplayable. The added-in curser moved much to slow to be able to enjoy this game...which is a shame because I love new card games, and so many others have posted how much they've enjoyed it. But on an older computer Jay got it right, it's unplayable! :(

Is there a way to pause the game?

arrrhghghghhg... this music is SO familiar... but I can't remember where in the world it's from... All I know is I've heard it before... does anybody else know?

OHHH now I remember!
The music is from the PSP sampler disc, the one that comes with the Mega Pack or whatever!

Wow. That was an awesomely fun game :D

Make sure you rest that arm good before playing again. ;)

This game is favorite in the past week or two, it rocks and is fun!

So I'm thinking that C.P. may stand for "cards played"?
The more cards you play, the larger your bonus.

yeah it's very uncomfortable to have the slight lag with the pointer. Otherwise it's a great game! I had one game like this in my old Super Famicom, always loved that game.

I got to level 24 in my first try, but don't really want to try again, too tiring.

I think I figured out what C.P. is

however I do know what the lvl thing says.

above the lvl it says 'anata no spiido wa' which means 'your speed (is):'

That's one go. The first go. the ONLY go.

Sorry to say I didn't really note down my values for the other scores, cards and such.
It finally overwhelmed me because hand was twitching, and I honestly couldn't hold the mouse anymore because my pinkie had locked. hahaha Also, the drag mechanism would freeze on the faster levels and I missed a good few cards.

Still, I was pleased. MAN that thing just goes on and on, doesn't it? I must've been played for at least twenty minutes straight.

I'm just really thrilled with myself that FINALLY in all of my time on this website, I finally get to post the comment with the highest score. (I think, did I miss someone's?)

and P.S. about the C.P., it racks up with every game, so it doesn't reset to zero. If you're on level 30 with a C.P. in the 10,000+ range, you've obviously played a couple of times, so I think it kind of loses its potency for being ranked on an individual game basis.

Wish I'd taken a screen shot of mine for the values. Oh well.

Love this game! One of the better finds here at JIG. Thanks, Jay!

i got a triple S once!