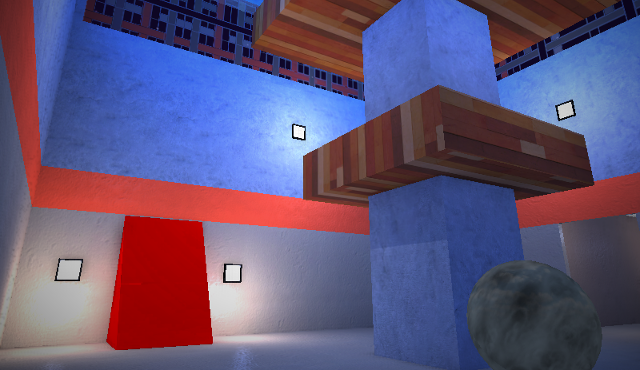 Sphere, a French/English first person platformer coded in Unity by Team Sphere, is an oldie from the middle of 2012. While the name may make you think of Michael Crichton, it has absolutely nothing to do with his book with the same name. If you want to compare it, you should rather use Portal as a measuring stick, although (sadly) the total number of portals in-game is zero. The game did however win Hits Playtime (2012), and was a finalist for the Best Student Project in the Unity Awards (2012).

You control the movements of the protagonist with WASD (not remappable), and you control the sphere with the mouse. Left clicking allows you to throw and retrieve your sphere, which can manipulate far away objects. The catch is that you will obtain the ability to record the movements of the sphere, and then to fling yourself in the same way as this recording. This allows for some interesting puzzles, delving deeper into the mechanic of predicting trajectories. By opening the menu (Escape key) you can adapt the quality if the game runs too slow, and there is options for mouse sensitivity, inversion of the Y-axis, and a crosshair.

But, since Sphere is a bit aged and was born in the beginnings of Unity, there are also a few flaws. The collision detection is a bit odd sometimes, and what should be solid may sometimes allow passage. It also appears that the developers intended that the saved trajectory should be displayed in real-time, but it does not quite work. As of now, the download links for Mac and Windows are broken, but attempts to contact the developers to fix this are being made.

Sphere relies both on the mood and on the gameplay, and manages to be both obscure and simple. Such is the case with the not too lengthy narrative, composed solely of an intro and an outro. The simple graphics and the calm and light music also adds to this feeling of peaceful ambiguity. So, what is the mystery of the sphere? Play and see by yourself!

Note: the game is a unity game. You need to use a compatible browser in order to play the game. Mozilla for instance. And then authorize the plugin

Fascinating game. Am having some trouble partway through, though.

I got past the first room where it looked like the gap was too far to throw over.

There is a thin ledge on the right, which I was able to bounce off of after quite some effort.

But that strategy doesn't work on the second such long gaps.

Hah! Never mind... figured it out. This is really clever!

You can point yourself in a different direction for a right-click, and will still follow the same *relative* trajectory.

Pretty sure I played this before here. But fun game again!

Can anyone explain why I can't play this game? In both firefox and explorer when I click 'play' both have a "download unity" link. I HAVE unity player installed! I can play other unity games like the last 'puzzlehs' audio game, just fine. I would like to play sphere but what the heck am I missing? Any help would be appreciated.

Same problem as oreilley, but I'm on Chrome. What gives?