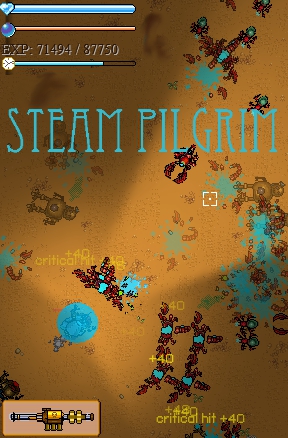 When monsters are rampaging all over your quaint steampunk countryside and people are dying left and right, what do you do? If you said anything other than "send a lone, woefully underequipped soldier in to deal with things singlehandedly and make him pay for the things he needs to save our sorry lives", then sorry, you fail your test at being a top-down shooter protagonist. Steam Pilgrim, by LMAOtheDoom is a game about you and your armored suit getting dropped into hostile territory via airship and trying to survive the oncoming hordes of baddies until your ride shows up. Keep moving and shooting to stay alive and level-up for skill points you can spend on abilities, and hold out until the timer on the landing pad reaches zero so you can escape. (If you die, you won't earn any cash to spend on upgrades, but you will keep any experience points you earned.) Use the [WASD] or [arrow] keys to move around, the mouse to aim and shoot, and your number keys or mouse scroll wheel to swap between any weapons you've purchased. Crates and sometimes enemies will drop everything from useful power-ups to experience point bonuses, and in the fine tradition of every video game ever, the little gray round barrels can be shot to explode and take out groups of enemies.

The top-down shooter is hardly a new concept; they've been around roughly since China created gunpowder all those centuries ago. (You saw the ancient Chinese scrolls about how the dynasty was all about the achievements and the section on pwning newbs, right? What are they teaching you kids in school these days?) But while Steam Pilgrim doesn't exactly provide revolutionary gameplay, it does provide a solid example of the sort of shooty-poweruppy-blammo-wahey action that makes the genre so entertaining. The sheer number of enemies that can flood the battlefield make things feel appealingly frantic at times, and being able to stay as long as you want in each area allows you to ramp up your carnage. That being said, however, Steam Pilgrim does demand rather a lot of grinding to be able to afford skill upgrades so you can proceed, and it's hard to shake the feeling at times that it's both more than a little mindless and trying to seem longer than it really is. If what you crave is simple, chaotic blasting action, however, and some really neat weapons to splatter things with, Steam Pilgrim is an excellent choice to while away some spare time.

The game is fun until level Sands. It's so ungodly hard that it makes the rest of the game feel like a cakewalk. I can't beat it.