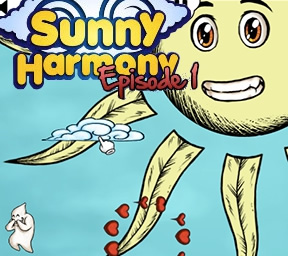 Generally we like to open these reviews by telling you some basic information about the game, you know, like the genre and the plot. Personally, I've always found this part to be the easiest. But Sunny Harmony, an... action game? Yes, let's say action game from SiJaf (Sina Jafarzadeh) with art by Taw Studio, is hard to explain without sounding like you're sitting in a campus cafe, possibly under the influence of something, trying to explain a dream you had. "There's like, this sun, right? And you have these clouds. And it's all cartoony, but not exactly like Looney Tunes stuff, more like something someone drew with crayons, but not like a kid drew it, if that makes sense? And you're trying to keep dark clouds from getting over to the sun, so you pull pieces of the clouds off to make them lighter. And you can throw them at these, like, giant dog heads and flying kangaroos with boxing gloves and they explode into coins. Or sometimes these fish would jump up from the bottom and belch teddy bear heads and skulls at you. I don't know, does that make sense? I guess you had to be there, man. Inside my dream, I mean. It's a crazy place."

What you have to do in the game changes frequently throughout the eight levels, but the one constant is that you're using your mouse only. The game tells you exactly what you're supposed to do for the current section. It's usually some variation on throwing projectiles (click to grab, move for momentum, release button to let go), or some variation of mousing over "good" objects and avoiding touching "bad" objects. Two meters at the bottom of the screen indicate your health and how far along you are in the level. At the top are controls for sound, music and pausing the game. Between levels, you can click on a difficulty cloud to change between easy, medium and hard, and buy more health if you're trying to complete the game all in one go. 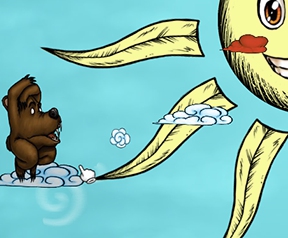 Analysis: Analyzing this game is like analyzing a dream, with probably about the same ratio of deep truths and profound misses. "Hmm, yes, well, I think that the turtles with the cannons on their backs symbolize an awareness that at some level in your subconscious id that it is turtles, all the way, as it were, in a sense, down. Also, your mother."

Game mechanics wise, it took me a little while to get the hang of launching the cloud bits with the kind of speed and precision necessary at the harder difficulties and levels. Users with a trackpad may want to stick to easy. However, once I got into the swing of it, I really enjoyed the hectic pace. This is a game that requires keeping your eye everywhere at once, since the little cloud particles can easily hit a fluffy white cloud turning it dark just as it's about to sail off the right side of the screen. It's a little bit of a time-management-esque adrenaline rush, attempting to kill baddies in one corner, collect bonus items in another part of the screen, and manage the clouds to keep them bright and happy. While the mouse over/avoid sections were a great way to rack up some health, if my health was in good shape already I sometimes felt like they dragged on a little long. Aesthetics-wise, a lifetime of media consumption has trained me to expect sudden grotesque carnage at some point when faced with overt relentless cheer and covert macabre distortion, but it never arrived. Either Sunny Harmony is really putting on its A-game when it comes to messing with my head, or the game is genuinely as blithely upbeat as it seems.

The strongest recommendation I can give to Sunny Harmony is that it has to be played to be believed. Like Doeo or Katamari Damacy, not only is it hard to explain this game, but even your first few minutes of playing it will probably be more "what in the Sam Hill is going on here" than "tra la la what fun". This is probably going to be one of those games with three camps: people who love it, people who hate it, and people who are just plain confused. In fact, the game reminded me a lot of that Monty Python sketch for "Confuse-A-Cat Ltd." Maybe, like that bored suburban kitty, we all need a little sheer randomness in our lives from time to time. You can certainly get your RDA of bizarre here.

There were comments yesterday, but I guess if they're not favorable for a game they're deleted?

Our database crashed last night from all the traffic our Best of 2010 is receiving and we were unable to recover some of the comments posted yesterday. Sorry for the inconvenience. :(

Indeed. I just noticed my comment was deleted. Had I really been the first to comment? Or were other comments deleted before that?

To my recollection, I was polite and grammatically correct, detailing SPECIFICALLY what I did not like about the game. I do not believe I was rude.

My comment was something along the lines of:
this game is repetitive. I was bored before the tutorial was over and quit after the first stage of level three.
Also the voice at the beginning/end is grating and painful to listen to.
I liked the music, though, as well as the concept. AND I gave it 3/5 shrooms.

I think I called it hardly worthy of a link dump Friday, let alone a feature of it's own. I think I also called it uber lame, and the next commentor agreed with me.

I played the entire game and thought it was fun. A nice change of pace. Thanks!!