What... the heck is going on here? At first glance, you probably think Super Amazing Wagon Adventure is some sort of Oregon Trail-related simulation game. But then you see words like "arcade game" and "side-scrolling shooter" and you suddenly think "Maybe I'm going insane? Maybe I've forgotten what words mean and I've just started seeing random flan horse topple red maneuver?". You can relax, however, as we're here to promise you that Super Amazing Wagon Adventure is everything the title suggests, and it manages to be fast-paced, crazy, and entertaining all within the first five seconds. 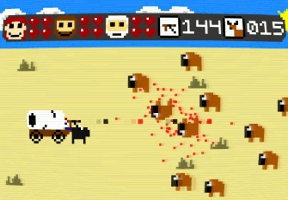 In the middle of the 19th century, hundreds of thousands of Americans hopped on wagons and migrated west to populate a great expanse of land that offered seemingly endless opportunities. It also offered bandits, starvation, disease, wolves, and according to this game, giant squid. Super Amazing Wagon Adventure puts you in control of a party of settlers as they fight the forces of nature throughout their journey. As the days go by, you'll deal with random events as your characters hunt for food, shoot rampaging buffalo, and make crucial decisions. Most of this takes place in a shmup-like environment where you move the wagon and fire at oncoming swarms, but if Super Amazing Wagon Adventure does anything well, it's variety!

The action in Super Amazing Wagon Adventure frequently shifts to side quests that help keep your health, food and ammo supplied. Or help you to die, depending on what you run into. You might, for example, be riding along when the game informs you one of your settlers went out to pick berries. At that point, you'll control that person picking berries. Then, a bear might attack. And when that bear attacks, a mob of squirrels might also attack. Or zombies. Afterwards you might get the chance to leap over a river (in the wagon, yes) or meet with some traders. You really never know what's going to happen next, and that element of surprise is just one of the game's many tricks to keep you glued to your keyboard.

Analysis: It's almost a fair comparison to say Super Amazing Wagon Adventure has the same frantic, laugh out loud appeal as games like Wario Ware or the Four Second series of browser games. That would, of course, be ignoring the game's main shooter-like mode and storyline it constructs with each passing event, not to mention the strange bond you form with your settlers as both you and they try to survive everything wacky mother nature throws in their path. But still, it's the same level of crazy action and entertainment, which is what counts!

Super Amazing Wagon Adventure is more than just a wild parody game. It's actually a deep, engaging arcade experience that weaves in some elements of trade, weapon and wagon upgrades, unlockable survival modes, and neat-o things like time travel. You'll likely survive only a few minutes the first few times you play, but the desire to see what could possibly be thrown at you next will keep you going back for more. Again and again you'll attempt the quest, and again and again you'll see things no pioneer ever laid eyes on. Or actual human being in any time period, for that matter.

So yeah, that's Super Amazing Wagon Adventure. It's heaps of awesome in every way possible. It's funny, it's filled with action, it's challenging, there's stuff to unlock, and there's a giant squid. Go play it!

Windows:
Download the demo Get the full version (Desura)