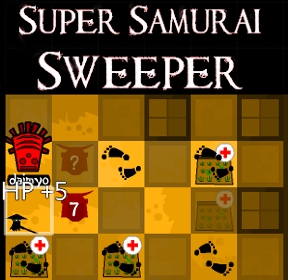 One of Nerdook's first games was the minesweeper-inspired mystery puzzle ClueSweeper, and obviously he has a soft spot for the genre because he's dipping in that well again to bring you Super Samurai Sweeper. This one ups the strategy quotient by making your tiny samurai's path to revenge against the shogun one-way only: you can't go back and grind earlier levels, so if you plan badly in the beginning you can get stuck in an unwinnable gamestate. Just make sure you think carefully and if you're worried, choose an easier difficulty level.

In each of seven daimyo levels plus the final shogun level, you're presented with a large board with tiles. You only have a limited number of clicks to find and defeat the boss. Click on tiles to flip them over. The territory effects (whether good, like bonus silver, or bad, like a booby trap) will automatically trigger, and if there is a party of mooks there, you can click again to fight them, which will make the final boss fight easier, as all undefeated mooks join the boss. You'll be able to see some things about the adjacent tiles which will help you decide where to click next. Footprints on tiles are especially important, as they indicate the direction of the boss. During levels, you can spend silver at a shop to buy things like extra time and better armor, and in between levels, you can spend experience to upgrade and expand your party.

During the battles themselves, the only way you can affect the tide of battle is by clicking on one of three specials (assuming you have enough kill-fueled chakra in your bar to unleash them), and you can also use this chakra to resurrect fallen party members. For the most part the AI is pretty good, but the archer has a disturbing tendency to either forget he's a glass cannon and charge right up to the boss, or stand stupidly outside of range and fire arrows at the ground. Maybe the ground insulted his grandma. The real fun of the game is in the main minesweeping sections. Since leftover clicks translate into major experience and final score bonuses, you want to hoard them, yet you also need to make sure you're ready for the boss, because dying wipes out anything you've earned in-level and dings your score to boot. Even which daimyo to fight first is a tactical decision, since different daimyos increase the difficulty in different ways (increasing mook numbers vs. buffing a certain class of mook for example). Truly a game for the cerebral ronin.

I've never quite figured out why people go so crazy over Nerdook's games. They're usually quite simplistic and about as visually/graphically appealing as Windows 1.1.

Oh this is *fun*. Best of Nerdook. I did run into some oddness after several games -- I've had footprints leading nowhere, causing me to lose a province.

Oh yeah, now I'm getting it all the time. Footprints leading nowhere, and I suppose no daimyo on the board.

I liked this one thoroughly.

With the good powerup-system, it could do with some more provinces.

I've actually had quite a good amount of success prioritizing the ally regeneration skill. At normal difficulty, I had problems related to learning the game, but once I beat it once, I was able to finish the other difficulties without defeats, despite some rather dicey situations.

This is yet another quality offering from developer nerdook. But the one thing I am compelled to say is that it certainly is "minesweeper-inspired" in that it takes a few notes, but does not function much like a minesweeper type puzzler except for the notion of tracking the Daimyo with his footsteps. Discovering that was my one note of disappointment in an otherwise enjoyable title.

Interesting game, tricky though. Apparently I'm really good at finding the Daimyo, but really bad at beating him. Which made me realize that those "permanent" upgrades are only permanent if you defeat him.

All remaining Mooks join the Daimyo fight so fight them if you can, thanks to joye for this info.

Very strange bug ... (on Hardcore, so far) though I don't have any defeats, my campaign eventually shows me with 2 defeats. Some odd saving thing, I suppose.

My previous report with the footprints may be due to my own error.

+ Going for the "10 clicks or less" star is best on the second province, with an ally.
+ The Market


+ I don't know how much of a difference it makes, but as soon as a warrior type is added, I buy the samurai's offense upgrade for that type.
+ I'm not a whiz on Training upgrades, but this is how I do it. If the Samurai dies, it's Game Over, so I max out Health whenever possible. I got stuck with an impossible game without enough HP. Brute doesn't seem to need much upgrading. I've not been able to max out Monk yet; he does not seem to dodge as much as advertised, an AI thing. Anyway, my priority is wiping out the field: Samurai's attack speed and Archer's damage. Swords and arrows have to get there, and be lethal.

If I have time, I'll come back and list the additions (enemies, terrain) to each level. Feel free to crib any helpful bits if you're doing a full guide.

Two things which might not have been mentioned (I've read through twice, but I'm fuzzy today).
Every conquered province will add an enemy advantage.
And surrounding each daimyo are the sum of all the remaining mooks in the province.
Both points should affect strategy. For instance, if a warrior type has yet to be introduced, adding a buff to them won't matter.

I agree on the archery thing.

I do wish there were some way to change strike/avoid priorities with the archer (standing in front of an enemy bowman and shooting the other way is my favorite ehhh moment), or prioritizing attacks on the enemy bowmen. The allies do a routine sweep back and forth of the field, but they often miss those guys who keep shooting their projectiles.

A wild suggestion, just for verisimilitude: make the samurai only pick adjacent tiles to explore, like he's actually scouting the land on foot. Now that would be *difficult*. And it would be awesome in a hex grid, too.

By the way: the art and music are quite beautiful. Recommended for a late night snack after watching melodramatic samurai anime.

I am having an issue where once I click on a province, I can't do anything else.

At the two lower difficulties, the Brute is kind of worthless. I frequently saw him lumber toward an enemy while my Samurai finished fighting a different enemy, turned around, passed the Brute, and killed his target for him. But on Nightmare, enemies have much more HP, so you spend more time whacking them and less time running from target to target. Then the Brute starts to shine. Meanwhile the Monk becomes less effective, unless you have enough energy to keep reviving him.

I agree that the archer is pitiful. The super samurai should commit super seppuku for commanding his allies so poorly.

Here's the thing... if you click on a square with mooks, and then leave it to fight later:

1. When you come back, you don't lose clicks.
2. When you come back, you don't gain any HP bonus.
3. Mooks can move around, and that revealed troop number can increase.
4. When you leave that square, you don't gain the experience... and more importantly, you don't gain the silver from the battle (delaying a permanent upgrade).
5. If you click around after (read: blindly), the HP bonuses from other squares cannot go over your HP limit.
6. So generally speaking, if you have at least one ally, I would recommend only skipping over the squares with FEWER mooks, because they don't yield much EXP/HP/$$$. You're unlikely to die before the boss battle anyway. Over time you lose more HP bonuses by delaying battles, and then a string of those battles will drain HP with no clicks/squares left to bring it back up.

Wooo, broke 400,000! There's a surprising amount of replayability (read: help, I am addicted) just in trying different strategies. And you really have to watch the battle, too; though the movements are random, even 2 notches of experience boosting does make a difference.