Sushi Cat has a dream: A dream of space. A dream of the moon. Perhaps he dreams of things people like us wouldn't believe. C-beams glittering in the dark near the Tannhäuser Gate. Or, more likely, he has dreams of the lifetime supply of sushi he will receive if he gets to the moon first. (He's Sushi Cat. He likes sushi. It's kind of ''his thing''.) Meanwhile, we also have dreams. Dreams of a game we've imagined since the release of the first Sushi Cat, where, instead of dropping him, you get to fling that cute little round guy through the air, collecting yummies and occasionally smacking into things. (Some dreams aren't very complicated). Point is, both of those dreams coincide quite well, and Jay Armstong of Armor Games and master-of-adorable-art Jimp must've realized it. The result is Sushi Catapult, an action-launch title one likes to think was conceived with the goal of adapting a pun into a full-fledged game... and a good one, at that! At the start of each level, click at the right moment to launch Sushi Cat with a powered shot from the cat-apult. In each level, you are given a goal to clear (collecting a certain number of sushi or traveling a certain distance), by avoiding obstacles and bouncing off of various boosters and collecting useful power-ups, and not-so-useful hallucinogenic mushrooms. You have also have a bounce meter, activated by clicking, which will give you a little more speed and air when you need it. Collecting Sushi makes you bigger, refills your bounce meter, and it also serves as currency for upgrades you can purchase between rounds. Complete all twelve levels (note to game developers: cutscenes are not levels. We can see right through that), and Sushi Cat might just end up a little moonstruck! 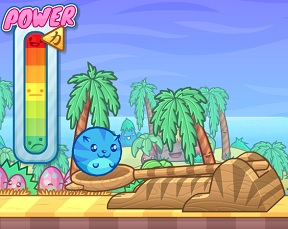 Overall, Sushi Catapult is a fun translation of the Sushi Cat style of pachinko gameplay into the mechanics of a launch game. Seeing those sushi meters fill up has never been more enjoyable, and the more focused goals of each level keep things from reaching that meandering "launch, upgrade, launch, upgrade" point that many games in the genre do. That said, the pace of gameplay is also noticeably slower than most genre titles as well. Part of the reason for this is the collection aspect of gameplay that the Sushi Cat series is known for, which means that it is only proper to slow things down a bit to ensure that the player can time their bounces correctly. However, will all of Sushi Catapult's moving parts, there's a big chunk of lag that comes along with it and, with no quality display options available, players might be reduced to playing "Browser Roulette" to get things working. But for all its memory leakage, Sushi Catapult is a visually bring and aurally cheery ray of sunshine in a series that has delivered many before.

I liked it. Just enough frustration for a slight challenge but not enough to make me quit. I would've preferred more upgrades, though, and more variation between levels.

I found this one extremely insubstantial. I didn't fail any levels after the few few, once I got the right upgrades going

Its all about bounces. Ignore most other upgrades. Max out your number of bounces first. Then you want to sushi magnet, bouncy beans, I'm not sure what order is best, but I maxed the magnet then the beans and it worked fine.
Just be strategic about your bounces. try to hit the launching items on the bottom, and hitting the powerups is a bonus.
Doing this, and the game is a cakewalk.

This game is disappointing from both directions. It's not as engaging as previous Sushi Cat entries because the only part of their gameplay it retains is collecting sushi with none of what made those games actually appealing. But it's not a good launch game either, lacking any of the variety and challenge of good entries in that genre (like say Burrito Bison). So it's just kind of there.

I'd rather have had another actual Sushi Cat game.

Sushi Cat! This was pretty cute, but as some others said, it was fairly easy once you got a couple of upgrades under your belt. Still, I found it entertaining! Cute graphics as always, and lots of silliness.

Is there a way to lower the quality? Nothing happens when I right click on the game but my computer is super slow...

I thought of Burrito Bison, too, and I was thrilled that this one had way faster rewards than that. Burrito Bison is probably the most tedious, slow-paced launch game I've ever played.

What gives? I remember playing this game some time ago... Was it rereleased? You tricked me into playing it again, but I had seen it all before...

Is this super clunky for anyone else? The Flash is really choppy and unplayable. I'm on an older Mac, but I have no trouble with other Flash games.