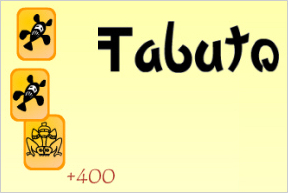 Filed under the "fast, furious and strangely mesmerizing" category, Tabuto is an arcade action Flash game by NinjaKiwi. Cards fall from the top of the screen at increasing speeds. Your job is to move the cursor over each one before it drops off-screen. The more you get in a row, the higher your score, but if you miss 20 cards it's game over. The goal is to stay alive as long as possible, which is much easier than it sounds. It's similar in concept to the Eyezmaze game Hatch, as well as to the classic Atari game Kaboom!.

Tabuto is surprisingly tough once you survive through five or six levels. Keep your cursor low on the screen and resist the urge to creep upwards to catch the cards earlier. Even for such a simple game, Tabuto is well-made and has a lot of style.

Cheers to Valarauka and Stephen for suggesting the game. =)

Looks like a ton of fun, but I can barely make it to the third level with my laptop touchpad.

Really fun game
And yeah at first I was using my touchpad, without any great success.. now with a mouse I can get to level 7... but not much more!
I think it's easier to watch the cursor than actually the falling pieces... well, with quick glances to the pieces...

Internal Server Error
No typekey for me I guess. Something amiss, Jay?

Yes, Eskimoscott, we've had a couple of server issues today. We're getting hit with surges of traffic that is causing intermittent trouble. Hopefully it won't happen again.

It may just be an impression, but I do not think the cards drop faster as the game progresses. They seem to get smaller instead.

Wow, this game is truly something! Certainly puts your reflexes to the test. Made it to level 6 with 250,470. Fun!

This game seems fun at first, but gets boring after a little while. It's like, even if you get to very high levels -- you can't boast about it.
1) There's no scoreboard - oww
2) No motivation to keep you going in the game
3) The game doesn't even save your highscore so you can try to break it.

A simpler Nest of Moai? Or did this come first?