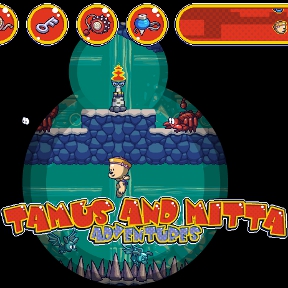 What do you get when you cross a stegosaurus with a bear? You get the lovable creatures in Tamus and Mitta, a new puzzleplatformer produced by Lartar Games with programming by Hector Sobrevilla and art by Axolot Studio. The sun has had all its toys stolen by evil bats, and it's your job, playing as either Tamus or Mitta, to get all 120 of them back (though you can finish the game with just 100) so the sun can shine again. Control your chosen stego-bear with [arrow] keys, jump with [X] and use an item or pay a fee with [Z], or customize these controls in the main menu if you like. You would think in a world where candy is used as currency no dark creatures would exist, but they do and they need to be jumped on and stunned!

The outside world acts as a level select area with the actual gameplay occurring in the mines. Although they are numbered, the mines do not have to be played in order and, in fact, you have to backtrack to previous levels as certain toys may be blocked by an obstruction that you cannot get through without acquiring the proper tool. Don't worry, standing at the door of the mine will pop up information showing how many toys you have left to attain there, how many miners to save and if there are any tools to acquire. This saves you from having to hunt through each mine to find something you need. Once you enter a mine, you'll only have your lonely candle (which has an upgrade later in the game) to help light the way, so you'll need to rely on the mini-map in the upper right corner to navigate each level. The map will only show the locations of the platforms and torches, but part of being evil toy-snatchers involves your eyes glowing in the dark meaning you can use your enemies ocular whereabouts to your advantage. As you progress in the game, the map becomes more valuable since you'll need to carefully plan your route to reach the next torch before your candle dies out. While you won't die if your candlelight fails, you will be sent back outside, losing all the toys you collected or miners you rescued during that run. Only exiting the level will save your progress.

Moles and scorpions and ghosts, oh my! Okay, so you're playing as a cute, cuddly creature buying your way into mines with candy and recovering toys for the sun. You lose candlelight instead of health and the worst you can do is stun a baddie. Well, don't let this kid-friendly exterior deter you from playing a well made, challenging platformer that will likely have you playing a few levels more than once. Even those of us kids who take vitamins that aren't Flintstones-shaped can appreciate this game. It's nice to see a developer create something meant for the whole family to enjoy. Gather 'round everyone and help out! Can you find the blue candies, get all 120 toys and get the sun back to its cheery old self?

Oh my gosh, this is so cute!

A platformer that's adorable, challenging but not frustrating, and still creative enough to maintain interest.

Kyh, you've made my morning. Favorited! =)

Playing through a bit more, this seems to be a relatively new game without online walkthroughs available for it.

There may also be some gameplay bugs which prevent playthrough once you get to Mine 4 and beyond. I may just be missing something, though.

In Mine 4, you seem to be only able to get 4/5 Toys. There's an area blocked off for which you don't have the proper equipment. After trying a few times, I went on to the next couple of mines and got a Master Key in Mine 5 or 6. Still that Master Key didn't seem to open the blocked-off area in Mine 4.

I'm not great with platformers, so it could just be me. But the game seems to have gaps in playthrough at the moment. No further advice was available for this online yet, so far as I could tell. Has anyone here found out anything on this?

@ Satori: Getting to that part of Mine 4 requires

the yo-yo which you don't get until

Is there any way to light the torches in the mine that are unlit?

Is it only me who knows that the bats from this game and "Sea of Gloomp" (correct me if I'm wrong) are references to Atari's "Adventure" involving a bat that moves/steals items to mess with the player?

Finished! Very addictive and nice level construction. To anyone who's confused, when in doubt, press [Z].

And: you find out later that time-bonuses are

rank capitalism at work! My cheery view of the world is shattered.

If the shopkeeper and his daughter have all these toys, why don't they donate them to keep the sun shining? Instead it's a little scam to net them some candy. Tsk tsk.

I loved this game! Challenging but not rage-quit inducing, and a solid length without feeling too long. As for backtracking:

Once I realized there were items in future levels I would need to full finish past levels, I went and skipped ahead to all the levels that had the items I needed so I could play straight through. The only thing standing in your way of this is needing to spend candy to unlock things here and there, but I never found it to be much of a problem at all. This made the game a lot less frustrating, since I rather hate backtracking. Also, if you really want to give yourself an edge, save up your candy to buy the lantern from the shopkeeper's daughter. It will still go out if you hit too many enemies, but it doesn't dim as you progress through the levels and makes it MUCH easier!

hmm. More dark areas. Light running out. Got to find something, but can't remember.

What was that noise? Oh gods, it's Mr. Face!

Oh I forgot to ask this before: Am I the only one who thought the skeletons looked like Xenomorphs?!

Is there a way to save? I first thought it auto-saved because is asked to store stuff on my computer and I didn't see a save button anywhere. Just super annoyed cause got to level 12 had to leave, exited the game, and came back to find my progress was entirely lost. :(

I'm having a problem breaking some rocks in the 14th mine. Any idea what's going on with that?

You don't find it until

I should have clarified - yes I do have that. I still can't break those rocks.

@guv: The items turn blue when you're able to use them. Is it doing that when you're in front of the rocks? I know I sometimes had trouble lighting torches, but usually not with the other objects.

It blinks blue for a very brief instant when I jump, but otherwise nope.

gotta say, I love the music for this game, it's awesome and completely nonstandard

@guv: I started a new game to see if I had any issues, but I'm not able to replicate your problem. But something did occur to me:

Are you talking about the horizontal rock instead of the vertical rock wall? Cause that needs a different tool. I have a feeling no, but thought I'd ask.

I'm not sure what to suggest. Maybe trying to play as the other character? Or hopefully you're not too far in and can start a new game. Sorry it happened to you.

No, I'm talking about

the vertical rock wall on the bottom level of the 14th cave with a small slope leading up to it and a possessed rock directly above it. I'm sorry, I really should have been clearer about what the issue was. I might just restart it, I guess. I tried the other character but nope no dice. There IS a reaction when I fall off the platform to the left of the rock but the wall still doesn't break. And, again, I want to be clear on this, I have all the equipment. I've even tried restarting Firefox just now, but nope.

In any case, this is a neat game, aside from that one strange and nagging glitch that I'm not really certain what's going on there.

A pleasant little platformer with Metroidvania leanings. I like it.

2) The oil lamp. Once you get it, it takes all the challenge out of the game! Before you get the oil lamp, every second away from a torch refill is tension-laden, and the game feels really effectively challenging and atmospheric. Once you have the oil lamp, there's virtually no difficulty left in the game; it's quite hard to hit enough baddies/spikes to actually die. I had expected the lamp to just double the length of time your candle lasts for, and I think that would have been better for preserving gameplay involvement and tension.

Nonetheless, it was a pleasant hour-and-a-bit.

I got the same problem as guv

Where's the bedratted master key? I've been all through 5 and 6 with no luck.

@ JIGuest: The key is in

8
If you look at the box that pops up when you stand in front of a door, it will show you the items in that mine.