Tasty Planet: Back for Seconds

For some reason, everyone loves collecting things that are smaller than they are. We're not so much interesting in gathering buildings as we are looking at them, but if buildings were pint-sized, you can bet they'd fill our pockets like lint-covered jellybeans. Tasty Planet: Back for Seconds from Dingo Games plays on this compulsion and puts you in control of a blob of gray goo that can eat anything smaller than it is. As you can guess, this is a dangerous thing to let loose on the Earth, but give it a time machine and all of the past and future could be in quite a pickle. 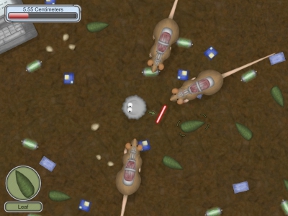 Like some human babies you might know, the protagonist in Tasty Planet will eat anything smaller than it is, gobbling up objects without pausing to chew. With each item nommed, the goo grows larger, allowing it to pick up even bigger items in its never-ending quest to keep eating. This all happens with a simple interface that uses either the mouse or [arrow] keys for movement. No jumping, no climbing, just moving and devouring.

Your size is constantly monitored at the top left corner of the screen. Once you reach a certain diameter, the camera bobs upward and gives you a wider view. A handy arrow points to the closest, largest object you can collect, and whenever an item is small enough to be eaten, you'll see a set of small icons surrounding it. It's extremely satisfying to fight with obstacles and run from enemies only to turn around and gobble them up a few moments later.

The time traveling mechanism allows for a nice variety of settings in Tasty Planet 2. There are six time periods to work through, each with its own unique things to eat, from the smallest piece of candy or scarab beetle to the largest dinosaur or satellite orbiting the Earth. You'll also find special stages that task you with escaping mazes or collecting a number of one kind of item. All of this takes place across 50 or so levels, some of which are unlocked as you play, and four different gameplay modes. 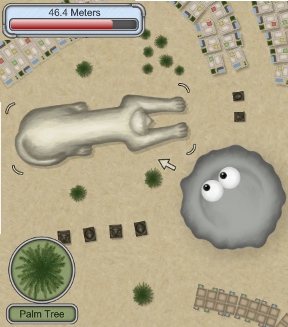 The gameplay isn't very challenging, but to be honest, it's not supposed to be. You can select timed mode to give yourself a bit of incentive to move fast, but apart from that, your only real dangers are creatures larger than you that might give chase, knocking your size down a bit with each hit. Certain stages are more danger-filled than others, but for the most part, the only thing you have to worry about are finding more small objects so you can grow and eat bigger things.

Casual and extremely entertaining, Tasty Planet: Back for Seconds is filled with a lot of straight-up fun. It doesn't have to rely on crazy gimmicks when it stars a time-traveling piece of gray goo that can eat anything it comes in contact with!

Finally a sequel! I wasn't expecting such a great thing!

Katamari Damacy! I immediately thought of that!
Broke, so I'm only playing the demo, but I like the 2-D aspect. Jumping in KD was so dang harrrrrrddd!

This game is WAY better than the first game Mostly because of the zoom out. I did not encounter a timer, but the demo only goes up to Egyptian Level 1. I love how the game is so accurate, like not calling Brontosauruses Brontosauruses, and making the Egyptains smaller than normal people. I hope I can buy this eventually...

Alright, it's finally out! I'm totally buying it with the sale that's available, I love games like this! (Katamari being one of them.)

Wow... This is really cool... I want to say that if anything has come close to hitting the "Object gets larger" game on the head since Katamari, this would be it. I played through two of the worlds and the only criticism I have is that it needs more variety. Far too often I felt like I had to clear the board of a certain item before I could advance, and often it was the ONLY item of a worthwhile size of eating. I really enjoyed it for a bit, but I got bored about halfway through the dinosaur era because I felt like there was nothing new for me to pick up, or more importantly nothing new to look at. I feel I would not have gotten as tired of this game if there had been just a few more items at each size level that you could pick up.

That said, everything else is fantastic! A quirky, silly soundtrack, very good visuals and sounds, and smooth controls.

Oh, one last thing: This game is HARD to play without a trackball. If you have a regular mouse it's a very "pick up, slide, pick up, slide" game. I highly recommend you get a trackball to play this, it is truly the best control.

No, it doesn't go up that far. The demo ends when you've played for 30 minutes. If you were in the middle of a level at 30 minutes, you can still finish the level.

Oh, didn't know. It's just in the original, it was a normal timer in which the game completely ended after an hour.

Yeah, I decided to buy Back for Seconds instead of Tasty Planet 1 (because I liked it a whole lot better) after playing both demos.

I enjoyed being able to gobble up dinosaurs.

Sometimes the cats will have names. They include:

Does anyone have a list of the edible objects?

My gallery is missing somewhere between 5 and 10 items.

I got the game, but I am HORRIBLY stuck on the lions and fish level. I can never seem to eat enough fish. The lions make me feel rushed and I just fly all over the right half, and my record size there is about 140cm, which isn't enough, apparently.

Does anyone have any tips (hopefully specific to this level) that could help?

Okay, just finished the casual portion of the game. I haven't unlocked the bonus sections yet. I found it entertaining over all though $20 seems a bit steep for a game that's essentially the same game presented on different scales. While there is some creativity, I feel like the makers really missed out on an opportunity to make this game from ho-hum entertaining to a game that has great replay value. For instance, you could get special rewards for increasing your size by eating only one type of thing, or one color, that sort of thing--a series of challenges to beat, if you will. Maybe this is in the bonus portions?

Kenshiro, regarding the lions... the way I did it was to shoot up to the top of the screen and eat the fish there first. Over all, even if the lions hit you a little, if you can keep eating fish I think you come out on top. So don't be afraid of getting hurt once in a while, just focus on keeping ahead of those lions and eating the fish before they do.

Forgot I asked for help here. I got the update the website's forum mentioned and the lion level was cake. The ballista level after that was weird.

The soldiers destroyed the ballistas but I was still able to win...

I think the ballistas are needed to beat the timed level. On casual you can eat enough soldiers to pass easily.