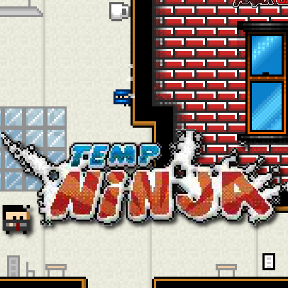 He jumps! He climbs walls! He... makes copies? In Games Northwest's high difficulty platformer, Temp Ninja, you control the daring and acrobatic office worker whose only goal is to attain the elusive report through each of the 20 levels. Move around using [WASD] or [arrow] keys, with [spacebar] as an alternate jump command. Sprinkled through the levels are gravity defying coffee cups which help unlock other characters you can play.

Along with the 8-bit music and graphics, between each set of levels you'll get to watch a fun cutscene à la Ninja Gaiden. Temp Ninja offers a meaty, nostalgic distraction from whatever work you should be doing. And while deaths are to be had, the short length of the levels helps deter you from rage quitting. This is an experience worth going through, after all, how often do you get to spend time in an office with the threat of spikes around every corner?

I can't speak for anyone else, but selecting Gem (the last character unlocked by coffee cups) on any of the difficulties seems to crash the game for me. White screen, can't do anything. I'm using Chrome on Windows 7, 64 bit.

Using the kitty works great on the medium difficulty levels, but I'm a big fan of the fact that every character but the default (except for possibly Gem, but I can't play as him) increases the difficulty of the hard levels, in an already-hard game.