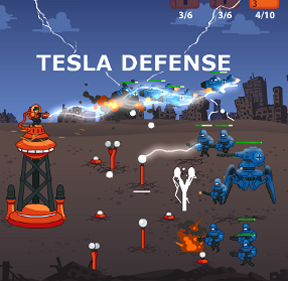 Did you know inventor Nikola Tesla claimed to have invented a particle gun? A device so powerful that it could put an end to modern warfare. Now you're wondering what the world might be like if Tesla had actually invented his teleforce gun, aren't you? NSBrotherhood and Michael Gribbin have envisioned that world in Tesla Defense, a lighting blasting, ray gun shooting defense game. Hold back the air and ground forces to protect Tesla on top of his tower!

Use your mouse or keyboard [1-4] to select your tower or ability at the top of the screen. There are ground and air towers, mines, and a powerful orbital strike. You have 30 seconds at the beginning of each wave to place as many towers as you can, after which the wave begins. If you wait to build until after the wave has started, there is a cool down period after you place each tower. As the enemy approaches, they will destroy your towers, so you will have to replace them eventually. However it is in your best interest to get as many out there as you can without having to wait. You earn money after each wave which you use to upgrade Tesla and the number and power of the towers themselves. Aside from placing towers and mines, you get to control Tesla standing tall on the orange tower. Use the mouse to aim and click to fire your gun. You have a limited amount of energy to shoot with that slowly regenerates after use. Use it to help with the toughest attackers, or on a group of weaker ones. While Tesla Defense isn't heavy on strategy, it is immensely fun to zap things with a ray gun. You'll be wishing Tesla had mass produced those things by the time you're done.

The game is functioning properly. What browser, OS, and Flash Player versions are you using?

Fun, but way too easy, I only lost a couple of towers in a handful of waves and never went below 75% health. Would have been fun to have more tower options also.