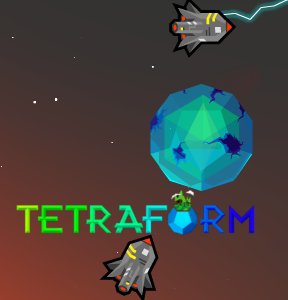 A single crystalline planetoid floats in the depths of space. It is surrounded by malevolent forces, twisted creations of metal ready to unleash electric death on the beleaguered people of that tiny world, and the only thing that can stop them is the power of rubber-bands and gravity.

Tetraform, the new game from Tyler Glaiel and Greg Wohlwend, casts you in the role of planetary defender, and combines space combat, yo-yo physics, and elements of the Grow games to do it. In the center of your screen is your pretty polyhedral world. Waves of enemies come in from the sides of the screen, all prepared to crash into your fragile little planet. The only way to stop them is to click on two of them, causing them to become irresistibly attracted to one another, resulting in their eventual spectacular collision. These collisions net you points and also rain resources down on your little planet.

As the game progresses, you'll deal with larger and smaller ships, each of which have their own specific gravity or abilities, including being able to shoot missiles or phase into two identical copies, only one of which is real. You'll also learn to turn enemies' weapons against them, and snare multiple enemies into collisions that cause larger explosions and net more points. Sometimes when waves end, you'll have a chance to pick up health power-ups, as well as procure some power-ups that appear as structural additions to your planet, but be careful, as waves will start quickly one after another, so be speedy about getting your goodies. 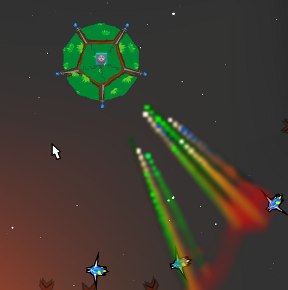 Analysis: Tetraform's biggest asset is definitely its clever gameplay. The attraction/gravity mechanic, while reminiscent of a couple of other games, feels exciting and well thought-out, and having to plan which ships to crash into one another manages to be both strategically satisfying and explosively fun. The game suffers, however, from the lack of a tutorial, as there are mechanics and ideas that don't seem well explained. What, for example, are the plates of dirt and grass that appear on your planet? The game is called Tetraform, which seems to indicate that terraforming the planet is some kind of goal, but it's never clear how you're supposed to reach it, or whether making grass grow on your planet is part of that goal.

That being said, the rest of the game is really smoothly executed. A variety of enemy types force you to constantly reconsider your strategy, and while the difficulty of the first couple of waves is pretty reasonable, the game quickly gets hectic when smaller crafts zip around your planet like water circling a drain. Learning how to send larger ships careening into swathes of smaller ships is one of the great moments of the game, and even figuring out how to use your power-ups can be fun, if a little baffling. The thing that originally looked like some kind of sun/solar power collector turned out to be a morning-star to run ships into, and you can click twice on the radioactive scaffolding to destroy everything on screen, which is crucial when things start getting really frantic.

If anything, the difficulty ramps a little too fast, but fortunately you can always simply continue the game any time you die (though your score gets reset,) so you'll even be able to pass the (long, fun) boss-fight with a little bit of patience.

In general, this is an exciting game with an inventive and well-executed mechanic. The simplicity of the gameplay means that the lack of tutorial isn't too much of a problem, and the music is really catchy. Take it out for a spin!

well for me anyway

mostly because of the graphics, but i do like the way they did the planet system thing

awsome game!
I love the graphics, the gameplay is neat, and gotta love those nukes!(i only got 2 but still)
i caught onto the gameplay fairly fast, "rubber band effect" indeed.
I think that if you get everything and get hit only a few times, the planet's suppposed to look like something

I love the idea behind this game but the implementation really sucks. There are almost no instructions which makes the game have a lot of guesswork. One boss flew around randomly and took out all of my spikes without damaging itself. And the last boss is massively overpowered, making it completely impossible to beat. Random teleportation plus it drops a ton of missile generating mines. I died on the moss, restarted, and literally died 3 seconds from the restart due the overwhelming number of missiles it generates.

This game's medals are garbage too. Get a chain of 10+ is worth a measly 25 points? Have a traction beam active for 15 seconds is worth just 5? what retard made these up? They are ridiculously impossible to get and they give you crap points.

Nice game. I gave it a 5. I only wish it played faster.

The lack of tutorial was frustrating, but it was exciting to (accidentally) discover that a leftover enemy could be combined with a powerup at the end of level to create a planetary protector.

nice game made it all the way to the final boss with a laptop mouse pad, music got a little annoying.

I thought this was a novel idea for a game. I also think that having a Wacom pen tablet makes it much easier to point and click on objects. :)

Pretty fun, beat it on my first try. Nice diversion for an afternoon.

Managed to begin development of an atmosphere which was what kept me interested.
Good game :)

I hated this game and I stopped playing it after just a few minutes. Specifically, I hate how you have this tiny window and you are spending most of your time scrolling around just trying to get a look at things. It makes the game annoying and disorienting and serves no real purpose.

@menschenjaeger I found this by accident, push "p" then go to hints/tips

My trackpad was kind of annoying here, I must say. However, this game has one MAJOR fault that means I will probably play it only rarely. This fault isn't much of a spoiler:

If you just let the game run by itself or die, your planet shrinks to nothing (once I thought it was a huge bonus), and you may continue, resetting your score. If you continue, though, it blows up, killing all the enemies. This was how I beat the final boss! It also was annoying on the third boss when I blew up right after he died and got NO RESOURCES! Oh well.

I give this game a 7 out of 10. I hope I formatted the spoiler correctly!

I found this game very nice, and enjoyed seeing how life and an atmosphere formed progressively on my planet. It felt more and more as I was protecting something. As for the final boss (and for most bosses),

just have it collide with the stuff (time bombs, missiles) it drops; with some patience it will go down.

The tiny window isn't from Newgrounds, it's a result of how JiG links. You CAN resize it, actually (but you can't use back, forward, or other buttons). If you don't want a "crippled" browser window, use the link at the top of the article, when the name of the game is first mentioned.

This has the best soundtrack for a casual game ever. Loved the music. Really enjoyed the game too, until about level 13 when I just started getting twitchy. Might go back and try some more tonight.

I'm surprised that some people didn't like this game! It was nice ,relaxing and fun!
I hope they make a sequel! but since a major complaint was there being no tutorial, maybe the creators can include one in the 2nd one? Maybe make it more fast paced too.
As for the Final Boss, I personally thought he was a pushover! So I'm even more surprised a lot found him hard.

How does the planet look after it grows bigger? (I've never got past the blur stage)

I wouldn't say that the game is easy, but I had no horrible problems on my second play-through (my first was interrupted as real life came in the way).

I got a nice, thick atmosphere and a ton of cloud cover :D Final boss was annoying, but fast clicking and comboing works. Click one of his bombs, and the rest will latch onto him as well.

Pretty good game overall. It sucked on the final boss; I had him almost defeated, but then he crashed into my spike tower, and I didn't get any gasy stuff, or points. I really wanted to know what it would have looked like as a complete planet

I was wondering what it'd look like with the maximum health possible (though I did have a lot at one point).

Beat it on my first playthrough, no continues necessary. It's always a good idea to have a nuke handy.