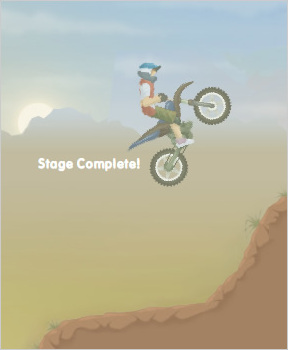 Wow. How could I have missed this? Suggested by Marijn and John-Paul a couple of weeks ago, I can't believe I let this one slip under the radar as I am a huge fan of David Thorburn's prolific game development efforts on his Teagames website.

TG Motocross 2 is the sequel to another fine game of the same name, TG Motocross, which we haven't covered before. Both games actually appear to be quite the same except for different courses. This is not such a bad thing, however, as both are excellent games in the motocross genre.

A light area in the upper right corner of the game window shows a map of the terrain for the level to give an idea of what's coming up so you can be ready to jump that chasm or land safely on the rocky and uneven slope. Race against the clock and try to get one of the top times, or just have fun trying to make it through each of the 11 courses. Great casual fun with an added incentive for the hardcore gamer.

Analysis: The physics engine here is very much the same as we're used to seeing in David's work, and yet the implementation seems to be a bit different in terms of bike and rider. Whereas previous games had the rider attached to the bike, the TG Motocross games separate the two so it becomes entirely possible to actually fall off. While I am not certain if this is important to the gameplay at all, I did notice that the physics in this iteration of the engine seem a bit more polished and produces a greater sense of immersion and enjoyment than previous efforts.

In comparison to Teagames' BMX series of games, I enjoyed TG Motocross much more. This is most likely due to the fact that the bike is motorized and that makes climbing steep inclines less of a problem and improves the relative level of enjoyment for the casual gamer.

Try it yourself and add your feedback to the comments.

How do you play the last 3 levels? They seem hidden

This game rocks, your site too Jay! Congratulations!!

I love this game. About once a day I open it up, and play it without putting much thought in it. It's the perfect distraction. I do wish it facilitated more freestyle play though, the ability to turn around like some of the BMX games and maybe non-timed levels. After a while seeing how many flips I can do off X jump gets boring. Then again it's not supposed to be an every day game :P

Unfortunately, since playing it I haven't been able to go back to the BMX games, as the rigidness of the bike and bouncing drives me up the wall after two of these nice motocross games.

This really is a lot more fun than I thought it would be. Doing flips (correctly) is the most rewarding part of the game for me :)

Great game, but I found that leaning back (but not too much) instead of forward makes you go faster, and leaning forward on steep inclines seem to let you climb much more effectively.

Oh, and the positions the rider can fall in make me cringe >_

Oh Yeah! Totally loving this game. It is the epitome of a "Casual Game". I actually found it in desparation a couple of weeks ago when this site (which is usually my haven) was posting the same games already reviewed from the competition.

Don't get me wrong, good games, but THIS is the best of TeaGames! It just keeps getting better!

O Teagames...with the addictive game play, yet very frustrating physics...very frustrating games on this site...but yet I find my self strangly drawn to them to play them for hours upon hours of frustration and stress...gotta love that...

I also wonder how you can play to the last hidden three levels after finishing all the "normal" levels.

You're right, I have not mastered this game. I am just good enough to have fun with it, though. Sorry if my description was misleading. Maybe I'll remove that from the review so future players are not confused (nor injured.)

I can't play it, it seems it can never finish loading, the screen stays in "please wait", while it loads the level, but that's it. As a matter of fact, I can't seem to play anyother game from teagames, and I love that site, how can I fix the problem? Please help!

I think the best way to keep the bike moving fastest is keep the rear wheel on the ground as much as possible... that means slow down at the top of steeps so you don't fly up in the air... also, the steeps, if you lean too far forward (constantly) all the time, you end up loosing traction because your rear (driving) wheel looses traction..

Any other hints/cheats to trim of 11seconds off the time? ;-) I'm hooked.

Well I've been trying to better that time too and the best I can come up with is roughly 1:52, I cannot shave off 10 seconds off that time, so what's up? I'd like to see a vid of a trial of 1:45 or less to see what you guys do that's different from me cause I'd love to know what's up. If no vid any tips on where you get all your time?

The first level I can only get it done in 13 seconds I cannot break that 12 second mark and I really have no clue how it's done. I approach the first hill full speed pulling back, jump high, slow down for the next two enough to be able to keep my tire close to the ground and so I don't overshoot the ramp comming before the hill which I also take slow enough so I can land at the bottom of the incline so as not to stop my momentum, then I go up the hill, jump a little at the top, not too much cause I don't want to be in the air too long and keep going, cross the gap, go down intot he small chasm and up the large hill. I always get up there at around 13,50 with my best being around 13:28, no way I can get it to 12 seconds any ideas?

to shave off the extra second on the first level to get you down to 12:85 seconds on most cases...all you have to do is when the game starts let the rider roll down the first hill without touching anything that way you moved a bit and saved a second...then drive fast trying to land in a way that doesnt cause a "thud" but more of a smooth transition into the next jump...not that hard. im willing to make a screen video but the sizes tend to be pretty big. if u have any ideo how to make screen videos with sizes not in the 500mb range let me know and ill make a video.

i usually finsih around 1:45 plus or minus a few seconds depending on the jumps i do and my overall mood

the best thing to do to get better times is

Absolutely love the game. It's more and more addictive the more you play on it. The last four levels (the greyed out ones), are yet to be created by the designer. Looking forward to them already.

On the first the first game (TG motocross 1), the first lvl i got 00.12.75 seconds. the whole trick is to play it smooth. Make sure you dont overshoot the first jump, so you can gain speed to clear the next. And always keep your wheels on the ground as long as you can.

i just got 1.39 it wasnt easey but i did and no body can beat it hahaha

Guys,
has anyone completed the game without falling off at all?
i have a theory that this would unlock the last three but i haven't tested it. I inevitably die on the second last yellow level.

i completed the game in about a 1.49 without falling off once, and no it didn't unlock jack... oh well this guy has a tendency to add more to the games as they get older so maybe they are just future tracks that will be added.

if you hit shift the rider will fall off the bike

Will there be a TGMotorcross 3???

hey do you guys know a browser that i can use to make TG motocross2 run faster. Please respond

yeah tgmotorcross does run fast...let me know if i can dl anything that makes it faster

my best score is 1:41 or so, im just inside the top 50. its a fun game.
I've tried everything to get those last levels. even finishing with all the lives I thought would work but no...i even tried going down all the holes but no. and also climbing the walls at the ends doesn't work.

I made a music video with this game back when I used to play it on a slow computer, its on my site: www.myspace.com/annieyoulookscared.
if anyone knows how to unlock those darn levels PLEASE do tell me.

It just has him hovering in the air at the begining, not moving. :( I can't play.

I remember playing this back then.. but for some reason my arrow keys have no effect now.