Finding yourself drawn to an odd crater in the top of a mountain you feel as if a grand adventure awaits you filled with treasure and other worldly goodies. Instead, you find yourself very far away from anything that could be considered from this world and are trapped. While there are hidden items and puzzles to be solved this point-and-click game is also filled with horrors that will make your skin crawl. That's because the master of horror escapes, Psionic, is back with their new tale, The Abrerration Inside, that has more of a Lovecraftian feel to it as there are little jump scares and much more unnerving atmospheres. You start off with some very important items for your adventure and they can be accessed by the double arrows in the top right of the screen. These items will help you get around, discover hidden secrets, and will save your life, but only if you're fast enough. Clicking on the left or right side of the screen will allow you to explore the 3d environment and you can always move forward when your cursors changes. But be careful, because when you move as there are plenty of traps and beasts wanting to rend your flesh. 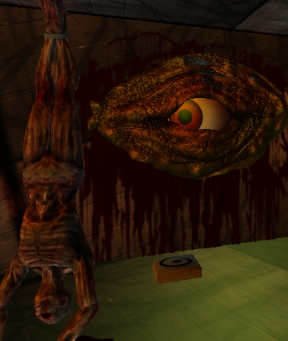 Yes, timing is very important in this game. Your lock picking skills and some puzzles rely on clicking at the right time and even when moving around a hallway with moving spikes you'll need to watch when and where you're stepping. Getting stuck by the spikes won't kill you, but will lower your score. You can gain back points by finding the hidden collectibles and moving as fast as possible as there is a clock counting how long it takes you to win. But one collectible isn't about points. Instead, it unlocks a different ending. You have to play the game at least twice to achieve this though. There are two different pathways to take and both will lead you to very different areas, but you can't go back between the two so be prepared to hit replay if you want to get the full story and an ending you'll be more happy with. While there are a few jumpscares the real horror of this game lies within the story you collect from the notes and getting the few other living people around and the ever looming atmosphere that is heavy with doom and gloom. Even the sound effects leave you unsettled so I recommend finding a dark corner to play in with a set of good quality headphones to really appreciate Psionic's tale of horror.

Play The Aberration Inside

I was annoyed by the rocks not being obviously interactable even though one of the notes do tell you to break them because it's a sign of likely future lack of respect for keeping it plain what you can or can't do anything with, but when I have to restart the game from scratch because I had the gall to refresh before actually getting all the discs into the crater monoliths it really kills my faith that the game won't be broken elsewhere and makes me want to watch the walkthrough instead.

Actually the rocks are interactable but you have to use an item on them and not just your mouse. Sorry I meant to make that more clear in my review but I guess I let it slip.

I'm sorry your game didn't save right, but I'm not sure why. I did restart the game as well before I finished putting in all the disks and the ones I put in were still there.

Yeah, I don't know if it's because I was using Chrome, refreshed with and without uBlock Origin, or what. Also having seen more than the crater now from the walkthrough rekindled my interest so I'll give the game a bit more of a chance, it's just there are a lot of bad games that commit these sins so I get hives when I see them reflexively.

I figured out what went wrong. The walkthrough makes it look like you can just put all the key discs in and automatically get teleported, but you actually have to press the snake tablet after doing that. Or you can press it before and somehow I managed not to do that, but I'm pretty sure I did and it wouldn't make sense to have it that way anyway.

I've been searching for an hour for

Am I alone in this place?

Where did you find the others?

In the room with the spikes, look closely at the odd triangles.

That's the one I found that was easy to miss.

I remember finding one near the tentacled monster and another in the room with the bodies. It is possible I found the third one in one of the corridors, but I'm not sure.

looking for the 9th plate and am having no luck. Anyone else have luck in finding them all?

Did you find the one

in the area where you meet the first person, where the fork in the road with the two pathways is.

That one stumped me.

I really liked the 3D environment here, and I'd like for more games to do something similar. Some of the monster and area designs were very nice, too, and the lockbreaking mechanism was somewhat satisfying. I enjoyed stabbing the giant eyes. That's... everything positive that can be said about this game.

As for the rest:

1) There was very little in the way of puzzles. Collecting is fine, but it's not a puzzle. Puzzles involve doing something challenging or interpreting hints to come up with a solution.

3) People sure have a variety of opinions on whether euthanasia is morally acceptable. However, nearly everyone can agree that it's not exciting, or fun. When I go, "okay, I don't think there's any hope for this person within the story this game is trying to tell, and he's asking me to kill him, and maybe I'll get some collectables for honoring his request" the last thing I'm expecting is an obnoxious bright orange "YOU KILLED THE POOR SUFFERING WRETCH!!!" Am I... being told I did something wrong? Am I being told I did something cool? How is it an accomplishment to kill a character who wants to be killed, who's not in any way making it difficult for me to kill him, and who couldn't even make it difficult for me to kill him if he tried? Who is going to be excited about this? Are you assuming that KNIFE BLOOD CORPSE DEATH will set off some sort of instinctive sense of gaming accomplishment, no matter the context? If you want entertaining violence, then create a situation where the violence will feel entertaining. There could've been more eyes to stab. We could've got an exciting message about those.

the last piece is in

the pit after you jump in near the bottom

in the pentagram room (right path ) where can you find the four eye puzzle clue?