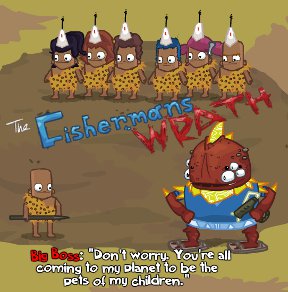 If you've ever considered that walking around dressed like a tree, or fish or bear or stoneman, and talking in a computer-simulated voice is one of your life's aspirations, well here's your chance. Your fancy-dress fantasies can be finally fulfilled in The Fisherman's Wrath, an unusual kind of adventure game by Enalpria Entertainment. It's tricky trying to define what kind of game this is because it involves a little bit of battle, a little bit of avoidance, quite a bit of exploration and a lot of dressing up... in awesome disguises.

You are the protagonist, a fisherman designated with the difficult task of saving your tribe's children from some laser wielding aliens. To do this you need to acquire items for your disguises and use said disguises to capture emeralds for a face-off with the Big Boss alien to save the children. Use the [WASD] or [arrow] keys to move, the [Z] and [X] keys for using your spear and the [C] key for other actions such as interacting with your fellow tribes-people, collecting items and swimming.

The Fisherman's Wrath is not exactly challenging; there's plenty of in-game instruction and help. The most difficult aspects of the game involve fishing and avoiding the local jar salesman. And what can be said about the final Boss Battle? We-ell, it's a little underwhelming. But the prize at the end, if you choose to seek it out, is kinda worth the effort and certainly doesn't detract from the adventuring and good fun that this game provides. So if you're up for something unique and out of the square, try The Fisherman's Wrath on for size.

This was a very easy game, but I actually enjoyed the disguise maker more than the rest of the game. You can turn into a giant squid if you want to.
It is too bad that people don't respond to your disguises.

Yaaaaay! I did it!!!
I thought this game was really cute, though pretty easy. I liked playing with the dress-up part too.

I wish I knew what was going on at the rock city. Am I their long-lost son???? AM I???
And killing the boss was pretty easy. Why was he calling me a 'baboona' the whole time?

A few things that would have improved the game:
-more severe punishments for running out of air deep in the water.
-more ways to interact with people.
-harder boss.

Also, I couldn't get the game to load on this site. I had to go to the creator's site.

This game was so stupidly easy.

Am I terminally confused? I can't exit the disguise screen, I can't get my character to stop moving, I basically can't do anything.

leaves wouldn't show up on the disguise maker, and neither would the skull and rib cage I picked up in the fish. So I can't dress up as a skeleton or complete the game.

I liked the game, but the fact that the coding prevents me from finishing it is really frustrating.