A house, in a field, looking about as haunted as haunted can get. Why not step up and take a closer look? The Haunt is a mobile point and click puzzle game from Furious Apps that plays (and looks) like a casual adventure/hidden object game you might download to your desktop computer. Instead of a mouse and keyboard, though, you get to investigate a haunted house with your own two hands, finding items, managing your inventory, and solving mini-games while a paranormal presence follows you from room to room. 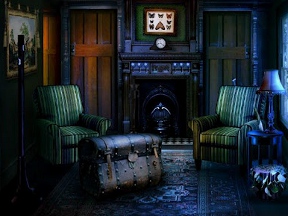 Soon after beginning the adventure, you find a note from Mayor Riddendorf thanking you for accepting the town's request to rid the area of strange spirits. Apparently many have tried to dispel the dark forces, but none have succeeded. And you're next on the list! No reason to think you'll fail as well, right? Positive thinking and all that? Either way, this is your goal, and you'll accomplish everything by using the touch screen. Inspect objects, collect items, move throughout the map and open your inventory with a simple tap.

Inside the house you'll run across plenty of strange things, and we're not just talking about the decor (which really is odd, once you look at it). Puzzles are all over the place, taking the form of mini-games, inventory riddles, and so on. Inspect everything and explore every room to find the items you'll need to proceed. You'll also find a healthy share of clues you'll need to remember for later use. Also a part of the game are finding bonus items like puzzle pieces, coins and moths, the latter of which serves as hints for those inevitable moments when you get stuck. 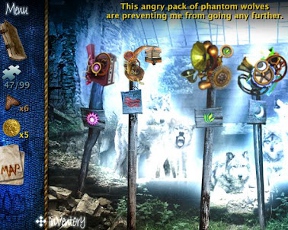 Analysis: The mobile market has so far been home to mostly puzzle games and quick reflex-based time wasters. To see a game as attractive and content-rich as The Haunt is a rare thing! It has all the qualities of a beefy PC/Mac download squeezed into a portable package, and since it was built from the ground up for the touch screen, you won't find any awkward control conversions or objects too tiny for your finger to point out.

The Haunt ditches a lot of more modern control methods in favor of the straightforward, infallible tap. There's no need to wonder about rotating inventory items to look at the reverse, no cause to shake your device around, swipe weird parts of the screen, or try barking into the microphone (don't judge me!). While a part of you will be disappointed The Haunt doesn't utilize the cutting edge of point and click interaction, another, much larger part (possibly the liver, since it's so big) reminds you none of that matters. The Haunt plays perfectly and never turns the interface into a puzzle, leaving you alone in the haunted house with riddles to solve.

Can't get enough of The Haunt? Try The Haunt 2!

Big adventure in a small package, The Haunt is worth several hours of solid puzzle solving entertainment. There's also plenty of secret items to find, which should satisfy the hidden object fan we sometimes don't like to admit we're harboring. You might even get a good spook or two while you're at it!

Thanks to Trinn for the walkthrough!

Thanks to Trinn for the walkthrough!

Ok so far your help has been great. But I am having a issue, in the pit where you need to scare off the daemon using the cross, I tried to do it 3 Times and fail at them all. Now to make matters worse I no longer have the cross in my inventory and I can't find nor get to the hatch that I need to open cuz he keeps coming back and throwing me places. Help please........

What do you do with the gold crucifix?