The Last Ninja From Another Planet 2

When we last left our hero, the sole remaining practitioner of ninjitsu on a distant world, he had just finished annihilating an army of mutants in a mad scientist's lab in order to prevent them from overtaking the galaxy. Now all he wants to do is go home and kick up his footie pajamas for a while and unwind. But a ninja's work is never done, and in The Last Ninja From Another Planet 2, Dharmasta Adriwara Widhayaka's interstellar ninja finds himself in the depths of another puzzle adventure. This time, he's made a pit stop on his way to his home planet, in order to liberate another innocent world from the grasp of the mafia. (Seriously, ninjas vs. mafia. Why haven't MORE people jumped on this train?) Just like in his previous adventure, this anti-gravity assassin leaps from wall to wall with the [arrow] keys, moving straight forward until he hits something, much like in a sliding block game. He's out to exterminate every mafia goon he can, and while the minor minions provide no resistance to his blade, not all the mobsters will go down without a fight! It's a familiar formula for those who played the first game, but it's got plenty of new enemies, skills, and hazards to tempt them back for a second round. 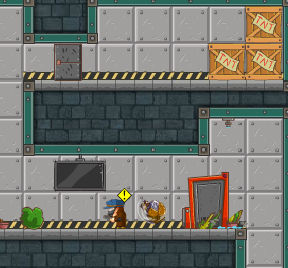 As a sequel, The Last Ninja From Another Planet 2 is more of a small step than a giant leap. The central gameplay is still the same, and all of the fundamentals from the original are here, such as scarecrows you can turn into ninja clones, technique scrolls that grant you new abilities, and of course, dangerous spikes. The biggest mechanical change the game offers is its new "Alert" system. Enemies will become aware of your presence as you draw near, and will change their movement and behavior based on whether or not they see you. You'll have to be quick and stealthy to take some bad guys down. In fact, there's an ever-so-slight trend in this game towards the action-oriented... in addition to the more thoughtful enemies, obstacles such as flickering laser beams and moving sawblades will test your timing and reflexes as well as your brainpower. The puzzles themselves do feel easier than they were in the fiendish original, but that's partially due to how much slicker and more tightly designed they are. You don't have to worry as much about when to activate clones and there are fewer places you can get outright stuck. The enemy placement is still top-notch and will make you carefully consider your movements, but you don't have to be anywhere near as exacting as you did in the first game. This means that, as a game, The Last Ninja From Another Planet 2 provides a smoother, more forgiving, and more relaxing experience with far fewer frustrations. Although it doesn't have many true innovations, the polished-up gameplay means this is still an excellent experience for fans of the original. And if you didn't leap with the ninja the first time around, this is a darn good place to start.

Play The Last Ninja From Another Planet 2