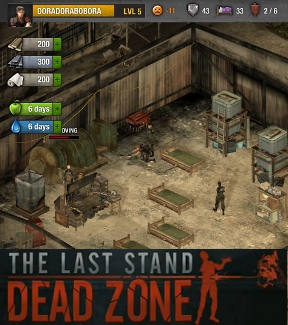 So who were you before the world ended? Fry cook... preschool teacher... dashing gaming journalist with fabulous, flowing curly locks? Well, none of that matters anymore, since zombies don't really care about your yearly income or hair care products. Who you were doesn't matter so much as what you are now... a survivor, and, potentially, a leader and hero. In Con Artist Games' real time action-adventure simulation The Last Stand - Dead Zone, you're scrounging out an existence in the remains of Union City.

Dead Zone is a little bit of everything, except Christopher Walken, unfortunately. You're in charge of a struggling compound that might not look like much now, but could become a bustling hive of humanity if you can scavenge supplies and defend it both from the undead horde and greedy raiders, in addition to attracting more survivors. Food, water, and other supplies like weapons and building materials can be gathered by sending your survivors off on missions, which you can choose to play yourself, or have automated. Since everything takes place in real time, you might have to wait a whole for your crew to return if you sent them far away, so think twice about who stays behind. Certain classes are better at healing, fighting, or finding things quickly, so pay attention to who might make a better meat shield and who is better suited to rooting through piles of rotten food and rusty nails. 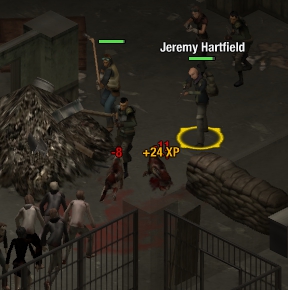 While in your compound, gameplay mostly consists of a top-down style management simulation, directing your crew to tasks like clearing rubble or harvesting supplies from gardens or water collectors. From here, you can manage equipment, upgrade structures, and build everything from objects of comfort like beds and showers, to important security features like walls and blockades... as long as you have the supplies. If you want to venture outside, hit up the city map for a look at nearby structures and what you can scavenge from them, choosing a team and sending them out. If you choose to play the mission yourself rather than automate it, you'll have to manually direct your teammates to task. They'll attack anything that comes in range, but you'll need to move them around the map and tell them what to scavenge. Need to finish something more quickly, or just get a bit of extra help? Fuel is a special currency you can purchase through optional in-game microtransactions or potentially find freely on missions, and can be spent on everything from refilling supplies, to instantly accomplishing tasks, and more.

Analysis: Dead Zone is perhaps one of the best looking flash games around, but it's not just another pretty rotting face. The Farmville-esque approach to timing and progression won't appeal to everyone, but with considerably more depth to its structure and overall gameplay, Dead Zone manages to avoid the trap of feeling like it's pushing busywork on you. Tweaking the layout of your compound is surprisingly addictive, and you'll need to put some careful thought into your defenses to get the most out of your security. Watching your blockades successfully keep attackers at bay and seeing your compound gradually flourish into a site teeming with activity is immensely satisfying.

The downside? There's not quite enough to do just yet. The more you play, the more repetitive it feels, with an overall lack of variety to the missions and fetch quests that will eventually tempt you to automate all of them. You kind of wish for a bigger emphasis on story to entice you to keep playing, like in Union City, and if side-quests had more of an unfolding narrative over missions I might never have put it down. Of course, since the game is in Beta as of this writing, you can only expect more to come, and new locations and environments are already on the horizon. The Last Stand - Dead Zone still has a few kinks to be ironed out, but is already one of the most impressive free simulation games around. Though if you're like me and have difficulty keeping potted plants and sea monkeys alive for more than 48 hours, you might find this one a bit of a challenge.

The mechanic of active resource gathering is engaging, if only because the only way to reliably obtain resources is to go out and grab them yourself. Generating metal, cloth, or wood by yourself is only a stopgap measure at best. Generating food and water is good to keep your stores from dwindling, but not for letting it accumulating.

True to the setting, you'll never find yourself resource rich. Instead, you'll just never have enough. The nested prerequisite projects are costly, and it will take a while for you to build the storage capacity to hold enough resources to build.

However, the game is in beta, and so there are a number of things to take issue with:

-Certain statistics of items and characters are opaque (what is Enemy Suppression and how is it more relevant than Knockback?)
-The isometric view and the function of fading walls when characters are behind them makes it difficult to determine which characters have line of sight to which enemies, although hopefully, someone will take care of each enemy soon enough.
-Although you have two angles from which you can view the isometric grid at home and in the field, there is one wall of the grid that will never face you, so building and interacting with objects behind that wall can be difficult.
-Single unit movement in the field is generally fine for the small number of units you'll command on any one mission. But if you intend to send units to opposite sides of a map to "divide and conquer" (since five minutes can be a prohibitively small time limit), zipping back and forth to micromanage can be difficult because of how clunky movement/targeting can be.

The game's premium currency is unobtrusive and optional. The only thing I found prohibitive about the premium currency is that you must use it to perform any crafting or upgrading (which otherwise seems like it could have been one of the deepest parts of the gameplay). But even then, you find single units of fuel as you go on salvage or clear out piles of junk in your base.
You can use it to speed up or instantly complete tasks, although it can be very expensive to do so. You can use it to purchase any resource type, even tiny little crafting components, but generally resources can be found in the wild (or as recycled components of junk from the wild) if you do a couple of salvage missions. You can spend exorbitant amounts of fuel on recruiting new survivors (why would survivors be swayed by fuel over food and water?), but meeting the natural requirements for recruitment is good and provides a good motivation for progressing through the game.

Despite any problems the game may have right now, they are at most superficial. The core game is sound and has a lot to offer. I must agree with Dora that you do end up wishing that narrative was featured more than only in the loading screen (and even then not in a linear matter). Con Artist Games have put a great deal of effort into building the universe of The Last Stand, and even the effort that went into the scenario of the Dead Zone (again, only visible in the loading screen) is on par with their excellent history of narrative work. But despite that, the gameplay has the potential to hold you for much longer than other cut and paste resource management games.

Will there be another write-up of this entry if/when more sorts of missions are added?

Hi ChaoSpectre! First, thanks for your very well thought out comment... stuff like that is always a pleasure to read, and I urge you to consider sending your feedback along to the developer, since every developer loves getting well thought-out comments like that.

As to your question, it's unlikely that I'd do an entire other article for this, but I will certainly add a mention of it in a Link Dump Friday article when more missions are added, along with my thoughts on that content, and tack that on to this original review. :)

I have since posted concerns on the Get Satisfaction page for the game. (Get Satisfaction doesn't lend itself toward long form broad-range comments. But it does make it relatively easy for Con Artist Games reps to zone in on the more pressing concerns of the community.) I was actually hoping to start any sort of discussion of this game here, since the comments page was empty and stayed that way until it got bumped off the front page.