The Serpent of Isis:
Your Journey Continues

Oh, that Isis. She's quite a charmer, even with the whole "annually flooding the Nile river because my husband died boo hoo" thing. She's also apparently very fond of having her artifacts scattered throughout picturesque European cities. In 2009, the first Serpent of Isis game had hidden object fans jetsetting Prague and London in a quest to recover the titular thingummy and fulfill the dream of the hero Robert's dead grandfather. It was an excellent game that soon had people clamoring for a sequel, and now your journey can finally continue in, well, The Serpent of Isis: Your Journey Continues. Gamgo Games have made the new game in much the same mold as the first, with the hidden object scenes being the main attraction and the adventure and puzzle elements only there for a little variety. Enjoy beautiful scenes set in Paris, Venice and more as you search for the Tomb of Isis. Next game: the Vacation Home of Isis? 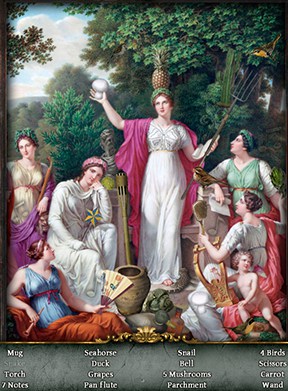 The Serpent of Isis 2 is welcoming to both hidden object pros and newbies, featuring casual mode where sparkles guide the eye to clickable spots and no timer breathes down your neck. It also features an excellent tutorial, which is skippable for those of you who know the hidden object drill already. The game does have a somewhat uncommon set-up for its inventory, however. It can be accessed by clicking on the suitcase in the lower right, or by clicking on the bar at the top. Some objects, generally clues, can be zoomed in on by clicking on the magnifying class on them inside the inventory. Objects are never combined within the inventory, only in the game world.

The hidden object finding is pretty straightforward for the genre: you're given a scene and a list of objects, and you must find all of them. Sometimes some of the objects are listed in blue rather than black. If that's the case, you must manipulate something within the scene, perhaps using an inventory item to do so, in order to uncover the item. You're rewarded with at least one inventory item for every successfully completed hidden object scene, and most frequently these are used in what gamers usually call "inventory puzzles", figuring out what object is needed to coax a cat out of a tree or whatever. The game also contains more straight-up puzzles in order to open locks, piece together torn papers, and manipulate mysterious devices. The puzzles are a nice blend of old standbys like the photograph jigsaw and more challenging ones that require careful consideration of the clues.

Analysis: Hidden object games are a pretty hokey genre. The Serpent of Isis 2 lives and breathes all kinds of hokeyness: melodrama, multiple exclamation points, obsessive collection of useless objects after the useful object has been found. Love it or hate it, that's the game! Personally, I have to love it. It doesn't do anything by halves. Every character has that "my IQ has suddenly plummeted in reaction to this shocking news!" face as an option, and it's pulled out of the avatar repertoire whenever anything even a tiny bit exciting has happened. By the end of the game, I'm pretty sure Robert's face has frozen that way. It's too bad his grandfather didn't leave a note warning him about that. The game is so hilariously sincere that it makes me want to cuddle it and give it a mug of warm milk and a cookie. 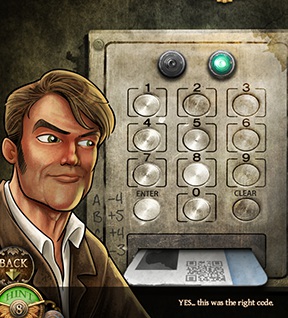 Luckily, the game is as serious about doing the hidden object gameplay well as it is in living up to the somewhat dubious reputation of hidden object plots. Only two or three times in the entire game did I run into the issue of unclear or ambiguous object names (for example, one scene called for a "mallet" and contained both a croquet mallet and a meat tenderizer; the game only accepted the latter). Objects and scenes are clearly drawn and well lit enough to be fair and eliminate the eyestrain problem that plagues many contemporary hidden object games, but still provide a challenge to even the veteran player. The puzzle and adventure game parts are quite limited, so be aware of that going in; the game assumes you're here for the hidden object scenes and that's how you'll spend the majority of your time. However, they are also very well done. It should be noted that while the hints are given generously, they are almost useless outside of the hidden object scenes. Several times, when I was stuck about where to go next or stymied by a puzzle, I tried a hint, only to be told to do something I'd already done, or something keyboard-face-smashingly-obvious and vague, like "I should look for a clue!"

As the most recent Babylon Sticks comic adeptly demonstrated, there is a supervillain stalking our game shelves, and his name is The Incredible Shrinking Gametime. The problem isn't quite as frustrating when you're paying Big Fish Games' reasonable rates instead of $60 for a console game, but a lot of players are fed up with games where by the time you've finished the demo, the game is more than half-over. Serpent of Isis 2 took me four hours to beat, and I would say that if you're the "run to the walkthrough or ask for help at the first sign of trouble" style gamer, it would still take you at least 3 hours, because no walkthrough in the world can rush you through the game's hidden object scenes; you actually have to depend on your own item finding skills there. This truly makes the game a solid "buy" recommendation for hidden object fans.

The screenshot displays the rose in the final position, and marks all the other pictures with their correct order.

This unlocks a hidden object scene, where you will find a wooden figurine. Screenshot.

Enter this into the control panel and click the button at the bottom. Screenshot.

Thanks so much for including the playtime, Joye!

I like the idea of finding hidden objects in classical paintings.

The screenshot displays the rose in the final position, and marks all the other pictures with their correct order.

This unlocks a hidden object scene, where you will find a wooden figurine. Screenshot.

Enter this into the control panel and click the button at the bottom. Screenshot.