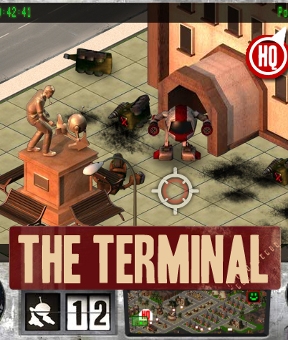 Welcome, employee! It's another wonderful day here at the labs. Here's your labcoat, your complimentary coffee mug (not to be removed from the premises), and your instructions for avoiding the daily fiery demise. See, it seems that B.O.B, the FailSafe Terminal A.I., has, um, gone a bit wonky, and our very own factory bots have now turned against our beloved HQ. At any other time, I would advise you to crawl under your desk, make peace with whatever deities you have, and call that person from high school and tell them how cute you thought they really were but never had the nerve to say. But this is not any other time! This is The Terminal, the new action/shooter/defense/explodey hybrid, and you're going to take reins and stamp out B.O.B's invading army or die trying! Don't worry, we're right behind you!... well, not, like, right behind you... it's dangerous out there! What do you expect me to do? I'm just management! It's not like I have any real skills!

Like all the best war machines, even a child could operate the mech you find yourself stomping around in. Move with the [WASD] or [arrow] keys, and aim and shoot with the mouse. You can see incoming enemies on the map at the bottom of the screen as little beige blips. Destroying enemies not only means cash that you can use to upgrade your mech at any time (just hit [P] or click the gears icon), it also occasionally nets you valuable powerups if you're lucky. And you'd better be quick and smart as well as lucky, since our beloved HQ makes just as tasty a target to your foes as you do; leave home base unprotected for long, and you could find yourself coming back to a smoking crater. (And a failed game.)

Of course, all defense is no good either; B.O.B's not going to get tired, so unless the idea of riding out the mechanical assault for the rest of eternity sounds good to you, you'll want to trek across town whenever possible and lay down some siege of your own on B.O.B itself. Enemies spawn in waves, and if you're quick and strong, you can net yourself some valuable "down time" where you can hammer away at B.O.B's defenses before a new set of bots rolls out to rain on your parade. 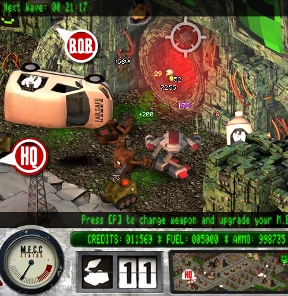 Analysis: Easily the game's strongest point is its presentation, which is some of the best of its kind I've seen represented in a flash game before. The aesthetic design is appealingly shabby, giving the whole thing a retro-verging-on-apocalyptic feel. There's a lot to see (and explode) as you stroll around town (and explode it), and chock full of subtle (and unsubtle) nods to popular culture. The town itself is beautifully made and a lot of fun to tour, but it does feel disappointingly empty; I realise the game is supposed to be a simulation, but c'mon... don't you want a bunch of screaming civilians running around your metal feet?

Not that you would have much time to stop and smell the roses, admittedly. Still, it would have been nice to see more variety in the game; you never really feel as though you're getting better at it, just able to soak and deal more damage to the hordes of mostly identical enemies. Most of the time the only real strategy is clearing the field of foes long enough for you to sprint across town and deal a few choice hits to B.O.B before running back to HQ in time for the next wave.

Ultimately, that winds up feeling like what's holding The Terminal back; it has the design, the gameplay, but it's just a bit too repetitive. A little more variance would have gone a long way to making this the type of thing you go to over and over again to get your action fix. As it stands, however, The Terminal is still an absolutely stellar example of its genre; beautiful to look at, and smooth to play, it's easy to throw yourself into the action. If only there were a bigger variety of it.

Yes, it's all a bit frenetic isn't it, which makes for tedium rather than excitement. Could do with slowing the whole thing down and having some sort of tactical objectives rather than just everybody piling in all the time. Given that your robot can push fuel cartons around you could also be creating roadblocks and pinch points.

Wow... when i first saw the title, I thought it was a flash game version of Tom Hanks' movie of the same name.

Nice review, thanks! We have the engine, the graphics and the concept, we'll be focusing more on gameplay for the next one, perhaps make something similar to Syndicate? ;)

the world is long overdue for another game like syndicate

Interesting, apparently waiting out all the waves will cause you to lose too.

My best strategy so far:

Wait up to buy the rocket launcher... eventually an armor upgrade or gattling gun upgrade, but only when necessary!

Max out the rocket launcher, then blast the BOB away. Careful not to get hit by the explosions...

Has anyone got all the pictures? I still have 2 empty slots...

@Voodoo Smile : Which pictures do you currently have ?

When I saw the screenshot I thought Syndicate immediately. I'm excited for this "Syndiclone" in the future.

Oh, and I also found

Then the only missing picture is :

The DeLorean from Back to the Future, it is crashed near B.O.B., upper right corner of the map.

The "police station" took me forever to find, until I realized that you were talking about the

TARDIS I'd already found! Right, I guess people who have never seen Doctor Who would just be like, "Okay, a strange compact police station, I guess".

Where's that "popsicle" at?

between two buildings to the left of the HQ. You have to go around and push him (it?) out.

I don't know...the hit detection is REALLY wonky for the rockets. Especially when attacking B.O.B., objects nowhere in the line of fire will catch a rocket and damage you with the recoil. For example, if your mech is facing B.O.B. and there is a clear line of fire, a shed behind you (!) will often register an explosion and you'll take damage. It's a little too tricky to find a sfae place to stand when using rockets, so always keep plenty of $$$ on hand for repairs. Made the game a lot more frustrating than it had to be.

3,345 Views
9 Comments
chrpa— Jayisgames needs your help to continue providing quality content. Click for details Hi! Another week is over, another Weekday Escape is here! This week we start with two Amajeto's escapes, both one-scene and full of puzzles. Cute escape by...  ...

1,917 Views
0 Comments
chrpa— Jayisgames needs your help to continue providing quality content. Click for details Welcome to Mobile Monday! This week we start with Hirameku's a clever crossover between RPG and a puzzle game. GBFinger Studio added a new game to their...  ...