On the surface, it's easy to put Thomas Was Alone in the puzzle platform genre, citing games like The Lost Vikings when you discuss the gameplay mechanics and mentioning VVVVVV as a possible source of lo-fi indie inspiration. But after you've spent some time with the game, you suddenly realize it's much more than just a platformer. Thomas Was Alone is an interactive, character-driven puzzle experience with a beautiful audio visual presentation and gameplay controls/physics that were no doubt fine-tuned with fastidious precision. 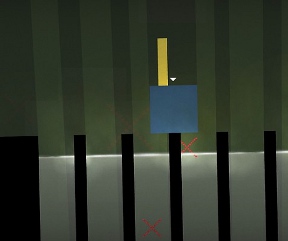 One morning, Thomas woke up to realize he existed. This was quite an unusual thing, seeing as how he didn't exist before. He's alone, which is something, but he's also quite good at falling. Not only that, but he seems to be able to fall in the opposite direction, something he'll call "jumping". Before long, Thomas meets Chris, a shorter, heavier rectangle who can't jump quite as high (but gets along just fine all the same, thank you). Soon, Thomas meets more friends, each with their own unique shape and special ability, ranging from the tall and thin John to the surprisingly buoyant Claire. The newfound friends have to work together to make it through each level, hopping on top of each other's heads and taking turns climbing across the dark landscape as they avoid dangers and press switches to transform the very layout of the land.

To move about in Thomas Was Alone, use the [arrow] or [AD] keys, with [up] or the [spacebar] to jump. You can switch between characters using [Q] and [E], or jump straight to one using the [number] keys. Simple controls, indeed, and once you get the hang of fast switches, you'll be well on your way to mastering the subtleties of single player cooperative quadrilateral gameplay! 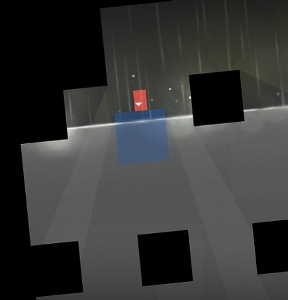 Analysis: Thomas Was Alone isn't merely a technical piece of precision goodness, it's also a well-written game, stylistically speaking. Imagine if Douglas Adams wrote children's fairytales and you'll get the basic tone the writing takes. Thomas and his friends all have very distinct personalities, likes, dislikes, thoughts, and attitudes towards each other. Not only that, but through the narration, the dynamics between the group grows as the game progresses, something you rarely see done with such eloquent brevity. Publishing the game without the brief pieces of texts would turn Thomas Was Alone into just another puzzle platformer to throw on the pile (albeit one with a nice presentation and some excellent gameplay). With just a little bit of characterization, the game suddenly springs to life, endearing itself to the player as they, too, become part of the team.

Apart from the wonderful presentation (with soundtrack by David Housden), gameplay in Thomas Was Alone is just as solid. Characters move in different ways, each with his or her own weight and speed. Chris feels so heavy, somewhat matching his personality, and John moves as if filled with air. The puzzles are smart and quickly get more intricate, and while they do tend to repeat a bit over time, you never really mind, as the game has already managed to charm you through and through, so a few repetitive jumps are no mind.

Thomas Was Alone is a little indie masterpiece that does great things with narrative and minimalist artwork. It's not just a platform puzzle game, it's a story of some little self-aware blocks who are on a quest to figure out what this whole "existence" thing is and why it's so utterly fascinating!

Windows:
Download the demo Get the full version (Desura)

To me, Thomas was Alone might be a masterpiece, but it's an expensive masterpiece for the duration of the game. I simply loved the demo and I think that this might become one of my favorites indie games, but 8� is too much for me. :/

I mean, I dig the minimalistic approach, the cutesy story and the faint "Lost Vikings" vibe, but I also found it slightly tiresome and the controls were just a bit too laggy for my taste. It's good, but nothing too special - with so many high quality Flash games we have today, a bunch featured on this site alone, Thomas just doesn't do enough for me to make me want to shell out 8 euros for it.

So yeah.. I'll skip it for now, but will most probably snatch it up if the price drops, and definitely if it appears in a future Humble Bundle. :)

From playing the demo it was mostly negative:
- platform gameplay on par with a rudimentary flash platformer
- sluggish controls
- no graphics

I was underwhelmed after reading the hype from the review, it's not a masterpiece by any means. I would describe the gameplay as the Towers of Hanoi (itself a very tired gameplay trope) as a platformer.

I'd say Thomas Was Alone is not too expensive, and a darned sight better than most films out in the last year. If the developer said "You don't get it." he'd be rightly accused of arrogance. However, this is one of those experiential titles that are granted their value by the narative process you go through.

In my opinion, the game is FAR greater than most Flash platform games of the same nature, and the narrative really makes it stand out. The visuals have a lot of subtle effects, with dynamic lighting, smooth gradients, and a pleasing overall style. And the controls are different for each shape, so if one feels sluggish, the others feel light and floaty.

As for the price, I certainly don't think 8 euro / 10 USD is too much. The race to the bottom for indie game pricing has gotten out of control, and when we think $10 is asking too much for an afternoon of entertainment, we've definitely gotten spoiled.

Didn't want to get into this discussion but I kinda feel called out as "spoiled".

Price is subjective. Nothing is objectively expensive or cheap, it all comes down to the person actually giving his/her money and feeling he got the worth of the amount spent.

Now let's be realistic. High quality computer games are cheap nowadays. Triple-A titles are being sold at less than 8 euros. And Flash games have evolved far beyond I ever hoped to see totally free games could be. This site alone features tons of free games that are of incredibly high quality.

Now I try to support indie developers as much as I can. I bought plenty of indie titles at their original full price. World of Goo, Braid, Untitled Story, Limbo, Magicka, Meat Boy, Binding of Isaac, Penumbras... the list goes on.

With this one I just don't feel like shelling out 8 euros. Maybe I'm spoiled, kill me. It's not plenty of money, I agree. But still, it just doesn't have that "edge" that I expect of indie games to justify that price mark.

Oh, I definitely wasn't trying to call anyone out as being spoiled! I really did mean "we" as in most of us players on the internet. We get cheap indie bundles, Steam Summer Sales, discounts, and dollar mobile games, not to mention the massive pile of free games that crosses our eyes each and every day. Unless we're completely enamored by a game, there really isn't a reason to spend money on it right away. It's not necessarily a bad thing, it just means we're spoiled for choice and get to be choosy about what we buy and when we buy it.

I think that this game is absolutely brilliant.

I understand all the comments above, and you're right, there's a lot of subjectivity, but coming from a film/animation and games background, I haven't played such a charming and well written short story for... well, I'm too sure since when.

The crafting of the writing by Mike Bithell (and obviously voice over by Danny Wallace) drew my attention and emotions through and the simple dynamics, though not ground breaking, were transformed because of them.

Price tag wise - well, I'm happy to pay money for this kind of quality narrative construct and it's taught me that it actually becomes worth something when there's a tag to it.

What a delightful diversion! The puzzles and gameplay mechanics that the game has to offer aren't particularly revolutionary, but the connections I developed to the characters just from the quirky descriptions in the narration made it a very unique experience. The developers have got a gift for giving life to their characters - I felt more life in these faceless rectangles than I do in many other run of the mill casual games. Wonderful game, and I'll probably buy the full version even if I don't win here.

One more brief note, the visuals were great! I love that Unity is growing in popularity as a development platform, the graphics here were smooth and crystal clear.

Ugh I'm sorry, that was meant on the Link Dump Friday which I had open in another tab. At any rate, the above remarks stand (minus the contest bit), I'll just put it over on the other article as well.