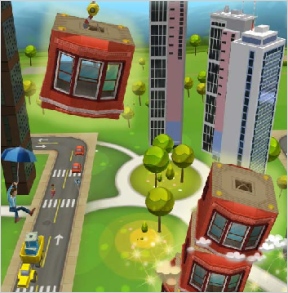 Just as in the original, you operate a crane that swings blocks of a tower back and forth. Each block on the crane represents one storey of the building's height. You can either click the mouse button to release the block or push [space]. Once you drop the first block, the foundation of your building is planted. You'll try to aim for that exact spot on each subsequent drop, unless you miss (as you no doubt will). You have a certain degree of variance to miss drops so that the block will stay on top of the building without falling over. As long as you don't drop a block beyond that, that's pretty much where the life-like physics in this game stop. You can build a tower resembling the Leaning Tower of Pisa without it toppling over. Of course this isn't the objective, because the more precisely-stacked the tower, the more people you'll get inside it. An ideal tower would be perfectly stacked from ground to top, without even one block being off to the left or right. Perfect towers will net you the maximum amount of inhabitants, which is what you're striving for. If you do miss a block, or drop it in a way that causes it to tumble over the side, you'll lose one out of three lives. Once all three are gone, construction of the tower halts as-is and you can either place it or go back and re-build it.

The story is that your construction company is contracted by the mayor to revitalize certain zones of the city by building residential apartments, office buildings and even skyscrapers. Population is key, and the currency of the game. The more buildings you have in a zone (and the better the quality of the buildings), the bigger that zone's population will be. Each zone has a population goal that must be met before moving on to the next zone, so unless you get it all right the first time, you'll have to go back and rebuild some towers, maybe even shuffle some around.

Things get interesting when you get to the puzzle element of the game. There's blue residential apartments, bigger red apartments, green office buildings and yellow skyscrapers. But you can't just build any color tower anywhere you want within the zone. Each tower has a rule to it, such as the green office building, which must neighbor both a blue and red tower. This means you've got to think ahead and place your towers in such a way that allows you to fit the most high-population towers (green and yellow) as you can into the zone. Sometimes you'll have to go back and demolish a tower or two so that you can redesign the immediate area to allow a green office building or yellow skyscraper to be built. Eventually you'll unlock the "Mega-Tower," which has no limit to the number of inhabitants it can hold, but it's got to be neighbored by all four colors, so you won't be able to build many. 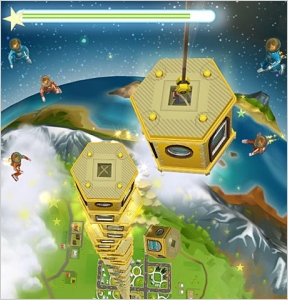 Along the way, you'll get little upgrades and bonuses for your towers, like population cap increases, and specialty blocks like balconies or trophy roofs that add even more population to the tower. You can only use special blocks like balconies after stacking a certain number of blocks (usually four) exactly on top of one another. There are other score and population modifiers based on perfect stacks, such as combos and various accomplishments (20 perfect stacks in one tower, for example).

Analysis: If you've always enjoyed the occasional stacking game as they've come out, you'll probably love Tower Bloxx Deluxe. Just like many other flash-turned-download games, it takes a well-received game concept and makes it even better by adapting it to a PC game; packing in better graphics, enhanced gameplay and more replay value. The stacking mechanic is more satisfying than any I've seen in flash versions, featuring much more fluid movement and physics. The graphics are fully 3D, even while in stacking mode, as showcased by the "camera movement" feature that you can use by pressing down the right mouse button to admire your work from different angles. There are lots of nice little touches thrown in, like people filling your tower as they fall from the sky clutching little umbrellas. Backgrounds feature a typical "cute" cityscape, with planes, birds, hot air balloons and blimps flying by as your tower grows higher.

There are four modes of play available: story mode, quick play (in which you try to build the tallest tower you can), time challenge and party mode (allowing up to four players to play against each other on a single computer). Overall, Tower Bloxx Deluxe lives up to the hype of its predecessors and raises the bar once more. It's an entertaining game for all ages, whether you're an action addict or puzzle fan, as it features elements of both. The sky's the limit; see how high you can go.

I tried the demo. Cute. Kind of a one trick pony though.

You forgot to add the "Demo" tag to this one.

I like that kind of games, and it's great to have one to play offline.

I found this before. it was going crazy with colors, and i couldn't read anything!!!!

This was very pleasant surprise! This is totally new. I first thought this was not my kind of game and it felt boring, but then it hooked me.

has anyone developed a strategy for putting as many high population buildings as you can? because in the flash version it was possible to build almost an entire row of yellow buildings.

I found this video:
http://uk.youtube.com/watch?v=QLdZDTIMjtA

Seems to be that you can build at least 190 blocks hight tower....