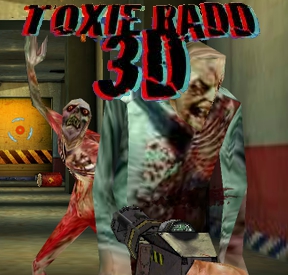 Joining the pantheon of Rad Dudes Who Don't Need Both Hands To Fight Monsters (whose patron saint is obviously Ash) is Joe, the machine-gun-armed hero of Xplored's newest first-person rail shooter Toxie Radd 3D, a wonderfully cheesy and impressive game House of the Dead would be proud to call one of its own. Joe was an inmate whose arm was replaced with a gatling gun as part of an experiment, but soon after, zombies started attacking the city and now he's fighting to survive. As a railshooter, the game drives you from one area to the next. Your job is to concentrate on killing zombies by aiming with your mouse and firing with the left mouse button. Hit the [spacebar] to perform a melee attack, and hop left and right by hitting the [A] and [D] keys to dodge enemy projectiles. Scattered around you'll find power-ups that alter your weapon for a brief time, and skill coins that can be used between levels to upgrade your stats, so don't be afraid to blast any crates you come across.

Toxie Radd 3D keeps up a fast pace; aside from the between-level breaks, there's not a moment when you're not surrounded by enemies, but with infinite ammo you don't have to worry about reloading or counting bullets. This lets you focus on the fun stuff: blowing away the zombie horde while dodging enemy axes and acid balls and making sure zombie rats aren't chomping on you feet. This makes for some frantically fun moments, aided by a smooth difficulty curve and a generous approach to death; you'll jusually restart a few steps away with full health. Unfortunately, the camera sometimes hampers the fun moves to an angle that makes it hard to see enemies on the floor or at far corners. This isn't a gamekiller, but it does make things frustrating at times.

The boss battles every few levels could be one of the best parts of the game, but since they're all the same apart from a few tricks for added difficulty it's a bit of a let down. Still, they break the game up and maintain the on-your-toes pace. The game's "3D" graphics are well done, even if they're not the prettiest (perhaps appropriate for a game about disgusting mutants), but some more variety in the environments would have been welcome. In spite of these complaints, Toxie Radd 3D is a fun, fast-paced game that fans of classic arcade shooters where you point plastic guns at the screen will enjoy. If you love killing zombies and want a game that doesn't take breaks from splattering them, then Toxie Radd 3D is right up your alley.

There us a bug. Game dun proceed after some time beating the second boss. Just stuck at the scene after shooting all the zombies