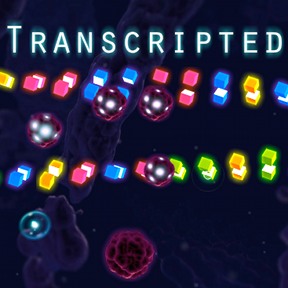 Do you like Zuma, but wish that it and its various sequels and clones would abandon their hoary, fantasy-archaeological trappings for a more hyper-modern medical theme, and also had bullets, for some reason? Apparently the developers at Alkemi Games did. Transcripted is a puzzle-shooter hybrid in which you play some sort of electro-plasmatic immunological agent set on harvesting bits of colorful DNA cubes from hostile biological invaders and blasting them at nefarious DNA strands.

Control your sparky unicellular protagonist with [WASD] or the [arrow] keys. You can switch between weapons with [space], and aim and fire at foreign organisms with the mouse. When enemies drop colored hunks of DNA, you can pick them up and aim them at the larger strand of DNA being processed around you. Holding a DNA bit makes you temporarily invincible, but you can only hold it for a short while. Like Zuma, creating a sequence of three or more of the same color causes it to disappear, which is good. You need to score a certain number of these sequences, delineated by the progress bar at the top-left of the screen, to beat each level. Create combos, blast interlopers, collect power ups, and save your host from dire infection.

Alkemi kindly lets you start any level at any time, but I would recommend starting at the beginning nonetheless. As there are merely 9 levels, the difficulty ramps up pretty quickly. The serene backgrounds and soothing soundtrack belie how tense the game gets by mid-levels. It's challenging, very nicely produced, and cleverly combines two types of gameplay into something novel and fun.

This is definitely one of the more unique games I've played as of late. I love the art, piano, and ambiance this game offers, it creates an excellent mood for the game. As for the game-play, I wasn't entirely all for all the levels being available right at the start, made me feel less accomplished when finishing a level, but it's not too much of a set back. The controls and concept themselves are excellent though, so I can definitely say I enjoyed the game. Good stuff, nice review, keep it up.

It's too hard to keep track of the the shooter part of the game. I keep trying to get to the cube, try to get to a better position, then lose the cube and get bombarded with tons of things. Managed to get to beat level 1 and 2, but gave up on level 3.

Then again, I'm never good with this kind of shooters anyway. Not a game for me.

Could I just say, while all the reviewers at JiG do a really great job, on "day-to-day" games like this one I think a shorter review is perfect.

PS. Sorry for not actually commenting about the game, I'm sure it's very good!

Great game... not touchpad friendly. Becomes quite frantic as soon as I reach level 3. Good enough though that I might have to scrounge up a mouse just to try again :>

Definitely not touchpad friendly! Lots of fun with the mouse though, at least as far as I've played (4th level).

Honestly, I didnt like this game very much. I like to play games with out reading the instructions first, and just figuring it out. Like the game of "LIFE", In this game, it would be better to read the instructions.