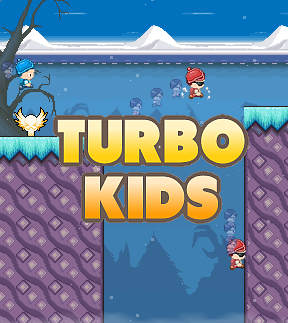 Did you like Canabalt? Then Eugene Yailenko's action-packed racing game Turbo Kids may garner your interest. It expands on the successful "one button" formula by adding a second button, used for powerups, while keeping the same run'n'jump gameplay fans of the genre know so well. Use the [X] key to jump and [C] to shoot... movement is automatic, so just stay on your toes. You can fire freezing snowflakes at runners in front of you to temporarily slow your opponents, but they can do the same to you as well as take advantage of power-ups in your path. These (upgradeable) power-ups are found through the courses, including opponent-slowing snowballs, speed boosts, and a slightly confusing rocket attack which switches your position with the runner it hits. After you complete a race, you can spend any coins you earned to increase the strength of these abilities.

As one of the titular Turbo Kids, you have the option to compete through either Championship Mode, racing through the snow against 7 others to a fixed finishing line, or Marathon Mode, a time trial of sorts where your goal is to reach the front of a pack of 50 in the fastest time possible. Simple yet casual and fun, Turbo Kids embraces the snowy setting with some colourful graphics for a speedy, icy adventure that's great to pass the time with year 'round.

I played through Championship Mode, and it was a fun little game until the final level, which had a very weird design. It had at least one very hard-to-time jump, which is not itself a problem: the problem was that the AI opponents could never ever make the jump. If you got it right once, you had the whole remaining 75% of the course to yourself.

You can't powerlevel after beating the final level; it forces you to restart the game.
I am thoroughly displeased.
Other than that, it was good.

I could enjoy this game if it had been coded differently. As it is, it runs too slowly on my old machine, it freezes all the time. I have no such problem with, say, CycloManiacs.