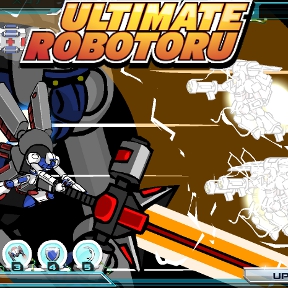 Would you like some cheese with your shooter? Berzerk Studio and Adult Swim's Ultimate Robotoru comes with a big gooey helping of it, and a whole lot of arcade action besides. Control your continuously blasting Gundam-ish avatar with the [WASD] keys (or the mouse) and use [1] to [5] to activate your super special flashy attacks when their power bars are full. Baddies will come at you in waves, between which you and your nemesis will deliver some, uh, exposition (I guess) in a way that effortlessly parodies the poorly translated games of the early years. Destroyed enemies automatically grant you cash, which you can spend on upgrades at any time simply by clicking the button. Ain't technology grand? If you die, or if you decide to stop playing, you can just pick up the game again at the last wave you started.

Strange, frenetic, and over-the-top, Ultimate Robotoru is at heart a straight-forward side-scroller, but wraps it up in such a great gleaming package that its hard not to enjoy it. For some people, the game's relative simplicity combined with the heavy reliance on humour centered on poor translation, means the game will wear out its welcome quicker than others. It also would have been nice to have a larger screen and playfield to zip around on. But for an injection of giant robot rampage combined with ginormo swords, orbital lasers, and classic arcade action, you should make a lunch date with Ultimate Robotoru. MAKE YOUR TIME.

As with most Adult Swim games, very repetitive and no depth. I bored-quit at wave 6.

Not REALLY a terrible game, just... yeah, pretty repetitive. Fun while it lasted, though.
Also, a typo in the jig category-tag: says "adultsim" instead of "adultswim."

Not enough damage. And either upgrades are too expensive or income is too sparse.

Ok, we get it: Japanese translations aren't always the best, and are sometimes funny. But this is just... contrived.

Contrived script aside, the gameplay was ok, for a while. Being a "completionist", I started doing some quick math and estimated that I would have to endure between 15 and 20 waves to fully upgrade, if the game even went on that long. No way that was going to happen. Which is really frustrating, because as a completionist, I really wanted to see the end of the game.

At least when you grind in WoW, you have people you can talk to in game.