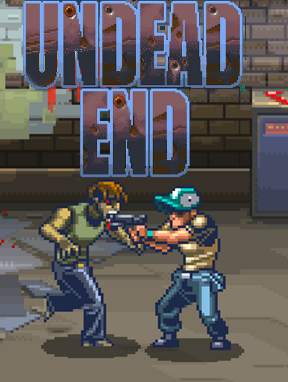 In the side-scrolling action arcade game, Undead End, we are asked the age old existential question, "So what do you do when you find yourself stranded on a lonely country road with no gas in the tank and a major zombie outbreak happening all about you?" While this question has plagued us for ages, here we finally see that the answer is clear; we take out our trusty baseball bat and hand cannon, and we put them to work.

Your goal is to move from one area to the other, leaving piles upon piles of the freshly re-killed undead in your wake, until you find some gas and a vehicle to put that gas in so you can drive off to safety. Long before that happy ending comes about, though, you'll be faced with hordes of zombies. You'll also be faced with more than a few locked doors, the keys to which can invariably be found on specially marked undead. To do all of this all you have to do is move with the [arrow] keys, use [Z] to fire whatever missile weapon you are equipped with, [X] to swing your melee weapon, and [A] to do just about everything else from picking up items to opening doors.

At first blush, Undead End looks a little like classic platforming shooters such as Metal Slug or Contra, but in truth this game has much more in common with the old arcade fighters such as Final Fight or Streets of Rage. Like its spiritual ancestors, Undead End has plenty to offer. The graphics are gorgeous with nicely composed backgrounds and beautiful sprites dripping with personality. Also, the simple but effective controls coupled with the non stop action give us buckets of mind-numbing, button-mashing, zombie massacring fun.

Unfortunately, Undead End also suffers from a few of the weaknesses of its parent genre as well. Hit detection is tricky thanks to the flawed 2.5-D set that can make lining up with enemies troublesome. Also there's an awful lot of monotony brought about by fighting the same kinds of monsters over and over again. Older games tried to cover this up using palette swapped enemies, but we don't even get that here. Finally there's a lack of balance between zombie speed and playing area. That is we found that often times you have to backtrack a great deal before turning around to attack a zombie because of their speed, but if the zombies were a touch slower, the playing field was wider, or even if the main character did anything more than saunter, this probably wouldn't be as much of a problem.

For all of its flaws, though, Undead End reminds us of the imperfect appeal of the genre and why these games were such quarter-munchers. Sure, the zombies may want to eat your brains, but the truth is you don't really need the old gray matter that much to enjoy all the mindless hack and slash action.

What am i doing wrong? I have a blue key and green key, but just keep going down the same 2 hallways

I want to point out that the "A-Z-X" action controls were kind of troublesome, as i had to seriously alter my hand position to pick something up off the floor. When something like that has to be done on the fly as it often is, this can be a dangerous control scheme. A classic "A-S-D" control scheme has been used in more than one flash game of this kind and would've worked like a charm here.

Wow, I really enjoyed the spriting on this game; really brings back some of the classics. Unfortunately, it was way too short. Perhaps they could have recycled some levels and enemies instead of bringing in new ones each round.

OK, is this one of those "You Have To Burn The Rope" joke-games? "Dead End Motel?" There is nothing to do! I follow the red arrow, it sez "Go," I go... And stop at the end of the screen under the motel sign. A bug? A joke?

I think the developers are fans of Half-Life 2. ☺ http://imgur.com/kgAFi

everything about this was fantastic, except i wish it had been about 100x in length... and maybe slightly more involved environments.
i would love to see them make a fuller wiiware version or something along those lines.

find and enter the blinking red square by going next to it and press A, to get to the next level. sometimes its not at the end of the level, but somewhere in between.

I like this. alot. but personally, it could have had some save point in the way, so I could get back and play the next day.