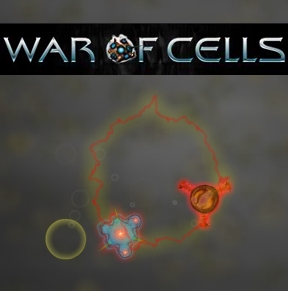 Global warming is going to be our undoing, but not because we will suddenly run out of polar bear pelts or ice for our afternoon drinks. Thanks to rising temperatures, more ice starts to melt, unleashing a virus that has remained frozen for millennia. But this is not any virus. It is alien in origin and it plans to evolve and destroy us. It is also intelligent, because it is who you are in the action/strategy game War Of Cells, the first online Flash offering from Lognetic.

Played from a top-down perspective, you navigate the cell using the [arrow] or [WASD] keys, while [Q] and [E] rotate the actual cell body to realign the weapons and the mouse aims any ranged attacks. Weapons come from the cell's three pods, which can be armed with various abilities based on DNA strings you unlock after each level. Some are for ramming, some shoot projectiles and others are dangerous to touch. Some use your energy, which you replenish by grabbing some nutrients out of the pool you find yourself in. Some spew trapping goo, inject viral DNA into cells or attract molecules to you. Others, like the interior of enemy cells left after you pulverise them, add to your health and also to your nutrients... more on that in a bit. 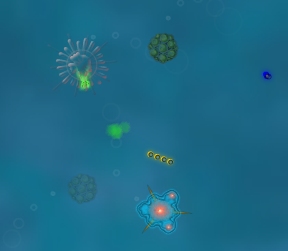 Bosses are larger cells, usually armed with special enhancements... some which you can use for yourself. The main objective of the game is to defeat all twelve of these bosses. It starts off easy enough, but some fights are tough. To help you out is the ability to multiply - chew up enough nutrients from downed cells and you can split yourself, forming a new cell. This cell can be armed individually and then assigned a basic artificial intelligence to make it do stuff (basically: roam-and-kill or kill-kill-kill). This is not required (in fact, I only discovered it late into the game. Hint: you click on your arming triangle to cause a split), but it can turn the tide on some levels. On other levels it's a bad strategy. Mostly, though, it makes you feel like the mean viral MOFO you are supposed to be. 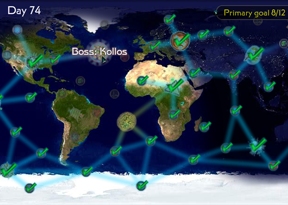 Analysis: I am willing to wager that this game will bring out a lot of "it's boring" and "I don't like it" comments. Some will also complain that unlike games like Spore's early levels and the excellent game flOw, there is no real sense of evolution. I'd be inclined to agree — if you play War Of Cells along those lines it is a bit of a half-baked idea.

Likewise the levels are not terribly challenging (though you can try a higher difficulty if you feel overly dominant). They vary a little, while the increasing appearance of toxic conditions and sucking tides shake things up. The rival microbes also become more dangerous and aggressive. But you'd have to dig deep to hit any REAL challenge from this game.

So what's the hook? It comes in the variety of ways you can play War Of Cells. The sequences you unlock pave the way for many different strategies and combined with the cell-splitting makes for an interesting mix. It seems novel, but it gives a lot of replay value. Granted, this renders War Of Cells a bit limited in who it appeals to, but if you find the spark in its core, you'll appreciate what it does. It's a classic case of the journey versus the destination. If you are the type of person who always keeps the finishing line in mind, this game is not for you. But if you are just happy being a nasty alien virus hellbent on destroying the planet...

I played this recently, and I found it to be poorly balanced. Some abilities where extremely, overwhelmingly powerful, while others of the same tier were practically useless. It theoretically allows you to switch strategies by redistributing your upgrade points, but if you pick the wrong upgrades from the levels(and it is hard to tell which ones are the right ones the first time through) it is impossible to switch.

I played through focusing on one class, and even with the high-tier abilities equipped, I was impotent. I played again with another class, and I was tearing through levels with low-level abilities.

So, where is the game? All I get is an advertisement. It appears to load fine but after 5 refreshes no game has loaded.

[What OS/Browser/Flash Player versions are you using? -Jay]

Ugh, I didn't like this one. Beat most of the bosses, got most of the awards, but it really was just time spent trying to like the game. Personally I found the keyboard "relative" control scheme, the mouse "absolute" control scheme and dealing with the different firing arcs clashed pretty horribly. The upgrades were underpowered, repetitive and the descriptions deceptive. Like the, "Gain health when enemies bump into your cells". Never did get that one to work. Then that whole cell division thing. Was there a point to that? I'll give it a 2 for effort.

Sorry, one nit to pick: it's not a virus. It's way too big/complex, has a membrane & organelles, synthesizes its components from nutrients it takes in, and reproduces. Definitely a single-celled organism.

I have made the game with a friend of mine. We have been working on it for several months in our spare time (as we have normal jobs, family, etc.)

It is really nice to see that the game has been reviewed by Casual Gameplay - big thanks for that!

Find it kind of funny to compare a flash game with spore, though ,-)

Kind of hard to control. I wish you could use the mouse instead.

I have absolutely no idea how to create pods. The in-game instructions didn't help at all. Anyone help me out plz?

There is a triangle in the bottom center of the screen. At its corners are three squares. They will be empty if you have no pod in that slot.

To grow a pod, click inside one of the squares and select an available pod icon. The pods take a few seconds to grow at the beginning of the level, when changed, and when certain kinds "expire."

Each pod must be individually selected. The triangle itself, when filled by consuming nutrients, can be clicked in order to divide. To arm your remote cell, you must again select its pods, then a control scheme.

Hope all this helps and sorry for the obsessive detail. :)