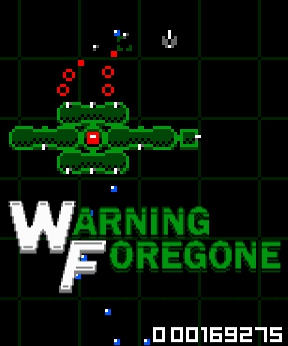 Did you play Warning Forever? No? Go ahead and download that jewel, if you want. Give it a play. I'll give you a minute.

Finished? Good. Warning Foregone is a web-based retro arcade shooter developed by Jakub Wasilewski and based heavily on Warning Forever. At first glance, Warning Foregone seems like a simplified, pixelated version of its spiritual predecessor, but I assure you, it stands on its own as a solid game. Using the [arrow] keys, you pilot a small, pixelated ship through a pixelated world populated by one single burgeoning, ever-strengthening pixelated boss. This one enemy ship will start off small (the "Pure Heart") with only four small cannons. Destroy it by shooting its core and a new ship will appear, replete with upgrades. But that's not all. Depending on which areas you target, the boss will add cannons, lasers, and turrets to different parts of the ship, enhancing itself in an attempt to bring your meager little ship down. You start with 80 seconds on the clock; destroying a boss will net you 20 seconds while getting destroyed in turn will lose you 20. Destroy enough bosses to see one of three end-game boss types... good luck trying to discover all of them!

Analysis: So you understand the concept, but want to know just how good the boss evolution is. I will now describe my thought process upon initial and subsequent playthroughs of Warning Foregone. Ahem.

Warning Foregone goes out on the JIG listserv. I play it once. I get a few bosses in and die. I respond with an email including this line: "How many play tactics can you have when you're limited to just shooting the thing from the front, back, or sides?" Realizing I have essentially volunteered myself to review the game, I decide to play it again. This time, I try to destroy the cannons in a different order. By the third iteration, the boss is completely different and significantly more challenging than my first run. Immediately I grasp the concept of "replay value" and vow never again to judge a game on one play. 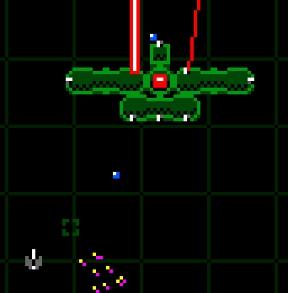 So there you have it. Warning Foregone has a few advantages over Warning Forever. The bosses' evolution is more immediately evident in the former, though players may miss the enormous, screen-hogging bosses from the latter. Warning Foregone also features several upgrades to your ship's cannon that present themselves in a unique way: only one is available to you to begin with, and you must unlock the rest through achievements. Of course, Warning Foregone is not without its faults. For one, I found both available aiming schemes to be clumsy. One auto-targets the boss's "eye" every time you stop firing, which can be frustrating; the other aims in the opposite direction the ship is moving when you are not firing, which I just couldn't get the hang of. And while I consider myself a seasoned gamer, the frustrating aiming mechanics combined with wave after wave of increasingly tricky bosses make for a difficult, if satisfying, game.

Warning Foregone is an addictive little shooter, as these types tend to be. In my opinion, the "intelligent evolution" mechanic, while sparking plenty of debate in quads on liberal arts campuses nationwide, is also a somewhat underused and underdeveloped one in casual gaming. This is of course due to technological limitations, but games like Warning Foregone demonstrate a push for gameplay that tailors to the player's abilities while simultaneously challenging us with difficult evolutionary concepts. Who is this boss? What is my motivation? Am I destroying that which is learning? Maybe that's digging in a little deep. If you think so, you clearly don't have a liberal arts degree like me, and as such, congratulations on having a career! Why not use Warning Foregone to unwind?

Having played Warning Forever extensively, I was looking forward to this game.

I can tell you that in Warning Forever, the "aim adjusts to the opposite direction of movement" scheme works there.

It doesn't work as well here.

In Forever, the adjustments are gradual and allow for small alterations to the firing angle and spread.

In Foregone, there are 8 directions and one spread. Questions of spread are answered later on when more upgrades are unlocked, but there are only eight aiming directions, and that can be hard to keep track of when you're trying to dodge fire and select which parts to blow off first.

I think that if the manual aiming system were more gradual and nuanced, I'd feel right at home. So Wasilewski got everything right except the control scheme.

First time, played it once on auto, died, gave up. This time, since it was featured (and the editor said "Don't judge by one playthrough!) I played on auto.

Totally different game. Got up to "The Mushroom" this time. Nice!

Meh. Colour me unimpressed.
The controls are ungainly (I am left handed and it annoys me to no end when game developers won't let me change the controls), the aiming awkward (what is wrong with using the mouse a la BubbleTanks?), and the fact that you can only aim in 8 directions while the bosses have the full 360 degrees is just icing on the cake.

I really tried to like this, but after 8 playthroughs I found my self fighting the controls more than the bosses. There is something seriously wrong when you have to fight the *mechanics* of a game more than the in-game enemies.

The selection of the weapons is nice, especially since the game is gracious enough to TELL you the DPS so you don't have to simply guess.

I like the evolution of the bosses - it seems to push the player to attack from different sides as the boss grows more powerful with each variation.

The aiming for shots is pretty awful, though. I'd prefer auto-aim and mouse aim, and make WASD an alternate movement keyset. Then you manage to satisfy lefties and track-pad players in one fell swoop!

Alternate plan, make aiming digital with WASD and the arrows.

Anyone know the thresholds to unlock the 7th and 8th weapons?

I don't like this game for one important reason:

if you die, you could respawn right underneath the enemy, and there's not enough time for you to move out of the way.

That alone makes it a one-star game.

The original Warning Forever had no Mouse Aiming, since it was an experiment in different control schemes (as well as procedural gaming). The manual aiming made sense in that, since you're going around the enemy in circles, your aim would usually point towards your enemy (given an 'oppose motion' aiming scheme).

I'm glad that Wasilewski has tried to keep to that spirit of the game, but he hasn't quite succeeded.

I understand this game is going for a retro feel, but bosses in old games wouldn't shoot in 360 degrees...so if the boss isn't limited to the eight basic directions, then the player shouldn't be, either.

This review caused me to first go try the predecessor, Warning Forever, and I found it to be excellent. This game, however, is not as great. Still some good fun, but the difficulties others have mentioned (mainly, the fact that aim control is limited to eight directions) keep this from being as enjoyable. In the other game, I felt like I was in control, and my deaths were always because of my own limitations. In this game, some of my deaths felt as though they were due primarily to the limitations of the control scheme and the respawning issue. That sucks the fun right out of things!

I love it. Someone should write a guide on the boss's upgrade mechanics. For all those complaining about spawning under the boss, if you move right away, you'll be able to get out from under him before your invincibility runs out. I wish you could move faster though, and 360º shooting that changes direction on the fly would be nice. I'll give it a 4.

I'm going to agree with what people have said above - it's a nice idea, ruined by the control system and the respawning. The game is heavily biased towards attacking the boss from underneath - not only does the boss start off near the top of the screen, but you always respawn underneath it.

Plus, not only is your aiming too limited, but it doesn't react quickly enough. There are many times I found myself flying up to directly above the boss while not shooting at all, hitting the fire button and finding myself shooting diagonally past the other side of it, because the aiming hadn't yet decided I should be shooting downwards.

Both of these things combined means that it's heavily biased towards just shooting the boss from underneath, as it wastes much less time, you're much more likely to hit the boss, and you're much less likely to die. So it actually ends up working against the idea of the game. It's a shame, as there's a great game in there, it's just that this is not it.

I can't seem to get the cold heart to appear...anyone know how?

The gold heart seems to arise from "block" type bosses, the black heart from "wider," "ankkh," and "tower" types...but maybe I'm missing something there.

I really like the controls. Having previously enjoyed the heck out of Warning Forever, I think this one works really really well as a simplified version. To the people complaining about the aiming and 8 direction system, I can only say keep playing, it quickly becomes second nature. I've been using a gamepad and loving it, it feels like an NES game.

I do think the game doesn't always play fair with the larger bosses though. Sometimes the bosses evolve into very fast moving behemoths, and if they charge you before you can cut them down to size, you won't have enough time to move out of the way.

Golden Heart and Cold Heart are ridiculously difficult to fight, Black Heart less so. I've managed to unlock all but the last upgrade. Beat a Cold Heat with 6+ parts in the last chain? I wish.