Slightly abstract, visually mesmerizing, easy to play, challenging to master. Waveform is just the sort of arcade experience you would expect from an indie developer. Eden Industries has created a captivating game using little more than a controllable waveform. As you weave through each level, your goal is to nab the highest score possible by manipulating a wave as it bounds through space, gathering light particles and growing stronger with each leg of the journey. 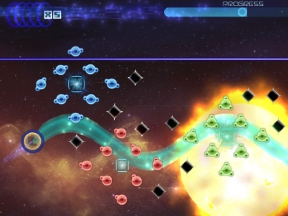 Fittingly enough, everything begins on Pluto, which is a real, full planet that we all love and adore. By using the mouse, you can adjust the length and amplitude of the wave, smoothing out the bumps or turning it into a fierce impersonation of shark dentures. All along the screen, light particles, bonus portals, obstacles, and plenty of other things are placed, begging you to either collect or avoid them. By adjusting the wave, you can, with practice, do just that. Eventually you'll travel to the sun, completing your epic journey and making you feel pretty darn proud of yourself!

Waveform gets tricky in later levels when it introduces things like mines, refracting clouds, distorted stages, mirrors, and more. It becomes a truly challenging arcade avoidance game, but since the difficulty curves up so elegantly, you're never overwhelmed. In fact, even at its most intense, Waveform is a surprisingly relaxing game. 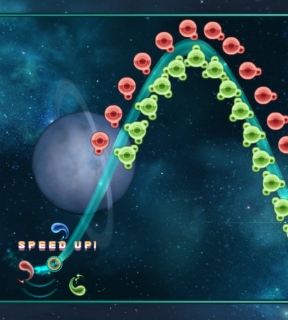 Analysis: You've probably seen a dozen or more games that follow the same basic layout as Waveform. But you've never seen something as polished and utterly entertaining as this. Waveform is built around the idea of mastering the game, challenging you to outdo previous scores and continually striving to gather more stars so you can unlock more stages. It's the sort of game you can blaze through, then feel compelled to go back and fine-tune your skills.

Eden Industries has promised some downloadable content for Waveform that, at the time of writing, has not yet been released. The DLC will include a new planet to waveform yourself through, Deep Space Mode, and, at some point in the future, a level editor. The DLC will be free to anyone who purchases Waveform during its launch window.

If there's any fault in a game as straightforward as Waveform, it's that it doesn't lend itself well to marathon playing sessions. Instead of sitting down and journeying across the solar system in a single sitting, you'll likely want to stop and start again a number of times, simply because the movements get repetitive over the course of a long play. That's not to say the variety or freshness ever wanes, it's just that you pretty much have to adopt a casual attitude when going about mastering Waveform.

With a perfect audio/visual package and gameplay that lends itself well to multiple playthroughs, Waveform ends up being a fantastic arcade game that hits all the required sweet spots. Play it for fun, play it to win, play it for the achievements, or just play it so you can pretend you're a little particle of light zooming around the solar system!

I haven't been buying many games recently, but I heartily recommend this one. Halfway through so far, each new bit of progression has felt smarter and more satisfying than the last.

I'm not sure where the demo ends, but if it ends before Mirrors appear, you're missing out.