If games weren't challenging, we wouldn't bother with them, right? Games create a set of rules that cause certain actions to be difficult, then you, the player, must try to perform those actions. It's a narrow definition, to be sure, but challenge on any level is something that sits at the core of gaming. Each of the games below throws challenges at you in a different way, whether it's via enemies, puzzles, restrictive physics, or a combination of all three. Sometimes you have to form a strategy, but sometimes it's about fighting with the game itself to make it all work. Either way, it's fun. 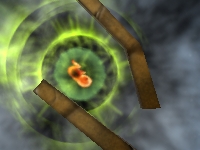 Shards (Windows, 17.4MB, free) - An excellent experimental platform game where you move through levels by gaining momentum via rolling and jumping. It's much more challenging than that description sounds, as sometimes the simplest-looking jump requires you to backtrack and gain considerable speed before attempting it. The creator, Jeroen Stout (Bodilies), considers this a prototype, so don't be surprised if you encounter a few rough edges here and there.

Hydorah (Windows, 18MB, teaser) - A free "demo" for a work-in-progress shmup, Hydorah is old-school in every way. Fight against hordes of aliens through a series of short, intense levels, using primary and secondary weapons you can unlock and select as you progress. There's just one difficulty level, and it's cranked up so high you'll have a rough time even in the first stage. When it comes to retro challenge, this game does not fool around. It's so serious, it warns you before you even get to the title screen. Yeah. If this were an arcade machine, you might as well hand over your roll of quarters up front. Created by the author of 8-bit Killer.

Battle of Tiles (Windows, 18.5MB, demo) - A casual war strategy game at its core (but with liberal sprinklings of RPG elements), Battle of Tiles pushes simplicity to the forefront and delivers a captivating turn-based tactics experience that only gets better as you play. You control a party of knights, archers, mages and priests, each represented by a single tile. Advance through wave after wave of enemy tiles while you arrange your fighters in the best possible formation. Level-up units, swap them with weaker soldiers, bribe enemy units to join your side, and amass a glorious army that can be as many as 70 strong. Bosses are a particular high point in the game, requiring a delightful mix of puzzle solving and strategizing to conquer. It's impressive that a game manages to take tactical combat and strip it to its essentials without losing the fun, but Battle of Tiles has done it well.

What's with the tags? They're different than normal, and when I click on them, they don't even find the weekend download they're on.

I played shards. Tag worked for me. odd/difficult game though. Not even sure of the goal...

Battle of Tiles might be a good game, deep down; but what I saw in the demo was "walk forward, walk forward, walk forward..." until, halfway through the first area (which was, admittedly, a fairly large amount of plodding) the game said "demo over; buy now!". During the demo, though, I didn't really get a chance to see any strategy--I had a line of soldiers, I kept it as a line of soldiers, that was about it. So again, while it's possible that later levels might have more actual tactics, the demo did a terrible job of showcasing them.

I completely second what Tahnan said - it would have been nice to see a bit more of the game, instead of just, well, moving forward. I only bothered to buy a couple of enemies, at that - was so little point to it, I didn't bother. The review mentioned bosses, which would have been a perfect place to stop - just after a boss. As it is, there's nothing there to lure me in, which is a pity, since it *sounds* neat.

Anyone have more info on how to play Hydorah? What do the red and green, and larger blue and yellow powerups do? What does the lucky charm do, besides turn my red powerup count into a letter? Finally, is there any way to increase my speed?

Anyone having trouble playing Hydora? Whenever I start the program, a error message pops up saying "floating point overflow" I'm running windows 7, so that may be the case, but I've tried several different compatibility modes with it. Other than that, it looks like a very good game.

Hmm, for some reason the graphics remind me of the ones in Cave Story, but not of any other retro games'. And speaking of which, that needs to be reviewed again. Might have been the best thing that ever got on JIG.

I have problems playing Shards, it just says error when I try to start it. Anyone have any ideas?