Conspiracy theory time! The order the following games are listed in along with the general theme of their content will, when viewed as a string of text on a single page from afar, show an outline of an Egyptian hieroglyph hidden in the chamber below the Sphinx. At least, that's what we're telling people... Shh! 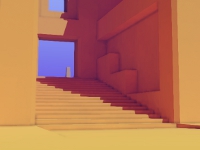 Hubris (Windows, 239MB, free) - Although it's little more than a stunning map to walk around in, Andrew Yoder's Hubris is a surprisingly atmospheric experience that attempts to invoke emotion and set your imagination running around in a world void of conflict or interaction. Simply put, all you do in Hubris is march around and take in the view. There's a staircase, a small tower, plenty of intricate wall work with shadows and small openings, and a door waiting at the top. Despite (or, more likely, because of) the emptiness, you'll quickly become enamored with this small little game.

Yeti Hunter (Windows, 6.8MB, free) - You, are the hunter. The yeti, is your prey. In this snowy world of trees and, well, more snow and trees, it's just you and your gun versus the ever-elusive hairy beast. Trudge through the land in this 3D game as you scour the distant background for signs of the yeti. When you see him, aim and shoot, and hope you're good with a gun. A surprisingly haunting and chilling game from Vlambeer (with a great musical score from Kozilek), especially when it turns into night.

On the Shoulders of Ancestors (Mac/Win/Linux, 10.8MB, demo) - A retro-themed platform puzzle game from Jarnik, On the Shoulders of Ancestors deploys a few familiar ideas in a slightly different sort of way. You re a scientist training Lemonites, small genetically engineered creatures with an unusual life cycle. Each one carries an egg. When that egg is set down, the current Lemonite dies and a brand new one is born. The old one sticks around, allowing you to step up using the carcasses of your ancestors. It's a familiar mechanic that's put to use in some creative ways, and best of all, no matter what any other game says, at the end of each level, you get cake!

Anybody manage to get the yeti? I think I saw it a few times at the start, but I didn't see it again after the first night and I waited about three days.

I'm not sure what there was to become enamored of in Hubris. It took longer to download and install than it did to walk through, and I wasn't exactly running up the stairs. I took a look around, even started over a couple times in case I had missed something. As for the views, I've seen more impressive details in Quake, 15 years ago. If I've missed something, by all means, let me know.

ThenAgain, I think the idea is that yetis don't actually exist. The game mimics what it would be like to hunt yetis in real life. So basically you're just a dupe running around with a gun, ALONE in the cold wilderness; jumping at snow drifts, feeling all ninjatic by climbing trees, and shooting at bushes until you get bored and give up. Happy Hunting!

In yeti hunter, immediately when it turned night I jumped and hit escape. I'm such a manly guy.

I saw him on day one, but I aimed wrong and when I shot, he had ran away. He just left a pile of poo.

Speaking of which, how does that thing crap so much? It's all over the place!

Not sure if I should spoiler tag that, but I will anyway.

JohnB, did you ever see/shoot the yeti when you played it?

I did! I spotted the yeti a number of times and got some good shots off each time. He left piles of blood each time, but that's as close as I could get to killing him, if you even can.