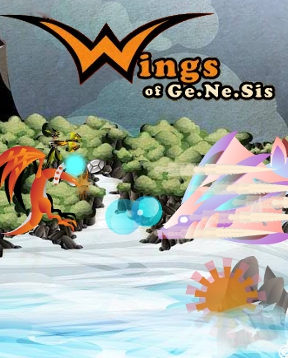 Who hasn't wanted to fly? I'll tell you: penguins. They're perfectly okay with staying on land. You'll never see a penguin in an airplane, that's for sure. For all the rest of us who'd love to take to the skies, though, there's Wings of Ge.Ne.Sis, the new side-scrolling shooter from An Lieu. While the original Ge.Ne.Sis was a console-style RPG, this spinoff takes things in a whole new direction; namely, up and above!

Control your character with the mouse, pointing where you want to go. Fire with the left mouse button, or just tap [A] to turn on autofire and make your life much easier. [1] changes between your two weapons (generally a ranged attack and a melee attack), [2] uses your mount's high-powered special attack, and [3] through [6] use helpful items that you equip before each stage. As you shoot down enemies, you earn two types of currency to purchase items and feed your mount. You also earn experience points and can develop your character as you'd like.

You can choose between the three titular characters at the start of the game. Gelyan has high endurance, earns extra attribute points every so often and has a protective shell for reducing damage. Neraine has high agility and an increased dodge rate, often avoiding damage from what would otherwise be a direct hit and striking back with a powerful counterattack. Sisily has high empathy and her mounts are more powerful, plus she can fire a special beam attack. All the characters are fairly balanced, though Neraine is probably the best all-around choice thanks to her increased dodge rate and resultant longevity.

Wings of Ge.Ne.Sis is certainly an unusual spinoff. One might have expected another RPG, especially after how excellent the original game was, but Wings still manages to stand out amongst its shooter contemporaries. 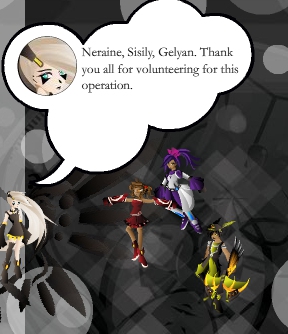 Analysis: There's an immense depth of gameplay here that's unusual for a side-scrolling shooter. You can upgrade your character in a variety of ways, including their attributes, equipment and mount. You can feed your mount either variety of currency and it will evolve based on its diet, but you might want to save some for the shop as well. While it's probably possible to get through the game without customizing or upgrading by using raw twitch shooter skills, you'd be missing out on a big part of the fun.

Wings of Ge.Ne.Sis uses the same art style as the original RPG. It's a surreal aesthetic, appropriate for a game that takes place in a dreamscape. Everything is beautifully animated and it's generally easy to see what's going on even when things get hectic.

The only real flaw in the game is the lack of keyboard control. Mouse control is highly imprecise, especially if you're using a touchpad, so expect some cheap hits. Thankfully the game is fairly forgiving and it's possible to build your character's agility or endurance if you're taking too much damage.

Likewise, while the game's various bosses can be tough, playing toward your character's strengths will usually see you through. The bosses do have a tendency to flood the screen with difficult-to-avoid projectiles, but since you generally won't die in a single hit it's not a massive problem. Practice, as always, makes perfect, plus you earn experience even after being killed.

All in all, Wings of Ge.Ne.Sis is a great choice for shooter fans. The depth and customization on display here make it unique amongst shooters. Even those who aren't necessarily shooter fans but loved the art style and writing of the original game will find something to enjoy here.

What about "learn to fly", the penguin seemed offended by a wikipedia-parody to try and fly.

Surprisingly dull. The storyline and content are generic anime blather, but at least the effort was put forth - however, once you get into the game you'll find a sidescrolling shooter without any intelligent put into it. There's no visual or audial feedback for a kill, and very little ingame sound in general beyond the background music - killing creatures feels more like deleting sprites from the screen using sparkles.

No weight, no heft, no noise, no impact. I couldn't find it in me to care about any given moment of gameplay, and turned it off after a few minutes.

Presentation is important, in flash gaming. It's all you've got, in a game this initially shallow.

should have stuck to RPG gameplay, its what made me love Ge.Ne.Sis. I was so excited to finally see a new one come out, and to find out what happened to our characters (and their summons) after the last game, but was sadly disappointed to see a shooting game with no real link (aside from characters and a mediocre plot) to the previous game.

Im left confused and regretting I ever clicked start...

A good friend of mine regularly bugged me about when a sequel would hit, and was really disappointed when she got a rather uninteresting shooter game instead.

Jakkar really hit upon it - there's just no feedback to the player. No sounds, no effects, I didn't really feel like I was playing the game so much as moving sprites around to make them disappear. The levels also seemed really bland, with nice backgrounds but not much else. While it doesn't need to be as great as Hydorah, a little more variety in the levels would have really helped.

I played two stages and lost interest, as did my friend.

I'm attempting to play through for the sake of the Kongregate badges and getting very frustrated. I'm adding my vote to the other disappointed sentiments here.

Am I the only one that constantly has to think of the powerpuff girls? And why as a grown up man do I know them?

Why does everyone hate this game? Because their is now sound when you kill an enemy? This game is great.

I'm disapointed. I was sooo looking forward to the sequel. I was checking this website contantly to find if the new ge.ne.sis is out. And what I get? A lame shooter game? I loved genesis because of the RPG. If you remove the RPG there is no genesis.

If this was a separate game I`d probably have given it a better rating. But this is not what I was anticipating as a sequel. The first Ge.ne.sis was so GREAT and AMAZING. But this one is just a regular shooting game. Nothing special.

This is NOT a regular shooting game. It is an rpg, look around the game before you post. HATERS GONNA HATE!

with neraine max out power and agility and even RAM THE BOSS!!!!!!!
she DODGES!! the raming and dices him this and the fact that ramming means you avoid the posion and other effects is even awesomer