It doesn't look like it's going to be a good day. The great winnowing has split the world in two, your flower's petals have fallen off, and your other half is missing. If you find it though, maybe you'll be able to return things to how they were, and the world can finally chill. Winnose is a surreal puzzle game by Todd Luke and Calum Bowen. Any other description more specific than that would be nothing more than base speculation. Move with the [arrow keys], timing your movements to reach the exit of each screen. The world changes from orange to green and back again, whenever you step into a portal. 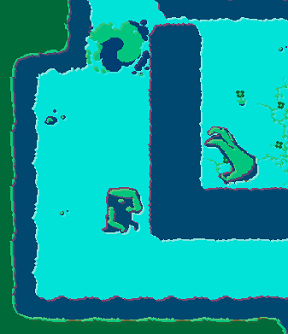 There are other creatures in this world too. When the world is orange, there will be those who will clomp you over in their pattern of movement without a second's thought. When the world is green, there will be those who follow you and snatch you to who-knows-where. When the world isn't, though, they will stay where they are. And then there are mindless brains that now only move when someone is resting on the buttons that control them. Fortunately, when you meet up with your other half, it'll be able to help you out by mirroring your movements. Reunite, and you'll fly off into space and time to stop the winnowing before it began. If the above description seems like a vague recollection of a feverish dream, that's mainly because so does Winnose. However, it's the good kind of trippy: the kind that gamers in the mood for something different or odd actively seek out. If there are deep levels of artistic meaning to Winnose, then this reviewer is afraid he's missing out. But don't worry: you'll be more than content to swim around on the surface with an enjoyable game that takes place in a setting as goofy as it is unique.

I know this is Adult Swim so I shouldn't be surprised, but what did I just play??? That was... odd. Good but odd.

Attention to detail often makes the difference for me in liking vs. loving a game. In this case, when you reach the

and you move left, the music comes out of your right speaker, and vice versa.

So if you replay after the first go there's a timed run. Does anybody know what happens if you complete that? (I was too lazy to finish)

That was seriously weird, in the best possible way of course.

Also - who found the secret room?, if indeed it was a secret.

Top shrooms from me anyway.

I think you get the timed run by entering the arrows in reverse order on the title screen.