Yo, yo, yo, check it out! Dis be da tale of a dog, yo. Not just any dog, but a dawg from da hood. 'Cause the dawgs in the hood are always hard, come talkin' that trash and they'll pull your card, knowing nothin' in life but to show some wit, diggin' bones and spellin' words! Word Up Dog! by Sarah Northway is a fun arcade-style word puzzler with enough attitude for da hood, y'all!

Sorry, won't do that again. A cross between platforming and puzzling, Word Up Dog! is the adventure of a hapless suburban dog who finds himself all up in da underground wit' no way out but to clock some bones and chill wit' a variety of homies who will help or hinder progress as he cruises deep down to find a way out and smack up a few words along the way. Okay, I promise to stop with the gangsta slang, cause there's nothing more pathetic than a middle-aged middle-class lady trying to be street. Seriously. Word to your mutha!

The titular dog was chillin' in his crib until he got hungry you see, so he starts digging in search of some bones. However, each square of dirt he digs costs bones, and if he runs out then he's stuck. Once he gets to a certain point the tunnel collapses and he can't go back to the surface, so he must find a way to collect enough bones to dig his way out by exploring the vast underground area. Fortunately he also digs up letters which he can use to spell words that he can trade in for more bones. As he explores he will also find some animal friends who will help him out with hints, larger light areas, wild cards, teleportation, and even dynamite to negotiate those rocky areas. The first taste of these treats is free but use more and, well, it'll cost ya. Occasionally you will also run across silver or gold letters that, when used, will increase the number of bones each word earns.

Movement is accomplished in three ways, using the [arrow] keys, the [WASD] keys, or simply pointing and clicking with your left mouse button. The dog will move through open spaces or dig through soft dirt, although he cannot dig through rock (this is where the dynamite comes in). Buried in the dirt or sitting in the open pathways are letters or bones, simply run across them (or dig across them) to pick them up. You can hold up to eight letters at a time, and if you want to spell a word that doesn't include one you can click and drag it from your inventory onto any open path where the dog can come back later to pick it up again if you so choose. Each word you form grants you a certain amount of bones based on the size of the word and bonuses will pop up offering extra bones for specific requirements, such as an eight letter word, or a word that starts with the letter "F".

There are two modes offered in Word Up Dog!, an arcade mode that is on a timer and an infinite adventure mode that allows you to play as long as you wish. In arcade mode when you finish up a level and want to go deeper you will encounter a really tough junkyard dawg who will demand payment in bones to pass and continue to the next level, so make sure you seriously hoard those bones and don't spend them all on bonuses. The game is over when you run out of time or if you run out of bones, although you can beg more bones from one of your homies, the Mine Cart Monkey, presuming you can remember where he is and you have enough juice to persuade him.

Analysis: With its combination of cute, cartoony visuals and Compton homeboy attitude, Word Up Dog! is amusing in a white-bread, middle-class, trying to be gangsta kind of way. The juxtaposition between the gangsta speech and attitude of the denizens of the deep with the pretty, child-like graphics make for an entertaining way to sharpen both your platforming and vocabulary skills. Sarah Northway has created one addictive puzzler with Word Up Dog! that will keep bringing you back again and again to try to make more complex words or beat the levels faster. 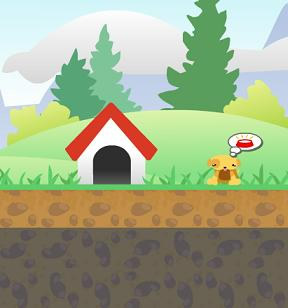 Gameplay is easy to pick up with a short but comprehensive tutorial at the beginning of the game. With the three-pronged controls the game is easy for lefties, righties, or those who don't want to lose their grip on the mouse lest some homie come by and gank...seriously, I need to stop that. Perhaps the only complaint about Word Up Dog! is that the short music clip gets old pretty fast, but there is a handy mute button to silence it once it gets annoying. The rest of the control structure is fantastic, with the ability to pull up help in the middle of the game, the ability to save several games and come back later, and the ability to change from the fake gangsta rap language to the Queen's English (or to French or German if you are so inclined).

Simple to learn with a lot of vocabulary complexity to be found, Word Up Dog! is casual gameplay that can suck you in and give you hours and hours of enjoyment. This fun, amusing, challenging game of spelling is entertainment for a wide range of ages, from those youngsters who want to improve their mad spellin' skillz to the older folks who enjoy a vocabulary challenge. So check out Word Up Dog! and tell 'em your homie GrinnyP sent ya. Word.

This made me think of updog. Has anyone ever had updog?

it would appear that the next level up from 'gongtats' is now...