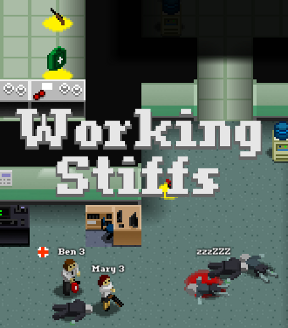 When they told you that you were working in a dead end job, you probably didn't think they meant the slavering, moaning, undead-eating-your-brains kind of dead. InsaneHero, Biscuit Locker, and Peter Baron team up to bring you a corporate game with bite in Working Stiffs. It's your job to use your mouse to guide these 9-5 unsung heroes down through a towering office building filled with zombies. Without George Romero around to provide complex metaphors for humanity's decay and self-destruction, it's up to you to get as many people as you can to safety on each level. It's also a great way of telling if you're secretly a terrible person by administering the following test; the first time you saw one of your little pixel minions beg to be shot when they were bitten, did you giggle a little? Congratulations, we're both officially awful. Hooray!

Use the [WASD] or [arrow] keys to scroll the map, and click and hold to make people follow your cursor. People will automatically dismantle barricades and pick up items or weapons as they run into them. Of course, they'll also die automatically if they run into zombies, so you'll want to stay on your toes and keep them moving as best you can. After all, a dead co-worker is a soon reanimated and bitey coworker. If a creature is in range and one of your stalwart B-movie heroes has ammo, as denoted by the number above their head beside their name, they'll attack. Each stage will get progressively more complex, with more obstacles and missions to complete, and even super-powered bosses. Fortunately, you'll also encounter Just keep your wits about you and use your environment to your advantage; you can push certain objects around to make blockades, frighten zombies off with flames (either with a torch or by setting yourself on fire... if you have an extinguisher), venture into places zombies won't go, and more.

While you wouldn't necessarily call a game about mowing zombies down new, Working Stiffs does approach the concept in a novel way. The "sheep herding" gameplay is an interesting idea, and one that would be a lot more appealing if your people were just a wee bit smarter. As such, Working Stiffs winds up being a game where the patient and the cautious will succeed. It helps if you think of each stage as a puzzle rather than a standard zombie shooter; go slow, plan ahead, and try not to get brains all over you. Working Stiffs deserves some credit for trying something different, and with its dark sense of humour combined with its lovely pixel aesthetic, it's definitely worth a try. Just remember, kids; say "no" to cat pictures.

This is nuts. There's no reason to be holding that mouse button down other than breaking one's finger.

When holding down the mouse to gather the employees towards you, if they're firing a weapon, they stand there like idiots and get mauled. Moving AND shooting would be ideal.

I can sit them right next to a Boss and they won't fire. Anything. I have yet to figure out the mechanics of that, other than suspecting that if the zom's in a corner, there's the old corner-freeze error. And setting the Boss on fire does not affect his hit points. What? It would've been such a nice game otherwise.

This does have tons of replay value if, and only if, you get the hang of the controls. Setting zombies on fire is awesome. (Note: watercoolers also put out fires. One shot, but they're more effective than extinguishers sometimes.)

Scrolling, switching weapons, and selecting individuals/group will be a headache for some, though I beat the game without worrying much about that. Big groups going through doorways was a nightmare, though.

I wonder though, has anyone figured out how to block elevators? The game claims this is possible, but I can't keep getting eaten trying to do it.

I found that if my group runs around or stands in front of an elevator door for a while (backing off whenever it opens to let out another zombie), it eventually becomes disabled with the lights turning red.

"Fortunately, you'll also encounter Just keep your wits about you and use your environment to your advantage; you can push certain"
There's a typo there.
WHAT will we encounter?

so you did not beat the game