This week on our semi-irregular You Are Games feature, we ask you to think back to an era centuries ago. It was a time when castles were all the rage and checkerboard designs started popping up on every tapestry and tabletop. One day, a very bored traveler noted these strange patterns and fashioned a game made from a few of his prized action figures, simulating a war in which horses, round-headed people, and magical walking castles battled to trap their opponent's Plushead. And with this burst of creativity, Plushead Wars was born.

Unfortunately, copyright laws were screwy back then, and the credit for the creation of this game would go to Sir Milton Parker Chess. (The walking castle idea was later borrowed for Howl's Moving Castle.) 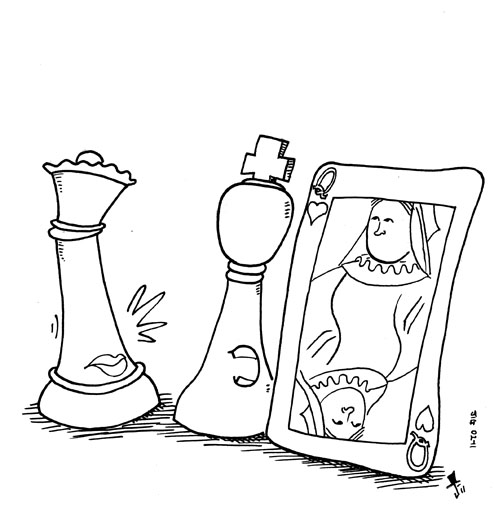 If you're not familiar with how our caption contests work, here's a quick rundown: Babylon Sticks creator and fellow reviewista, James Francis, has created the piece of artwork shown here. Someday (likely a week from now) it'll become a full comic, but it still needs a few finishing touches, including a funny caption. And we're open for suggestions! If you've got a quirky quip that works well with this comic, post it as a comment below (using your Casual Gameplay account). Multiple entries are allowed, but please keep them obscenity-free, suitable for all ages, and tied to a gaming theme (and don't forget that we don't necessarily mean video games).

We have a few more commands from the king:

"...at least she wants to do more than just mate."

"Two dimensional!?! Well at least she doesn't wander off wherever she wants!"

"Next time, the element of surprise will be on our side - allow me to introduce you to our new secret weapon."

And as for mine:

"Well they DO say that two heads are better than one!"

"Honey, have you seen the Knave anywhere? Her tarts have gone missing again..."

"I'm off to croquet. Where's my good flamingo?"

"I'm sorry but she's perfect for me. She hates going to clubs, doesn't want diamonds and calls a spade a spade."

I know you were excited about the promotion, son, but I just felt you needed an expert on the subject to deal with.

Guess who's the Old Maid NOW!

What do you mean that's not the queen?!

Sorry darling, I'm taking the Red Queen out this time for a change.

I just can't keep up with you. Besides, she suits me better.

After all the money I paid, you'd have thought that Dali bloke would have AT LEAST got a good likeness!

And you look nothing like the picture they sent me!

"Do you want to go back to being a pawn?"

"Guess who shuffled out of your closet?"

"I was playing Hearts on the Internet, and nobody else wanted her."

"I won't play pawn to your threats any longer! This is a relationship you're going to have to deal with."

Sorry, my dear. but when I saw her hearts, I was in check for her to be my mate.

>"And why not? At least SHE doesn't try to keep me in check everywhere I go!"

"Quickly honey, suit up. We're going to miss the game."

"What moves does she have that I don't have?"

"That's what they call a royal fork"

"Mom, you said you'd support me, even if I dated outside of our game!"

All I can say is that she captured my heart and that trumps everything.

"True, they don't talk much, but I've come to love them just the same."

"I just thought you'd like to know that I've found a Queen who understands her place."

"I had no idea that's what she meant by 'tarts', dear, but I'm sure the pawns will be back when they're finished."

"Life is a game, my dear; you've got to learn to play them all."

"What do you mean it doesn't look like you? I paint what I see!"

"I never thought that a blind date would pan out either, but my friend Alice kept insisting. Now we just need to find the bishop..."

I'm tired of your bad checks ruining my credit.

Yeah, I know it ain't really smart. (This is for us older gamers)

Your internet dating profile looks nothing like you. Check Mate...

I do see the basic theme already here, but here was mine:
"Well, of course it doesn't look at pretty as you, honey, it's *abstract*. It's all the rage!"

Does my ass look big in this?

Look yourself in the mirror! You're such a two-face!

Why did I look under the mattress? You don't sleep!

"First you give me all that crap about inner beauty and looks don't matter, and now you're hooking up with some anorexic bimbo?!"

She's got a bigger heart than you!

"What do you mean your side already captured our Queen?"

"Cheating? I swear it's really my Queen."

"People know cards better than chess, so why would I stay with you when the average HOG player doesn't even know you're a queen?"

"Hey, can you do a bi-game marriage for us?"

Well, when she leaves you and you're stuck doing the whole solitaire thing, don't come running back to me!

"Interracial? No, it's called a 'crossover'."

"What? I think a pair of queens is a decent combination."

"This 'White makes the first move' rule is quite controversial. I suggest we too find an abstract symbol representing our clan to be more politically correct."

"(whispering) Uh-oh. You better run. Last time she had that look, we ended up declaring war against the black pieces."

Face it, lady: You didn't make the cut.

"Do you have to make everything so black and white?"

Also +1 more for luckydee, I hope that one wins.

"Oh, come on! You get to meet a lot of pieces while you're outside. Why can't I?"

"I'm sick and tired of playing your games!"

"I'm sick of castling everytime I want a little space!"

"I'm sorry honey but Mommie would approve...she's pure royalty, not some promoted pawn."

"We ain't over till the...you met her at singing class didn't you!"

"If he ever breaks your heart too, at least you've got a backup."

"EVERY pieces on the board wants to get you, and YOU get jealous over ONE card?!"

"And here is your portrait Queen Mona Lisa."

"Er... Aren't you supposed to be in another castle?"

But honey, if we invite over the black king and queen we have a full house!

Oh god, this thread is full of puns...

I'm not feeling particularly creative at the moment, so I'll leave this to the experts.

"She's got hearts, tarts, and a slim figure... and when it comes right down to it, you're offensive."

"Hey, just because our queen got spilled with coffee on the last game doesn't mean we couldn't find a replacement!"

"Hey, just because our queen got spilled with coffee on the last game doesn't mean we couldn't find a replacement!"

"Hey, just because our queen got lost under the couch during the last game doesn't mean we couldn't find a replacement!"

"Let's face it. You are the most powerful piece and I'm the slowest. You can go wherever you want and I can't move without fearing for my life. Every pawn wishes to be like you, but none of them can become like me. Since I can't call for gender equality without causing the conservationists' wrath, I'm emigrating to a card deck!"

"Just because you didn't like Avatar, doesn't mean you have to cutback on all things 3D."

I know, hon, but she's got this awesome flat!