Something has gone terribly, horribly awry at Don Eduardo's zoo. Flesh-seeking undead animals are on the loose and you, plucky boy or girl, are the last line of defense in Zoombies: Animales de la Muerte!, a mobile line-drawing defense game from High Voltage Software. Could this be the worst field trip ever? 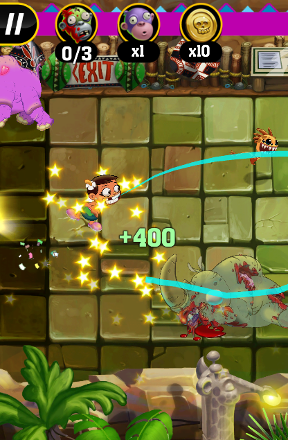 Zoombies plays like a mashup between mobile stalwarts Plants vs. Zombies and Flight Control, liberally seasoned with doses of guacamole and topped with hordes of crazy-cute zombie animals. Here you defend your territory by drawing a line on the screen with your finger, which your boomerang-like weapon follows. As your weapon hits the oncoming baddies, they explode in a cheerful fountain of cartoon guts and gore. Saving Little Mexico from the zoombie onslaught may seem easy at first, but don't get complacent: the challenge ramps up in the second set of levels, where enemies with different attack patterns demand quick reflexes and intelligent use of unlockable upgrades.

Ah, upgrades. What would a defense game be without them? Zoombies has plenty, from new weapons to help you defeat specific enemies to traps that slow down and damage oncoming foes. These are purchased with currency that is gained by downing baddies and completing challenges. Each level has five specific challenges to complete, like saving a certain number of friendly zoo animals or drawing under a specific number of lines. New levels are unlocked in sets of three by completing a set number of these challenges.

All of these elements combine in a well-managed ebb and flow of challenge and achievement, which makes Zoombies a gratifying play. At only forty-five short levels the amount of content might be a little small, but the polished production and zippy, well-balanced gameplay make Zoombies a star among the app store's !ever-multiplying zombie horde. ¡Viva la defensa!

NOTE: This game was played and reviewed on the iPhone 4S. Game was available in the North American market at the time of publication, but may not be available in other territories. Please see individual app market pages for purchasing info.