A Wonderland Story from Alchemy Games probably isn't what you expect from a colorful, expertly-illustrated mobile game. It may look like a platformer, it may even have the intense reflex requirements of a platformer, but really, it's a game of fast puzzles and quick planning. And it just happens to be set in the strange, strange world of Alice in Wonderland, only this time, Alice is the villain! 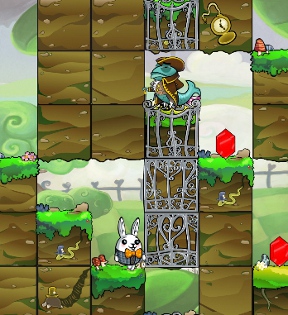 In A Wonderland Story, you play as the White Rabbit, a character who is perpetually late for every conceivable date. Hopping down the rabbit hole one day, you're followed by a meddlesome little girl who proceeds to give chase. It's your job to help the rabbit keep pace ahead of Alice, but instead of controlling him directly, you move the game world around. Slide each row of blocks up or down with a quick swipe, positioning gaps so the rabbit can continue forward unimpeded. Maneuver enemies to line up with each other to create gems you can collect. Missing a gap or hitting a foe doesn't kill you, but it does slow you down, and in this game, time is vitally important!

Because of the level design and the somewhat crude checkpoint system, A Wonderland Story can feel like participating in a marathon as opposed to a quick pick up and play diversion. Stages are large and take a while to complete, and instead of breaking each into selectable sections, you have three worlds populated with linear save spots that must be worked through in order. This discourages going back to perfect your scores, which is a shame, but at least you can stop in the middle of a level and resume at a later time without any hassle.

A Wonderland Story is an unusual and very beautiful game. It's quite a bit different from most other casual offerings out there, which should put it on your radar right away. The mechanics even perk up a bit once you start using power-ups, so get ready for a simple but marvelously entertaining retreat down the rabbit hole!