Though it sounds like the sort of bananas-crazy concept that would get you fired from your babysitting job for introducing to impressionable little kids, Jay Armstrong's fuzzy-wuzzy blood-soaked action-platformer Bearbariansis somehow horrifying, fun, and adorable! As the surviving hero of the land of Bearbaria, you're leading and upgrading a group of rag-tag heroes through a series of bloody deathmatches to eventually avenge your village. Use the [arrows] to move and jump, [A] to use a melee attack, and [S] for ranged. Most battles are a race to a certain number of points, with a point earned for each kill, so move fast and fight hard! If you die, you can respawn instantly, and even choose if you'd like to do so as one of the game's four various classes. Each class has its own strengths and weaknesses, so go with what works for you. Between levels, spend that hard-earned moolah on weapons, armor, and hats for both you and your AI-controlled teammates to buff up your abilities. 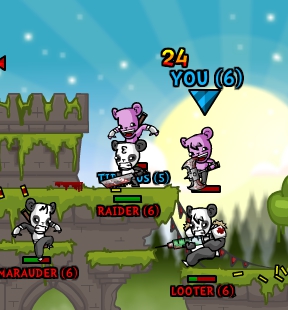 It's weird. It's silly. It's even a little horrifying if the concept of cuddly-wuddly animals cheerfully beating the stuffing out of each other disturbs you. But Jay Armstrong's off-kilter sense of humour and beautiful, colourful style makes this game stand out in a way that few others do. It is, of course, sort of undeniably chaotic. When I was a kid, I wheedled my grandmother to play Primal Rage on the SNES with me, and though I giggled and laughed at her slowness and bewilderment, Bearbarians is probably the closest I will ever come to feeling like she did that day. It's sort of Super Smash Bros meets Team Fortress 2, all frenetic action and team-based pummeling, and at times it can be almost too chaotic... especially since your AI party members often feel like they need to be carried. If you love bear-beat-bear beat-em-up action, however, then Bearbarians just might be the fanged, clawed murderer you'll love to make a playdate with.

The game is pretty fun. It's unfortunate that the art is such a Dan Paladin rip off. :(

Just because the artwork may remind you of Dan's work, doesn't mean Dan was ripped off. Artists are often influenced and inspired by each others' work, and it's possible for two artists to share similar styles, too. There's nothing unfortunate about it, it's a great game.

I have 3 words to describe this game:
BEST. GAME. EVER.

Just one thing, dose it save your progress? I got pretty far in the game and I don't want to lose all my progress.

This was a fun and good game but one of the complaints I have is the exp system... I know that there are equips up to lvl 18 but i could never get them b/c I was only able to lvl up to 9 before I finished the game... I killed over 400 things too (which I'm pretty sure is where you get exp), & unless I loss exp for dying (which kind of sucks, especially for these kinds of games), I'm not sure what I could have really done to get that much more exp to lvl up to 18 and get the equips before the game ends.

Good game, but i agree that the level system is too slow.
The challenges are easy enough, and if you set it on easy you'll have no problem.

The only annoyance is when all 4 enemies clump on one or two platforms and you can't take them out.

Anyone got any tips for the capture point levels? That's the only thing i don't have 3 stars in.

One other comment is there either needs to be a way to skip/fast forward the results & money screen or a replay button. When I am defeated or want to get a better star count I don't want to wait for that stuff.