Blocks That Matter, an indie game from Swing Swing Submarine, likes to do things a little bit differently. It likes to break the rules, mix up genres, tear down that fourth wall, and borrow the best from some of the most popular games ever released and turn it into something new. Blocks That Matter is part Tetris, part Minecraft, part Dig Dug, part platformer all wrapped into one, with a cute main character leading the whole thing up that serves as the perfect gateway to a game you won't be able to get enough of. 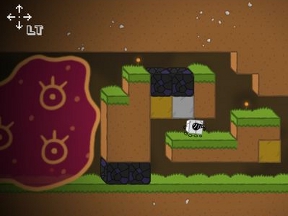 Two indie game developers, Alexey and Markus, are in trouble. As Tetrobot, their unfinished creation, you're the only one who can save them. Tetrobot can drill blocks on either side and bump them from below, slowly turning them into collectible pieces of material. Each material acts differently in different circumstances, so sand won't hold its position unless something is beneath it, ice slides all over the place, and obsidian is... well, geez, who could hope to drill something like that into a usable item?!

The other, more brain-taxing part of the game is arranging blocks to meet your needs. Pausing the action in Blocks That Matter, you can place blocks in groups of four at a time. Arrange them to form steps, bridge gaps, hold enemies at bay, or otherwise help you through the stage. You can also clear groups of eight blocks at a time, something that almost always has grand consequences on the environment's landscape.

Blocks That Matter never pulls its punches when it comes to level design, and you'll have to utterly master the block laying mechanisms in order to get anywhere. As you progress, you unlock new abilities, uncover new enemies, and learn new tricks for dealing with blocks in your path. You'll have to utilize a touch of trial and error in order to get through, but it's only the game's gentle learning curve easing you in to the game that matters! 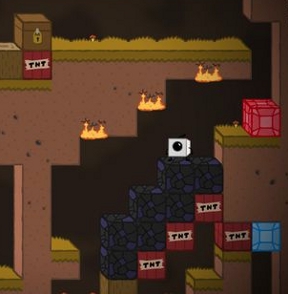 Analysis: It's easy to see the source material shining bright in Blocks That Matter. Material types from Minecraft, block arranging from Tetris, for example. But the game doesn't directly rip off anything from another game, opting instead to mix everything up to birth something surprisingly new. A little bit of action, a little bit of puzzle solving, a little bit of humor... this game has got it all!

In-jokes and buried secrets are two things that stand out of the experience in a very muted sort of manner. Finding the secret treasures in the levels isn't necessary to beat the game, but you know what? You'll really, really want to do it. Because they're filled with in-jokes surrounding the indie gaming scene. It's also another way of rewarding players for exploring the levels, something that's never easy to do given the premium you'll place on blocks from time to time.

The learning curve is the only real obstacle standing between Blocks That Matter and absolute perfection. It's shallow, but protracted, and figuring out all of the tricks to solving block-based puzzles can be enormously frustrating at first. Once you get it, you get it, however, and it's worth putting in a little bit of time to experience the wonder this game has to offer.

Scream in frustration, laugh with delight when you solve a puzzle, raise an eyebrow at the questionable antics of the game's villain. All of these and a whole lot more await you in Blocks That Matter, a game that will matter a lot to you after just a few minutes!

Actually, it's also based off of Boulder Dash.

So, how do you parse the title? Is it "Blocks That Matter" as in, "these cubes are very important", or as in, "interfering with this substance"?

This game is a lot of fun. My only qualm is with the bonus level "Extreme Temperature" ... argh!

@HeroForce That's the beauty of the title - it's both.

This is so much awesome!

My heart melted a little (in that warm cushy kind of way) when one of the treasures referenced Boulderdash in one of the first levels! Great game! Figuring out solutions encourages just the right kind of pleasure centers in the ol' noggin.

I love it. I'm amused by the way that the blocks borrow from Tetris, not just in the tetrominoes theme, but also in the way you can destroy all rows of 8+ blocks just like Tetris does (okay, it's 10 in Tetris).

Platform puzzling with material types and bonuses to go for = win.