I didn't choose the box life, the box life chose... Oh, shut up. Anyway, Box Life by tequibo is a strange little game – part metroidvania, part rat-in-a-maze experiment, but in a good way. All you have to do is escape the box. All you can use to do this is, in a word, nothing. At the beginning, you can only move with the [arrow] or [WASD] keys and use the mouse to look around. What you see isn't exactly encouraging, because you seem to be in a huge room made of blocks, but you'll start making sense of the whole thing soon enough. 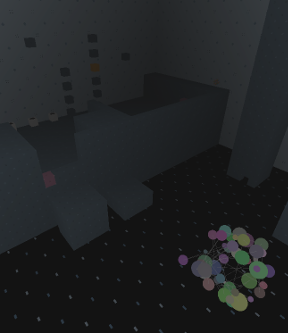 In a game where there's little to do and even less to do it with, snooping around is of the essence. The room is small enough to explore without being afraid of getting lost, but although it might seem empty at first, it still hides a bunch of items necessary for your escape. It is almost impossible to talk about the gameplay without giving anything away, so let's just say that it is devised in quite an ingenious way. You will gradually be given abilities which, with their cryptic explanations, function both as puzzles and hints on how to solve them. Escaping the box isn't the end, though; the room contains several cleverly concealed secrets that you can look for if you want to feel especially good about your investigative skills. Once you finish the game, you have the option to go back with all the abilities already activated, which should make the task easier. Even if you play it twice, Box Life isn't a long game, but its minimalistic appeal, intelligent environment design and shrewd gameplay won't leave you indifferent.

1. Activating all of the Orange Boxes

3 are in plain sight. One is in the lower room and another is in a hidden room covered by the big blue wall, accessed by going to the lower level and revealing it somewhere in the middle.

Only managed to find 1 secret, but I'm going back for them all! I have a hunch that one of them is gonna take a long time to get to...

Xelkelvos: The secret you're missing is:

In one of the pillars in the deep end of the room. The one that's 8 blocks high.

This was a fun little diversion ^_^

Out with all six secrets!
The one Xelkelvos didn't find was:

near the back wall, in the 4th-shortest of the pillars.

I love games like these. Would love to see more, too.

Well, 3 secrets now, but I'm gonna need help finding the rest. The ones I have are:

- The one underground, by melting an ice block.
- The one gotten by turning all orange blocks pink.
- The one up top of a very high tower.

Oh, lovely, absorptive diversion. I especially liked how non-twitchy and forgiving the physics were.

But what's the deal with the wibbly-wobbly ball-and-stick thing on the lower level? Just a toy?

Beautifully done, and oddly satisfying. Silent George is absolutely right-- the physics and navigation is so manageable I'm playing a puzzle, not a platformer. And somehow it's spooky, too!

Out. With a martini.

This is driving me nuts. I have definitely seen this, or something very very similar before.

The mechanics and graphics orbs blocks etc are identical but I cant quite put a finger on it.

Okay - it IS an old game I have played before, I am not going mad !

Cheers for the help on the secrets,

I figured some yellow boxes just didn't turn purple if they didn't turn with a couple of shots.

And now with added Martini.

So noone will help me find the last 3 secrets?

This game is easily over 2 yrs old, I played it elsewhere ages ago and it took a look time to work out the depth perception for jump (mines screwed anyway due to my eyesight). I wish I could remember where the cube that lets you fly is.

I'm up to jump, double jump, change size (currently no use), throw fireball and reveal all hidden. Abnd I've placed 3 of the 4 globes.

So, can we get a walkthrough with a location of everything including secrets, screenshots of those please?

i cant get what the

a secret, not an ability, so it does't do anything, it's just fun to find them all :). The abilities always come with a little explanation (and don't have question marks on them).

The game itself looks great, but I can't seem to play it properly. The character keeps moving diagonally forward-left by itself but it changes direction if I hold down a different direction key for a second or so.

strangely compelling, but I'm using a mac, so as soon as "right click" came up, I stopped playing