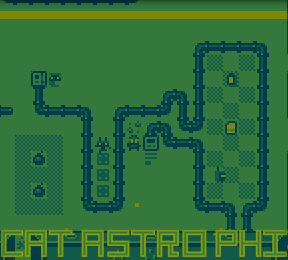 Picture the Internet User personified, and imagine making a game for this stereotypical entity. If you're like me (and who isn't?), your creation would likely feature space rangers, robots, cats, elves, zombies, pirates, ninjas, and nostalgic appeals to growing up circa 1987-1994; which, I believe, pretty much covers everything the platonic Denizen of the Web could ever crave. Minus the ninja-pirate elf-zombies, Cat Astro Phi, a retro-styled action adventure, is exactly that game.

You play a plucky astro-pilot with an ill-defined though doubtlessly heroic agenda, who keeps crash-landing onto planets with hostile, labyrinthine space bases, losing your steadfast feline companion in the process. You move with the [arrow] keys, and fire, when you find a weapon, with either the [spacebar] or [alt] keys. Your job is to recover enough power cells and find your missing kitty before blasting off for the next planet to crash-land upon. You'll also need key cards to open doors and boxes to push into obstacles, if said boxes are not obstacles themselves.

Players will likely recognize the familiar handheld game console that Cat Astro Phi is mimicking, and the game looks the part. The green-tinged, four-bit graphics smell of pixilated authenticity (a good smell, I promise), and the music sets the era and is awesome besides. As an exercise in nostalgia Cat Astro Phi succeeds, and lucky for us, it is also a dandy little action game. I wish some aspects of the game were better explained, like how to neutralize the fatal "acid mud," or that the impossible space-shooter mini game between each level is really just a device to get the player to crash and experience more planetside gameplay. But the level designs are clever, encourage exploration, and feature all kinds of neat, surprising little things to do in your mission to recover your cat and be spacebound again. Cat Astro Phi is a nice, short action game with retro appeal, and even players who aren't the targeted allegorical Internet Citizen will find something to appreciate.

Check out the excellent soundtrack for Cat Astro Phi, composed by Rich Vreeland. Listen to samples, or buy the entire soundtrack to download for a measly $3. For a free download of the soundtrack, use Casual Gameplay account to leave us a comment, telling us how far you'd go to rescue your space-cat (or other space-pet, real or imagined). Submit your comment by December 24th, and we'll give one deserving commenter a free download of the game's soundtrack. Update: Congratulations to lvlsomething! We're sending you a code to download the soundtrack free. :)

How far would I go to rescue my space cat (named Checkers)? Well, I'll tell you. I would travel to Pluto, in nothing but frilly underwear. I would fight hordes of zombies WITHOUT a shotgun! I would give up the free soundtrack download! I would even..... I would even GET RID of Casual Games JUST to save my poor space cat. Heck, I would...

SHUT OFF THE INTERNET

As for the game, lovely stuff. I really dug all the Aliens references.

I would refuse to rescue my space cat because of how sad i'd be on account of still using batteries to power things.

How far would I go? Well, let's put it this way: I would not give up my space gerbil for a Klondike Bar.

(Side note: Take this comment out of the free-download raffle, I'm buying it as we speak. I will always pay for awesomeness when it's deserved, and this soundtrack is definitely worth the 1.5 sodas.)

Fun stuff, but the credits shouldn't be so self-conscious about the pronunciation of φ. Only fraternities pronounce it "fie".

How do you override the laser? I run into, the time counts down, but I can't get thru.

When you get the the laser control panel...

there's a series of numbers shown on screen. Type in these numbers in order before the time runs down.

Very nice and funny game. Only one thing, there are not clear dead policy - you can easy cheat.