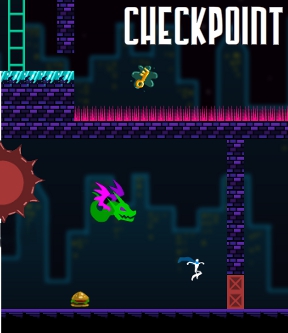 Checkpoint is a quick-fire arcade platform game that's as much about avoiding things that make you die as it is getting killed. Created by Hero Interactive (Bubble Tanks, Storm Winds), Checkpoint goes the extra mile and taunts you with running commentary on each level, reminding you why you're a terrible gamer, questioning your every move, and laughing at you when you fail. On top of that, you're being timed and your deaths are tallied, so if your ego isn't crushed by Hero Interactive throughout the course of the game, just wait for your pitiful final score at the end!

Use the [WASD] keys to move, tapping [W] to jump and [S] to crouch. You can jump off of walls as well as slide along the floor, performing smooth acrobatics just like the classic browser game N. Those moves won't make things any easier, though, as this is a game about speed and stepping on your own dead body to reach that coveted checkpoint!

All you have to do in each of stage is make it to the glowing checkpoint at the end. Usually there's a door blocking your way, forcing you to climb around to reach a key. Standing in your way are dragons, snakes, spikes, sawblades, and all manner of dangerous things that will make your bescarved self bite the dust faster than you can say "I have a scarf!" Deaths are tallied, but don't let that discourage you, as sometimes you need to die in order to proceed.

Giving running commentary the whole time are lines of text at the top of the screen. Generally, the words of "encouragement" are less encouraging and more taunting in nature. Sometimes, though, you'll receive a hint or two about how to progress. One such example is using your own dead body as a platform to cross dangerous spikes, or even using your corpse to hold down buttons so you can pass. Even though it hurts, pay attention. And try not to let your feelings get hurt.

Checkpoint gets really creative with its level design later on, introducing more and more ways to kill yourself and use your own death as a means to progress. The difficulty is higher than most casual browser games, though not so impossible that you won't be able to complete it in one short sitting. If the punishing sting of character death is your thing, Checkpoint is a rather epic arcade game that never lets up on the action!

No saving my state? Guess I won't finish this one.

The later levels are maddening

I don't like complaining about difficulty based on the quality of controls. Of course, levels are designed with the physics of the controls in mind.

What I will complain about is that my system experienced some slowdown even on the low quality setting. The machine is a 3-year old laptop at this point, but Flash is rarely a problem.

I think I topped out at 231 deaths in under 20 minutes. The only thing that kept me going was the cryptic message "You don't know how you keep coming back, do you?"

I continued playing looking for an answer to no avail. No explanation or silly frame story. That was frustrating.

The first invisible level is ridiculous. I've died over 100 times in that level alone, and there doesn't seem to be any key or switch that I can find, especially with a dragon chasing me. I quit.

Wen a good 80% of my deaths are due to the irritating "friction" physics, that's bad design.

Also... was there a point to this? No story, no reason, no excuse, no nothing? I mean, I like simplicity, and I am as glutted on Portal Flash tributes as anyone, but when it said, "You don't know why you keep coming back, do you?" that sounded like there was an actual answer.

This game was tough but doable up to a certain point. Eventually when I was wall jumping up to a door and falling to my death due to the way it freezes you as you go through, for a good 5 minutes straight, I knew I was done.

I've been breezing through these levels, but this one is stumping me.

Invisible walls, platforms, and what seems to be an invisible door in the bottom right corner. I've been jumping around trying to find the invisible key for about ten minutes. Is there an answer to this one, or did my game just bug?

Hopefully power of the post will kick in immediately.

I HATE WALL JUMPING - with no save feature this was awful.

also stuck at the same point as kgy121.

two stepped platforms in the middle, with a seperate column on the right side of the screen.

I think the invisible level is a bug. I played through to the end, and none of the levels I played were invisible. Unless the levels are randomized, in which case I suppose it might just not show up for everybody.

Yeah, no idea what these 'invisible' levels everyone is talking about are - I completed it and experienced none.

I think my only major qualm was that you couldn't slide down a wall for an indefinite time. That was incredibly annoying.

Okay, at first this game looked like it could be fun. I like platformers, and the "dropping corpses on spikes and then stepping on them" idea has been used before, though I forget exactly which game, and if I remember right it was pretty well-used.
But the player character has WAY too much momentum. He moves WAY too fast, and won't even stop when his hands are clearly holding onto a ladder, for instance, among several other things. Also, if I slid under a wall and stood up, that wouldn't kill me. There is no reason for that to kill the player character at all, and it is very counterintuitive and annoying. Speaking of counterintuitive, as has already been mentioned, sliding down a wall should not be a thing that has a time limit in a walljumping-intensive game like this one.

I think there are just too many game designers who don't understand the following inequality:
cheap deaths =/= challenge

Don't like this. I was just about keeping going despite the "meh" factor, until the invisible level. I couldn't find any way to die on it though - just a bunch of platforms and a blocked-off door at the right. One big resounding "meh" from me.

i think the "invisible" levels people are talking about is a bug.. and would like to link to a screen shot i took of one of these levels i encountered.
i did "draw" some red lines with mspaint to describe where i think the walls are so maybe someone can recognise it and say if it actually is a bug or not.
i just gave up at that point. but might help someone else..

I'm stuck on the level with the four portals, and you have to go through the one in the top lefthand corner then somehow make your way onto the platform on the new screen without being killed. I don't know how to do that. Anyone know?

What is the point of the invisible level. How do you even get past it when there's no keys or checkpoint. Help! Please!

ugh, so annoying! I'm stuck at the level with 3 spikey spinny things, how do i get to the key? Please help.