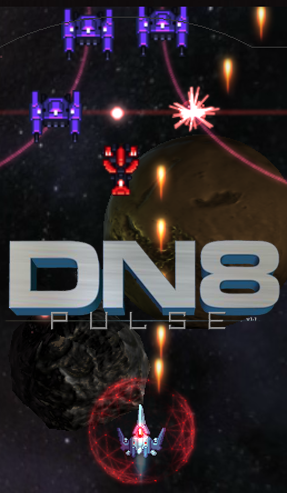 A good story is great, but sometimes you just want to blow stuff up. In DN8: Pulse, a new shooter game from
Squize, you are the commander of a puny little fighter who has to fight off swarms of enemy vessels if you want to live to make it to the next space port.

Your ship fires constantly, but you have three options for moving your space hulk around: [WASD], [ZQSD], or the mouse. Most players will want to use the mouse to exercise the most control over their craft. If you survive the initial waves, you'll have the chance to upgrade your ship with extra shields, weapons, and even support pods. There are two upgrade paths, defensive and offensive. Veterans of the bullet hell genre will be at home with offensive, while newbies and more casual pilots are advised to take the defensive route. You are only hit when a bullet touches the red center of your ship, a concept that can take a moment to get used to. There's also a concept called "grazing", where if the red core of your vessel slinks past a bullet, but doesn't get hit, then your "graze bar" fills up, and you get points towards an extra life, and later experience points for upgrading.

The clear selling point of DN8: Pulse are the graphics, done in Stage3D, which are unlike most anything you've seen in a flash game. The visuals are in a word, stunning, and it's a lot of fun to play a shoot-em-up that leaves the conventional, retro pixelated setting and dares to take it to the farthest reaches of the universe for a truly immersive experience. Upgrade junkies will also find plenty to satisfy them here, and the way the authors built the difficulty settings into the upgrade path is also creative. However, while the biggest draw to the game is its boundary-pushing graphics, it is also its biggest drawback, since certain computers might not be able to handle it. It's possible to change the graphics to minimum, but this alters the game dramatically, and they will be better off playing the prequel. The game is a near clone of the original with upgraded visuals, so those expecting new mechanics will be disappointed. But while there is no story to anchor yourself to, the graphics are so good, you can almost feel the bullets zipping by your cockpit as you play.

Fun little diversion, but what's with the very final message? Not hugely impressed by something that seemed rather puerile.

Fun fact: the "Pause" and "Quit" signs are also translated into.. braille.. :)

4,928 Views
1 Comment
chrpa— Jayisgames needs your help to continue providing quality content. Click for details It's always a perfect time for a hot spring bath, but at the end of winter it's one of the best things you can wish for. Unfortunately, unless...  ...

1,503 Views
0 Comments
chrpa— Jayisgames needs your help to continue providing quality content. Click for details Welcome to Weekday Puzzle! For a start we have a brand new puzzler by Robert Alvarez (rob 1221) and it's not an easy one. The comes relaxing...  ...

2,880 Views
21 Comments
chrpa— Jayisgames needs your help to continue providing quality content. Click for details Welcome to the latest Weekday Escape! Selfdefiant wants you to escape from two more U.S. states and this time it's a brief visit indeed. In mental hospital,...  ...

1,624 Views
0 Comments
chrpa— Jayisgames needs your help to continue providing quality content. Click for details Welcome to Mobile Monday! After few months a new escape by Jammsworks arrived and it's excellent. After you escape Maldives, you end up at another island in...  ...