Despite what my past review history might have led you to believe, jumpscares are actually my least favourite horror game mechanic. It's not that I don't appreciate them... in the right hands, jumpscares can be extremely effective. But when you have nerves of glass and a tendency to stay wide awake at night after reading creepypastas, jumpscares make gaming... less than relaxing. So I was a little hesitant to check out Lag Studio's free indie action adventure Spooky's House of Jumpscares, because, well... it's right there in the title. The jist of things is that you've come to a house with a bad reputation to discover if the rumours are true and learn all of its history you can, but when you arrive, you find yourself instead greeted by a cute and harmless looking ghost girl named Spooky. She tells you that this is her house, and challenges you to make it through all 1000 rooms (though only 760 are currently available in its playable Early Access state), and at first, it seems like a walk in the park. After all, most of the rooms are small and empty, and it seems like the worse thing you have to deal with is a "spoopy" cardboard cut-out of a wee slime monster or other beastie popping out from the wall every now and again. But the notes you begin to find soon make you realize something more sinister is going on, and soon things begin to go very, very wrong. There's nowhere to go but down... how long can you last? 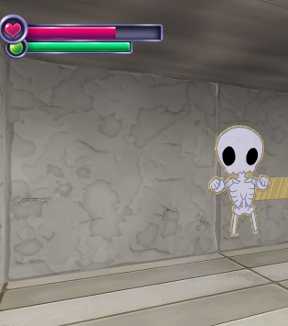 The controls are very simple... use the mouse to look around, [E] or the [spacebar] to interact, and [WASD] to move, with sprinting enabled while holding down [shift] as long as your green stamina bar isn't empty. Both your stamina and your health regenerate over time, though the latter does so much more slowly. The rooms you'll encounter are random in their order apart from certain fixed occurences, and mostly your goal is simply to go forward, with save points appearing every fifty rooms in the form of purple crosses. Though you may giggle at a ghostie or three nervously as various harmless cardboard cutouts pop out when you least expect it, you'll want to stay on your toes, because eventually you'll start encountering... well, you'll see. There are actually a variety of dangers, and they only get more elaborate and disturbing the farther you go, and largely your only defense is to run. Each danger has its own unique set of "rules" that govern both how it behaves as well as things you'll want to watch out for as signs they're near. As of this writing, Spooky's House of Jumpscares is currently unfinished, with everything beyond room 760 simply being an endless march of randomized rooms with no more story or unique content, though the developer plans to release the game in full (and still for free!) in the summer of this year.

There's a lot to be said for the way Spooky's House of Jumpscares eases you into its wrongness, like settling into a comfortably warm bath only to realize too late the temperature keeps climbing. In addition to shout-outs to everything from classic Japanese horror movies, Five Nights at Freddy's, and more, the atmosphere is excellent warped from its initial harmless, goofy cuteness to shocking degrees until you never know what will come next, and you won't trust anything you see. It's a simple game, but also a very effective one even though the foreshadowing is so heavy you could never really mistake it as innocent even if it didn't have that big ol' warning screen at the start. The downside is that while 1000 rooms sounds impressive, you'll quickly realize that very few of them have anything whatsoever of note, and many of them repeat over and over. Disorienting, sure, but also quite frankly tedious in a way that for some players will keep the tension from mounting, to say nothing of the way you can get stuck or hung up on the edges of walls, furniture, or pits. The lion's share of the game is simply trotting from one door to the next, though it is worth exploring some of the larger areas if you're looking for lore and easter eggs. The game sparks to life each time some new threat is introduced, however, and when you are thrown up against something particularly menacing (or suspect one might be about to make an appearance), it makes each new style of room particularly harrowing, especially when the overall style begins to deviate even more drastically from the bright, shiny environments of the beginning. It makes for an uneven experience, bouts of alarm or curiosity sparked by notes and other rare interactive items liberally padded with long stretches where nothing at all happens. This makes Spooky's House of Jumpscares geared more towards players who do enjoy a game that is all about trying to make them jump. With minigames, secrets, and scares galore, Spooky's House of Jumpscares is well worth checking out if you enjoy devious ghost girls and don't mind a game that actively tries to kill you. Despite its slow pace and padding, it shows a lot of promise, and the full version will be something to keep an eye out for.