When you arrive at your friend Kate's house, all alone in the middle of nowhere, you find the building empty, though not without signs of a struggle. And other kinds of signs too... the sort you find scrawled on the wall that makes you question your childhood friend's sanity. Kate, it seems, has apparently been dealing with some unsettling things... hallucinations, strange sightings in the woods... all just the result of an unstable mind, of course. Unless... they have something to do with that event both of you experienced in your childhood but had repressed until only recently. Parsec Productions, Blue Isle Studios, and Marble Hornets present Slender: The Arrival, a full-fledged indie horror action-adventure that expands on the concept of the original Slender game. Call the cops? Nah, it's cool. Just grab that flashlight and head off into the darkened woods where you heard the scream all alone. It's a great idea, and I'll have your Darwin Award all polished up for you when you get back. 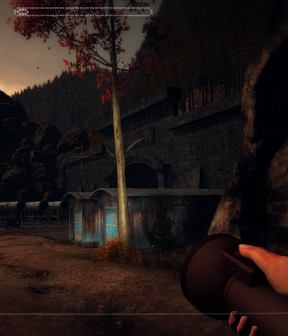 Use [WASD] to move, and hold [left shift] to run. The game is presented in a first-person view, and the mouse will let you look around, as well as aim your flashlight when you pick one up and turn it on (or off!) with [F]. Right-clicking with your flashlight turned on will cause you to focus the beam, which can temporarily stun certain enemies. If an item highlights when you mouse over it, that means you can click to interact. Many objects in your environment also have contextual actions, such as, say, clicking and holding on a window, then pushing the mouse up to lift it. Notes and papers you gather can be viewed from your scrapbook by hitting [ESC] and selecting the option from the menu. The game is broken up into stages, featuring some more typical adventure gameplay that forces you to search for keys and the like, but also hunt for items in locations that shift each time you play... along with the lay of the land itself. You can't save your game, but the stages are relatively short and stay unlocked once you've accessed them. So, you know, no big deal if you're ripped to shreds and your body is never found somewhere dank and dark because you can just start over again, right? Right!

Analysis: The mythos surrounding Slenderman (created by Eric "Victor Surge" Knudsen, with rights licensed to the team developing this game) is fear of the unknown at its most basic... something hunting you that you can't understand or escape. Slender: The Arrival plays on this expertly. The atmosphere is so heavy, so ominous, that it sucks you in regardless of what you know of the mythology behind it. Graphically, The Arrival is a huge improvement over the original, and the lush use of colour, lighting, and environmental design creates a world that pulls you in from the get-go. You dread every corner, every closed door, and the oppressive mood will have you jumping at every shadow... including your own. Its masterful use of ambient sound brings every locale to life and infuses it all with a sense of palpable dread. I was a particular fan of the way your footsteps echoed in the heavy silence of an abandoned building in the second stage as the noise of forest life faded away, and by "was a fan of" I mean of course "I whimpered and hated every second of it and cursed the name of all involved". 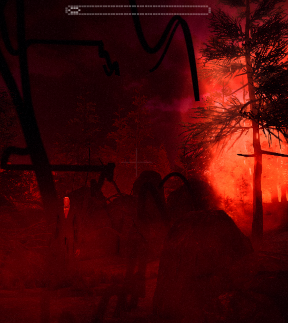 Of course, setting and style will only get you so far. The gameplay itself is both simple and has its frustrating moments, mainly since mouse-guided contextual movement has always been sort of awkward. The frenetic chase sequences and "find X amount of Y" objectives for the stages means this definitely isn't one for fans of more laid-back horror, or for those who would have preferred more overall variety to the gameplay. Figuring out the mechanics of each assailant takes some experimentation, which is sort of hard to do when you're stumbling around panicked and blind in big maps that change each time you die.

It is, in a word, harrowing, and something that's easy to put yourself into. You're not a space marine or a super soldier. You're not even armed. You're an ordinary person, lost and alone, being hunted by something unknowable. The titular menace is significantly more aggressive and feels like a more active hunter, relentlessly pursuing you through the dark no matter where you go. The appearances and accompanying video distortion are even harsher and more violent than ever before, and the new menace in later chapters is just as terrifying. This is a game that goes from slow and sinister to frantic and snarling in the span of a fingersnap, and you'll need to be fast to survive. And a fan of jump scares, naturally.

Since the story is relegated mainly to the letters and other notes you can find scattered throughout the game, the narrative definitely takes a back seat to the action. Unless you really make a point of scouring every inch of your surroundings, it's easy to miss that one vital scrap of paper that sheds more light into what's happening. Slender: The Arrival is an atmospheric and engrossing experience, though not a particularly long one, and something most players will probably charge through in a single sitting. Considering the random gameplay, however, it's replayable in the same way its predecessor was, and if you liked that, you can be certain you'll love this one. Expanding on the mystery without losing any of the important mystique, it's a gorgeous nightmare than fans will love to get wrapped up in for as long as it lasts.

Current Goal: Get to Kate's house

Current Goal: Search for clues as to Kate's disappearance

Current Goal: Investigate scream beyond the back gate.

Current Goal: Activate the generators to power the elevator and escape

Current Goal: Secure the house by locking 8 windows and doors

Find a way out of the forest fire

Current Goal: Get to Kate's house

Current Goal: Search for clues as to Kate's disappearance

Current Goal: Investigate scream beyond the back gate.

Current Goal: Activate the generators to power the elevator and escape

Current Goal: Secure the house by locking 8 windows and doors

Find a way out of the forest fire

Urgh. I was watching a playthrough of this on YouTube. Scary...

In the next section, you've got to activate 6 generators. It's not Slenderman you've got to worry about, it's something that almost exactly resembles the Grudge. Only bipedal. It can apparently attack you twice, with the second attack killing you. It also appears to be afraid of the flashlight.

And yes, Slenderman has a chance of appearing in here, although he doesn't seem to be actively pursuing the player.

Cool game. Something you may not know.

When you first beat the game, you unlock a hardcore mode. Try beating the game again in hardcore mode. You get a little something extra for the effort